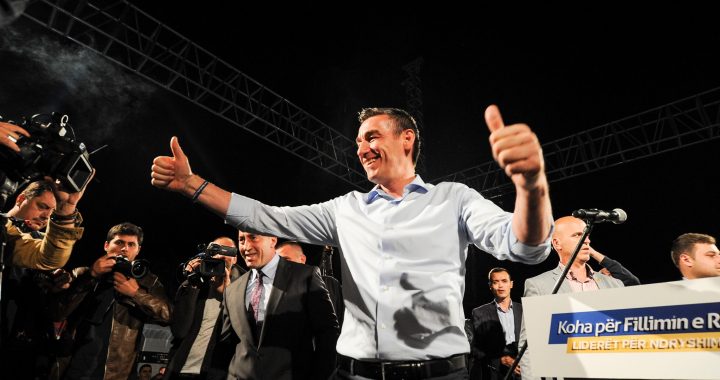 A major coalition of 14 parties, headed by the Democratic Party of Kosovo, PDK, the Alliance for the Future of Kosovo, AAK, and the Initiative for Kosovo, NISMA, came first in the Kosovo snap elections held yesterday.

The coalition, led by PDK head Kadri Veseli and AAK head Ramush Haradinaj, who was also the coalition’s PM candidate, won 34.6 per cent of the vote, according to Central Election Commission, CEC, preliminary results.

Running alone, Vetevendosje came in second with 26.75 per cent, while the grand coalition between the Democratic League of Kosovo, LDK, the Alliance New Kosovo, AKR, and Alternativa, came third with 25.81 per cent.

The preliminary results published by CEC account for the 91 per cent of the vote, but exclude domestic and international absentee voting, as well as special needs voters.

“ Today, bravery has won over fear, and hope over desperation. Both hope and bravery have won wholeheartedly,” said Kurti.

Just after midnight as crowds of Vetevendosje-supporters started dispersing, the PAN coalition gathered on the other end of Nene Tereza boulevard.

“I want to thank AAK and Kosovo’s next Prime Minister, my friend Ramush Haradinaj,” bellowed Kadri Veseli, the head of PDK. “The victory of the New Beginning is a great victory for the people of Kosovo, is a victory for our entire sacred republic of Kosovo.”

According to the Kosovo Central Election Commission, CEC, there were no major incidents reported during the voting process.

However, BIRN revealed that the coalition between PDK, AAK, and NISMA, were planning to infiltrate polling stations with politically affiliated observers registered as members of civil society group called the Regional Institute for Democracy, Human Rights and Political Studies, KALLXO.com revealed on the morning of Sunday’s elections.

Earlier during the day, a coalition of NGOs called Democracy in Action noted 4,928 cases of family voting. Most of these reported cases were people helping their elderly family members at polling stations.

The snap elections were called when the Kosovo government fell before its mandate should have ended, when 78 MPs backed a vote of no confidence in the administration.

The opposition has been demanding elections for two years, mainly because of controversial agreements that the government signed in Brussels in 2015 on border demarcation with Montenegro – that is still to be voted on in parliament – and on establishing the Association of Serb-majority municipalities.