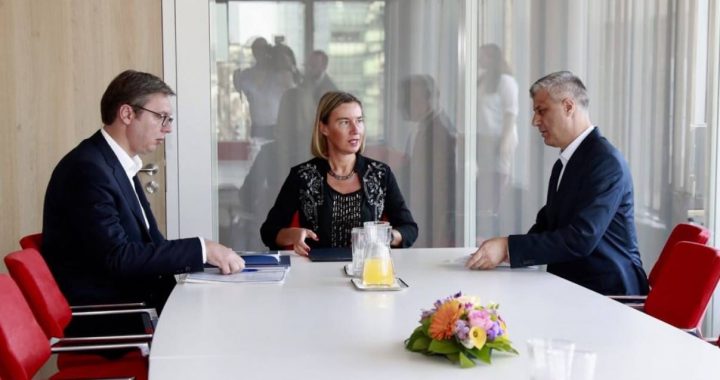 The Kosovar and Serbian Presidents met with High Representative Mogherini  to discuss the normalization of Kosovo-Serbia relations.

Kosovo President Hashim Thaci and Serbian President Aleksandar Vucic held a meeting to discuss normalization of relations between the two countries on Wednesday.

The Brussels-mediated meeting hosted by the High Representative for Foreign Affairs of the European Union Federica Mogherini is the second encounter as part of the high level dialogue between the two heads of state.

The talks, which began with a meeting of the two presidents on June 24, aim to reach a legally-binding agreement between the two countries.

In a press conference after the meeting in Brussels, President Thaci said that he “still sees a light at the end of the tunnel” and that Kosovo’s commitment to a European future is serious.

“It was a short meeting, not an easy one, it was very difficult, possibly the shortest and the toughest of all meetings that we had in the last six years,” Thaci said.

Thaci also said that Serbia still sees Kosovo as part of itself and lives with the mentality of the past. He also admitted that there were many difficulties ahead.

“We discussed about the European future, the dialogue process, the normalization of relations and the final agreement between Kosovo and Serbia, and about other concrete steps regarding visa liberalization,” explained Thaci.

Addressing the media after the meeting, Serbian President Vucic was brief and emphasized that a compromise solution would mean dissatisfaction for both parties.

Vucic also affirmed his commitment to continue the dialogue and that Serbia was committed to finding a solution.

Echoing Thaci, Vucic also said that these talks were not easy at all. “It’s not an easy position for either of us, at all. But we need to continue to talk to find a solution for the future.”

A press release issued today by the European External Action Services, EEAS, said that Thaci and Vucic agreed to meet again in a few weeks to continue their work.