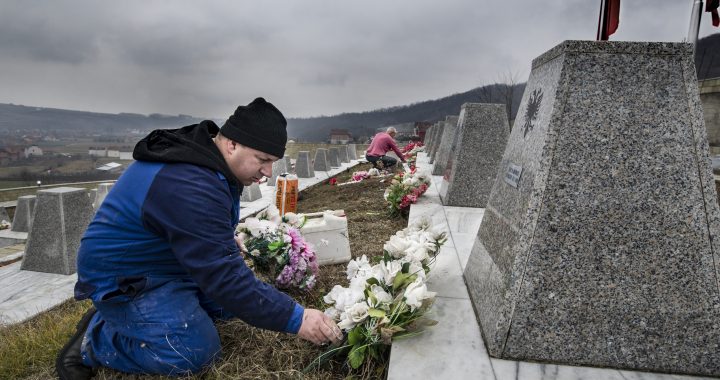 Workers fixing the memorial before the commemoration on January 15. | Photo: Atdhe Mulla.

Kosovar officials have universally condemned a statement made by Serbian president Aleksandar Vucic, in which he repeated claims that the Recak massacre in 1999 was “fabricated.”

A statement made on Thursday by Serbian President Aleksandar Vucic, in which he described the 1999 Recak massacre as “fabricated”, has sparked outrage in Kosovo, with Kosovo president, Hashim Thaci, outgoing prime minister, Ramush Haradinaj, and outgoing minister for foreign affairs, Behgjet Pacolli, all condemning the comments.

“I see officials from #Serbia denying some of the worst crimes against civilians that happened in Europe, confirmed by ICTY, like #Reçak,” Thaci tweeted. “Serbian genocidal policies cannot be defended. They must be denounced. Peace, reconciliation, justice cannot be built based on denying crimes.”

Pacolli also took to Twitter, describing the statement as “shameful and disgusting”, while Haradinaj stated in a Facebook post that the comments evidenced Vucic’s “pathological hatred of Albanians” and that Serbia “shamelessly preserves the criminal mentality inherited from Milosevic’s time.” Vucic previously served as Minister of Information under the leadership of Slobodan Milosevic, including at the time of the Recak massacre.

The Serbian president’s statement came in response to news that Lista Srpska MP Ivan Todosijevic had been convicted for inciting ethnic, racial or religious hatred by the Basic Court of Prishtina, over comments made about the Recak massacre at a ceremony to mark the 20th anniversary of the NATO bombing of Yugoslavia. The Recak massacre, in which 45 Kosovo Albanians were killed by Serbian forces, was one of the incidents that helped spark NATO’s intervention.

“The reason for the [NATO] aggression in our country was the so-called humanitarian catastrophe in Kosovo, and the fabricated Recak [massacre in 1999],” Todosijevic, a former minister in the Kosovo government said at the ceremony in March this year. “The Albanian terrorists are the ones who made all this up and committed the biggest crimes in Kosovo.”

Judge in the case Musa Kongjeli told BIRN on Thursday that Todosijevic was sentenced to two years imprisonment, a decision described as “draconian” by Serbian Bishop of Raska and Prizren, Vladika Teodosije, and criticized by the Serbian government’s so-called ‘Office for Kosovo and Metohija.’

Speaking in Sabac, Vucic described the verdict as “terrifying” before repeating Todosijevic’s claim. “Members of the Serb List, too, will repeat the same thing, and I am repeating it now: the crime in Recak was fabricated,” Vucic told reporters.

The Serbian President went on to question William Walker, chief of the OSCE ceasefire verification mission to Kosovo who visited Recak on the day following the massacre. Walker described what he saw as a “crime against humanity” and insisted that the victims were civilians, following Serbian security forces’ claims that the casualties were all members of the Kosovo Liberation Army, KLA.

“It was all falsified by that global fraudster, scammer and swindler Walker,” Vucic said on Thursday, reportedly adding that he would repeat the claim that the Recak massacre was fabricated every day.

Bekim Blakaj, the head of the Humanitarian Law Center in Kosovo, a transitional justice organization that has dedicated itself to ‘documenting facts that will assist Kosovo society to deal with its violent past’ and seeks ‘to counter denial and political manipulation of human losses’, described Vucic’s statement as “worrisome.”

“It explains that the region is far from being able to accept the crimes committed in the past,” Blakaj told Prishtina Insight. “The denial of war crimes by Vucic puts things back to the very start. Instead of admitting the pain and loss of all those involved in the Recak massacre, Vucic is just scratching the wounds that have not healed 20 years later. He is denying the pain.”

Outgoing Minister of Foreign Affairs Behgjet Pacolli has called on both the European Union Office and American Embassy in Kosovo in to condemn Vucic’s statement, while Thaci’s comments put the future of the dialogue between Kosovo and Serbia, currently suspended due to Kosovo’s imposition of a 100 per cent customs tariff on Serbian goods, into further question.

For Blakaj, the incident shows the failure to successfully deal with the past in the region, and the difficulties of moving forward. “It is not the first time that Serbian officials deny the war crimes committed in Kosovo and elsewhere in the former Yugoslavia,” he told Prishtina Insight. “[But] such a statement should not pass without consequence: an apology-would be the least thing. I don’t know how the parties will sit at the discussion table after such a declaration.”

The EU have been mediating the dialogue between the two countries since 2011, with a common future inside the Union seen as the path to reconciliation. But for Blakaj, tolerance for denying war crimes now threatens the whole process.

“To be honest, the international community has continually tolerated such stances from Serb officials for the sake of a facade of stability,” he said. “If such language is tolerated, I don’t know how we could live together under a European umbrella – if the region ever manages to gain accession to the EU.”

Responding to Prishtina Insight, Alceo Smerilli, the EU’s Press Officer for Neighborhood and Enlargement, stated that: “One thing is clear, there is no place for negating or relativising the events which took place in Racak in Kosovo in January 1999. Denial and revisionism are contrary to the values of the European Union and are contrary to the project of integration of the Western Balkans into the European Union.”

*This article was amended to include the response of the European Union.