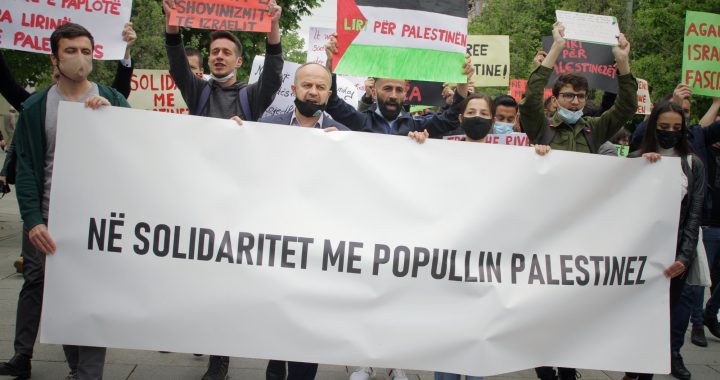 We must have room for a plurality of views on the world.

Often regarded as one of the world’s longest running conflicts, sometimes with a latent quietude but regularly embroiled in sporadic offensives, the dispute between Israel and Palestine has once again come under the spotlight in recent weeks.

The transmitted images of rockets and rubble did not leave any space for indifference, with opinions often split into polarised camps, including in Kosovo.

Kosovo society has long been divided over the conflict, even before the establishment of formal diplomatic ties between Kosovo and Israel. However, it wasn’t until the recent outbreak of violence in the Middle East that public reactions took the form of protests.

For some Kosovo citizens, the treatment of Palestinians by the Israeli authorities, in addition to being perceived as violations of international humanitarian law, painted a familiar picture, reminiscent of the systematic oppression and expulsion of Kosovo Albanians from their homeland in the 1990s.

However, others have voiced support for Israel’s right to self-defense, as well as their claims over the disputed lands of the West Bank and Gaza, the latter of which is, for the most part, internally controlled by Hamas.

Meanwhile, the Kosovo Government followed many of its western allies in voicing support for Israel’s right to defend its citizens from Hamas’s rockets while urging both parties to seek a peaceful solution.

In fact, Kosovo often finds itself pulled in both directions in regard to the Israel-Palestine conflict.

Mutual recognition between Kosovo and Israel in 2020 and the subsequent opening of a Kosovo embassy in Jerusalem earlier this year have generated heated domestic debate, and led to criticism from the EU, Turkey, the Arab League and, naturally, the Palestinian authority and Hamas, who accused the Kosovo Government of “appalling biases.”

However, with this defiant act of opening an embassy in Jerusalem, going against EU foreign policy in the process, Kosovo has proved that it can pursue its own interests when it comes to foreign affairs.

Kosovo and Israel share a major ally in the shape of the United States, who have a longstanding foreign policy goal of finding a comprehensive solution to the Israeli-Palestinian conflict, and normalising ties between other Arab states in the region.

Kosovo-Israel relations are in their infancy and have a long road ahead. However, according to Remi Daniel, an expert at the National Security Institute of Israel, despite Kosovo’s lack of political power in the international arena, the relationship can advance via development projects and deepening economic ties. Perhaps these can even occur in cooperation with Israel’s newest allies, which include the UAE, which has expanded its presence in the Western Balkans.

Meanwhile, although Palestine’s current situation cannot be compared to that of Kosovo’s, there are echoes when it comes to the right to self-determination. The Palestinian people have long sought sovereignty over a claimed territory, which has been granted to them, to some extent, by allowing them certain freedoms, their own set of laws and limited powers over the West Bank and Gaza Strip.

Comparably, Kosovo has also sought to exercise the right to self-determination, to the point of declaring independence and acquiring a number of international recognitions, but while remaining in a form of statehood purgatory.

Regardless of these shared experiences, Kosovo-Palestine relations are currently in a state of deep disrepair. No attempts have been made in connecting the two and there has been no direct contact between them. Despite this, many Kosovo citizens joined protests against what they described as Israel’s fascist and chauvinist attitude towards the Palestinian people, calling for freedom for Palestine.

One day, the Kosovo state could look to build on this widespread sympathy for the Palestinian cause and seek to establish economic, educational or cultural agreements with the Palestianian authorities from which both sides can benefit. This would help remove the barriers that have emerged and create space for genuine future cooperation.

It should be added that Kosovo’s pro-Palestine protestors must be free to voice their opinions. In a democracy, criticising Israel’s actions should not automatically be equated with anti-semitism, and opinions should not be influenced by political persuasions when it comes to human rights violations.

Our society can simultaneously support Israel as a newfound ally while criticizing its actions that cause harm to an already fragile peace. No one should feel stigmatized due to their opinion, especially in a situation in which remaining indifferent is all impossible.

What should not be tolerated under any circumstances is the prevalent spread of hate speech on social media, which became widespread after the conflict arose. Not only does this incite hatred, but it could lead to even more serious incidents in the future.

Kosovo should always look to serve as an example of inter-faith tolerance, and of a multicultural society that leaves no space for hate crimes or ethnic division.