Wheelchair User Finds Life in Capital of Cars a Struggle

In the urban jungle of Prishtina, wheelchair user Faruk Kukaj has enormous problems moving around his city, accessing basic services – and even casting a vote.

With fear of being hit by cars, Faruk Kukaj, born with cerebral palsy, drives his wheelchair along the traffic-filled road every day. With no other choice, between the pedestrian sidewalk and the vehicles, he tries to find freedom in movement– a dangerous freedom.

A series of obstacles that have accompanied him throughout his life in the public spaces of Prishtina, limiting his ability to participate in social and cultural life, prompted the 58-year-old to sue the Municipality of Prishtina for discrimination. He requested 320,000 in damages.

On October 21, the Court of Prishtina partially approved his demand, obliging the Municipality of Prishtina to compensate him for non-material damage, but only for 5,500 euros.

In the first known court case of such nature, Kukaj will file an appeal against the Court’s decision because the request obliging the Municipality to regulate  the infrastructural access has not been approved, nor the full amount requested for the damage caused to the plaintiff.

In an interview for Prishtina Insight, Kukaj said that seeing how few changes were being made in Prishtina to provide access to public spaces to wheelchair users, he decided to demand his civic rights by suing the municipality.

“In this way [by suing the municipality], I demanded my right to be given the opportunity and be provided with appropriate support. Why should I be deprived of all social activities, considering I am equal under the Constitution? The institutions should also think, not just me,” he told BIRN.

Kukaj’s life as a wheelchair user is even more difficult since, in the absence of the necessary infrastructure, he cannot access necessary health and social services because the facilities do not have slopes and, when they do exist, are almost impassable for wheelchairs.

The same problem hampers his social life. The lack of ramps and suitable toilets in bars and restaurants prevents him from going out to cafes and the cinema, or for lunch with friends. The same applies to the sidewalks, which according to him are totally unsuitable for wheelchair users. One wheelchair in a sea of cars

While driving his wheelchair between the cars on the asphalt from his home located at the Faculty of Arts in Prishtina, to his workplace in Dardania, Kukaj hesitates for fear of being hit by a car.

A small wheelchair among the cars in a city like Prishtina, resembles a drop of water in the ocean.

Not all drivers show care and respect to drive more appropriately when they have a wheelchair user nearby. Even if he feels danger on the road, he cannot go up on the sidewalk because they are high and have no drop.

“Usually, I drive on the road because on the sidewalks there are either no pavement drops, or they are blocked by cars. I have never come across a place where I can say, ‘Here I’m free and can move very freely,’” says Kukaj.

Seven or eight years ago, he was hit by a car, which caused great damage to his wheelchair.

“I was hit by a car at a bus stop at Tre Sheshirat. I crossed the white lines and got out on the other side of the road. Luckily, I didn’t suffer too much damage, but my wheelchair was damaged,” he recalls.

According to him, if the city sidewalks were lower or had a drop where a wheelchair could climb, his life would be much easier.

Near his office, there are about 30 stairs and next to them a slope that is impossible to ascend with a wheelchair.

While showing BIRN how impossible it is to climb that slope, which you can hardly even climb on foot, Kukaj laughs, thinking about how they designed such a high slope, interrupted by steps.

Kukaj does not have a car that you can place a wheelchair in; he almost always travels in the wheelchair. But in winter, when it is yet more dangerous because of the ice, he sometimes uses public transport. But even this public service does not meet the needs of wheelchair users.

“Buses have ramps for us wheelchair users, but it’s hard for me to get on because they don’t park in the right places where I can freely get on or off. When the bus stops, I can’t jump from the road or the sidewalk. But there are times when the conductors help me,” says Kukaj. 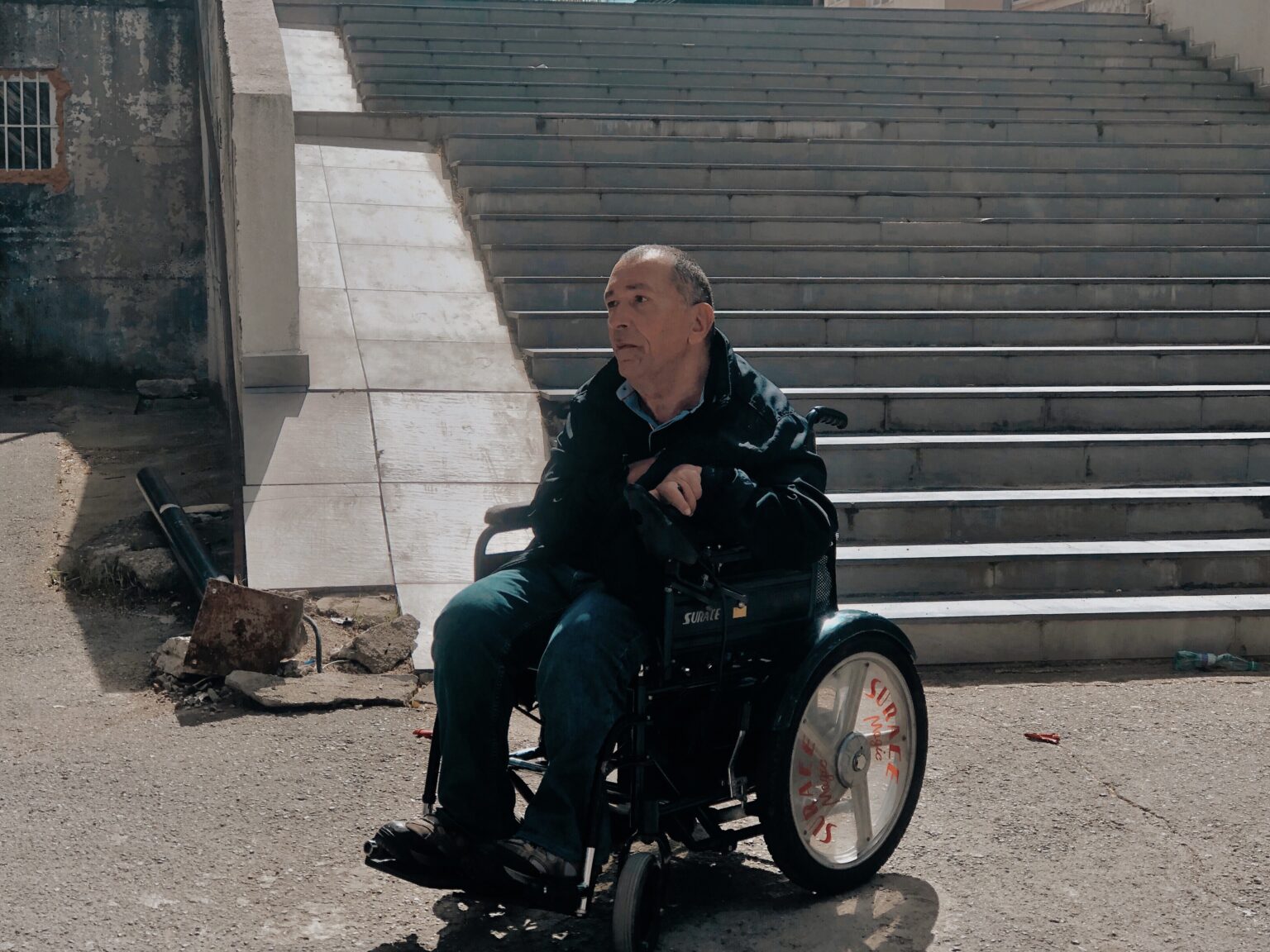 Buildings with stairs cause Faruk Kukaj extra frustration. The lack of internal and external slopes in most institutions prevent him from accessing basic services.

A few years ago, due to a skin problem, he sought help at the Family Medical Center, where services are offered on the third floor. After he managed to get to the building, he went to the Department of Dermatology at the University Clinical Center of Kosovo. But due to the stairs, he was forced to receive services under the open sky.

“There were many stairs and luckily it was in May and it was not cold. The doctors came out, undressed me and checked me outside,” he says.

“Passers-by looked at me like I was in a movie. It was a very heavy and difficult day for me,” he added.

About 12 years ago, when he went to parliament to discuss the needs of people with disabilities, he fell due to the inappropriate leveling of the floor and suffered a deep crack in his head.

“In family medicine centres in recent years, they have made slopes outside, but inside there is no toilet for people with wheelchairs – or there was a toilet but they made it into a store room – or they only have services on the upper floor,” he says, voicing his concern.

“There have been cases when I was in the municipality, and I asked where the toilet for wheelchair users was. They showed me the place but when I went, it was closed, and they couldn’t find the key. What now? I forced the security guards to break the door,” he recalls.

Kukaj has even been prevented from even expressing his democratic right to vote. Kukaj’s polling station was on the second floor of the Faculty of Philology in Prishtina. It was impossible for him to climb up about 30 stairs and the building has no elevator or internal slopes.

“I asked them: ‘Can you bring down the ballot box?’ But they said no. So I said that I reject conditional voting. I demand the right to vote freely like every other citizen of Kosovo,” he says. 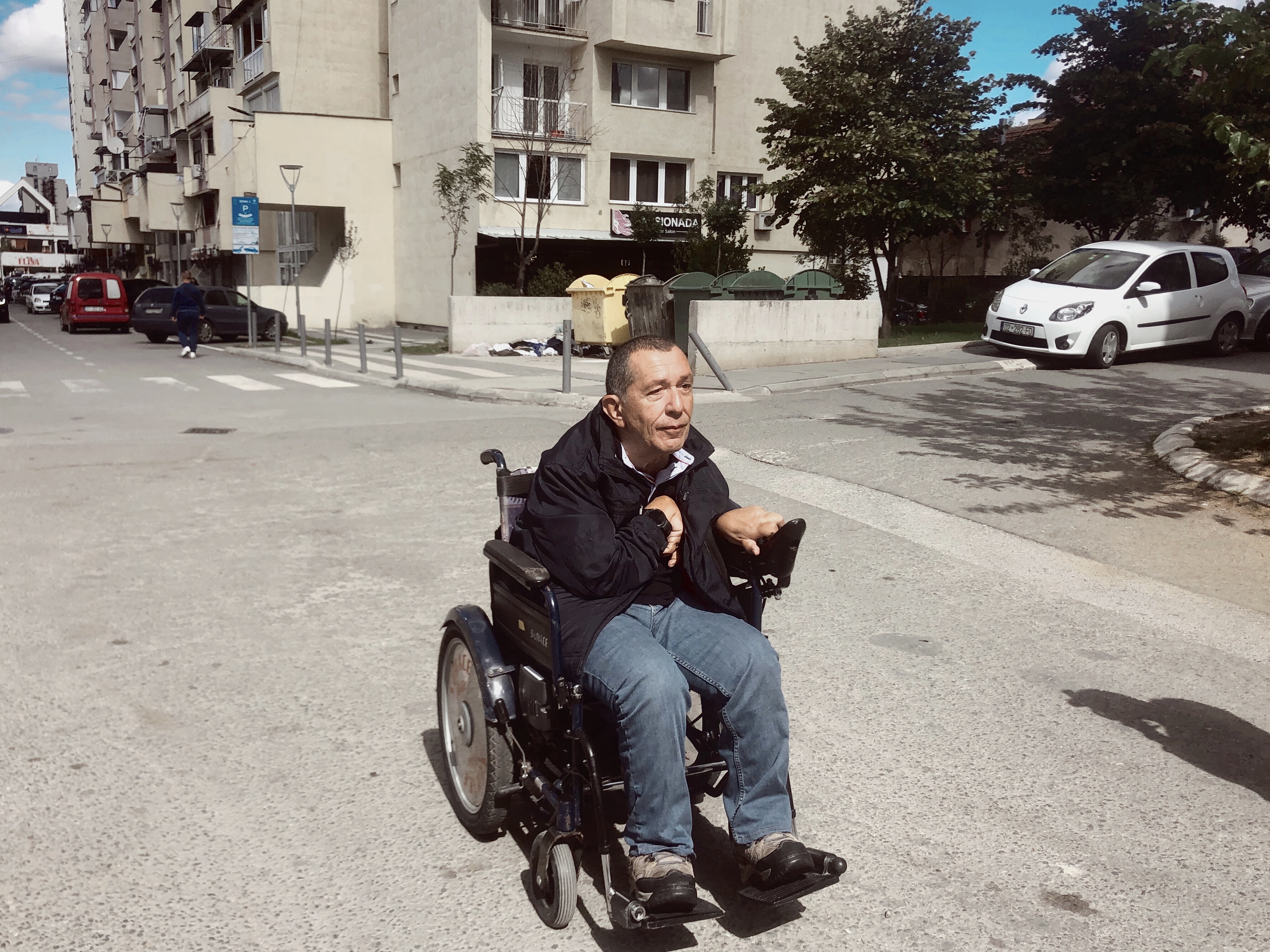 Only one cafe he can go to

Sitting in the office where he spends most of his time, Faruku, while drinking his third cup of tea, shows how much he would like to go out for a coffee in one of Prishtina’s bars.

But the only place he can go for coffee is the bar at the Palace of Youth and Sports. No other place without a terrace has a wheelchair ramp.

“There is probably somewhere I can enter, but then when you enter, you won’t have other suitable services. In the centre of Prishtina I do not know any place I can go to. Almost all of them have stairs. So I can’t go out except in summer, to somewhere where there is a terrace,” he says.

According to him, he has been deprived of a social life.

“Even if I enter somehow with the help of others, I have to think a lot about what to drink or eat, or if I have a physiological need, what to do if there is no accessible bathroom,” he says, dejectedly.

After spending his entire life in a wheelchair, with all the challenges of his city, Kukaj calls on all wheelchair users to act and demand their rights, as guaranteed by the Constitution of Kosovo. He will not stop until his demands reach the right ears, he says.

“I don’t have a place anywhere where I can say, ‘Here I can move very freely,’” he concludes.

by Antigonë Isufi
Next: Big Deal