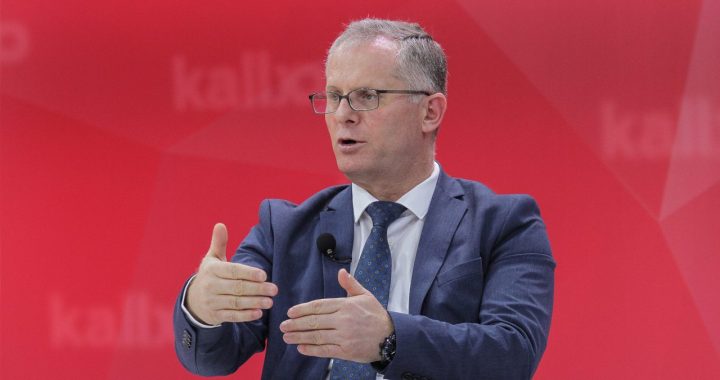 Deputy Prime Minister Besnik Bislimi was unable to join a panel discussion in Belgrade and ordered to return to return to Kosovo after Serbian authorities announced 'security concerns' about his visit.

Kosovo Deputy Prime Minister Besnik Bislimi was due to address a Belgrade conference on Friday via video after his planned visit to Serbia’ capital was banned before it started, on Thursday.

Serbia’s Interior Ministry did not reply to BIRN’s request to explain the reasons for the decision by time of publication.

Bislimi, Kosovo’s coordinator for the EU-facilitated dialogue with Serbia, had been invited to participate in a panel at Belgrade Security Conference. But he had to return to Kosovo when Serbian authorities stopped his delegation on their way to Belgrade.

“Delegation with First Deputy Prime Minister of Kosovo Besnik Bislimi, who would have been the highest official of Kosovo to take part in Belgrade Security Conference, was returned to Kosovo, one hour before arriving in Belgrade. The reason cited was ‘security concerns’,” the BSC said.

“Besnik Bislimi was due to take part in second day of conference Panel titled ‘Kosovo and Serbia – Escaping the Dead-End’.”

However, Bislimi on Thursday night told the media that the reason for his ban likely “lies somewhere else”.

“We had aimed to provide Belgrade, the diplomatic corp and citizens there with Kosovo’s version of developments… You know that citizens in Serbia are exposed to a terrible propaganda by the Serbian government,” Bislimi said.

“We were stopped around 85 kilometres before we reached Belgrade. It is illogical to detect a security threat immediately. This could have happened here at the [Kosovo] border and not all the way [until near Belgrade],” Bislimi went on.

“This is a proof on how Serbia sees the wish or readiness for normalisation of relations with Kosovo,” he added.

Bislimi explained that a police car had joined the convoy and then asked them to stop on the road to Belgrade while authorities communicated to Serbia’s Kosovo Office in Belgrade that the delegation should return home “due to security concerns”.

“We did not have any information at all about security, or any threat. I think all this was fake. The aim was to not allow the participation of a Kosovo Deputy Prime Minister in such a forum in Belgrade because it is the main forum that is held this year there, and I think there was big resistance to presenting the truth for Kosovo in such a forum,” Bislimi said.

Although such visits are regulated through an agreement reached in the European Union-facilitated dialogue in 2014, the issue of visits has often been fraught.

On Wednesday, the head of the Serbian government’s Office for Kosovo, Petar Petkovic, announced that he had to cut short his stay in Kosovo, blaming Pristina authorities for not allowing him to complete his agenda.

Speaking in the eastern Kosovo village of Pasjane/Pasjan, Petkovic said that three other visits to Serb-inhabited areas would not now be done.

“Yesterday [Tuesday], around 16:00 hours, my visit was approved as I requested it. However, somewhere around midnight I received a new email where almost 80 per cent of the program of my visit was banned,” Petkovic said.

The European Union called on both Kosovo and Serbia on Friday to not politicise visits.

“Official visits play an important role in promotion of normalisation of relations and understanding between countries and these visits should not be politicised,” Peter Stano, EU Spokesperson, told Radio Free Europe.