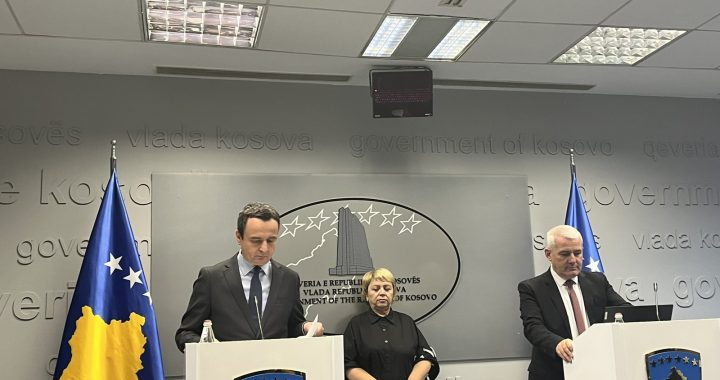 After Western pressure, Prime Minister Albin Kurti announced that his government will postpone the implementation of its decision to make drivers change Serbian vehicle licence plates for Kosovo ones from November 1.

Kosovo Prime Minister Albin Kurti announced on Friday that he will postpone the implementation of his government’s decision to make drivers with vehicle licence plates issued by Serbia change them for Kosovo plates from November 1.

Kurti said at a meeting with his cabinet that there will now be a phased implementation of the change to Kosovo plates which will continue until April 21.

Drivers continuing to use Serbian plates will initially be reprimanded, then fined, then forced to attach probationary plates to their cars, he explained.

“Starting from November 1 until November 21, the measure will be a reprimand. From November 21, for the two next months until January 21, we will go with a measure of fines and from January 21 we will impose probationary plates,” he said.

“After April 21 there will be no probationary plates because there can be no other plates in use within the Republic of Kosovo,” he added.

Although he admitted that he had met Western ambassadors to discuss the situation, Kurti said that the decision to “scale up sanctions” came after internal discussions.

Kosovo Serb leaders have warned that they will blockade roads in the Serb-dominated north of Kosovo if the measure is imposed. Serbs in northern Kosovo set up barricades near the border with Serbia in August when the licence plate change was initially supposed to be imposed.

“We are showing our seriousness by unequivocaly implementing our decision but also we will give a chance to all those who want to integrate. This is a way to implement the law but also to have our answer to the extensive international sensitivity about peace and security,” Kurti said.

He insisted that “[Serbian-issued] licence plates PR, KM, PZ, GL, UR, PE, DA are illegal. The Kosovo government, though its decision, has obliged owners of these plates to turn them into RKS [Republic of Kosovo plates].”

The issue of vehicle licence plates has long been a source of dispute between Serbia and its predominantly Albanian-populated former southern province, which broke away in a war in 1999 and declared independence with the backing of the major Western powers in 2008.

Ever since the war and the withdrawal of Serbian forces, Serbia has continued to operate a parallel state system, issuing documents, licence plates and other papers for Serbs in Kosovo.

In June, the Kurti government made it obligatory for drivers in Kosovo to take RKS plates and launched a publicity campaign mainly in Serbian to explain the procedure and the incentives.

“Legality and security remain our mission so I call on all our [Serb] citizens to use the benefits Kosovo provides and replace their plates with legal ones,” Svecla said.