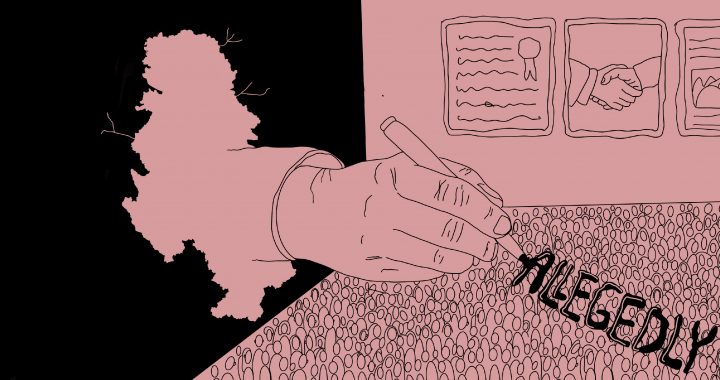 Although a military confrontation seems unlikely, a recent survey in Kosovo showed that most respondents still consider Serbia as the country’s leading danger to national security – and their concerns are far from irrational.

Kosovo citizens continue to consider Serbia the main external threat to the country’s national security, a fact confirmed once again by the latest edition of the Kosovo Centre for Security Studies’ Security Barometer survey.

In an open-ended question, more than 44 percent of respondents singled out Serbia as the main national security threat, followed in second place by other malign foreign influences.

Although qualitative analysis reveals that Serbia is not an imminent security threat to Kosovo militarily, considering the presence of NATO Kosovo Forces (KFOR), the prevailing public concerns towards Serbia are not ungrounded. Many Kosovo citizens still vividly remember the role of Serbia during the 1990s, including both the events leading up to the Kosovo war and the war itself.

However, it is also Serbia’s ongoing behaviour on both the diplomatic and political fronts that continue to create a significant degree of insecurity amongst Kosovars.

Up until this day Serbian authorities continue to deny the internationally proven atrocities committed by its police, military and paramilitary troops in Kosovo during 1998 and 1999.

More than 13,000 civilians were killed during this period and the use of sexual violence as a weapon of war was widespread. Approximately one million refugees fled Kosovo, while around 25,000 private properties and public owned buildings, including schools and places of worship were destroyed.

In a statement on March 24 this year, the Serbian government’s so-called Office for Kosovo and Metohija made reference to “the alleged crimes” in Kosovo, in a statement addressing PM Albin Kurti’s principle that Serbia must accept the truth about the Kosovo war in order for a successful dialogue.

The statement again proves that consecutive Serbian regimes that succeeded Milosevic’s have only continued to display both a lack of regret and self-victimisation in relation to Kosovo, a continuation which also helps stoke insecurity in its former province.

Another cause of concern among the Kosovo public is the continued failings of the EU-facilitated dialogue aimed at normalising relations between the two states.

Kosovo, which shares 44 percent of its land border with Serbia, has been committed to the Brussels dialogue table for the past 10 years, during which time it has been reported that more than 40 joint agreements have been signed. However, many of these agreements only addressed technical issues and have not tackled the core of the problem.

In the meantime, Serbia continues to use all instruments, outside of the use of military force, to the detriment of Kosovo and its citizens.

The most notable of these instruments are Serbia’s vicious diplomatic campaigns encouraging ‘derecognition’ of Kosovo and preventing Kosovo’s membership in key international organisations, its blockade on all goods branded with Republic of Kosovo stamps, and its interference into key internal Kosovo political processes by instrumentalising the Kosovo Serb community.

This behaviour is, in many ways, related to how Serbia projects its influential regional and geostrategic role, which is often perceived as an imposed hegemon with daunting strategic consequences.

Serbia has continually exploited ethnic Serb communities living outside of its borders in order to maintain authority over existing conflicts and tensions. Although Serbia often claims to be a regional leader, its influence has often produced negative consequences not just in Kosovo but across the Western Balkans, particularly in Bosnia & Herzegovina and more recently in Montenegro.

At the same time, Serbia continues to position itself as a central stage between competing Western and Eastern interests, which has enabled global powers such as Russia and China to play an influential role in Western Balkans, not only economically but also politically, mainly by using Serbian elements in the region.

And yet, despite the negative impact that Serbia’s diplomatic positioning has had in regard to ongoing peacebuilding and Euro-Atlantic integration efforts in the region, paradoxically it also seems that it has enabled Serbia to further strengthen its bargaining power in relation to the west.

Furthermore, although Serbia’s domestic politics has declined significantly in regard to respecting democratic principles and freedoms, a fact also highlighted in the latest European Parliament progress report, it remains  ahead of many of its neighbours in the European integration process.

Finally, it is also important not to forget the ongoing regional arms-race in which Serbia is taking centre stage. Militarization has continued apace in Serbia in recent years, with large arms purchases from Russia, including military aircraft, tanks and other means of heavy warfare.

This militarisation will inevitably evoke memories of the wars of the 1990s in which Serbia was the main aggressor, and will be perceived as a direct hypothetical threat in Kosovo.

In other words, although Kosovo may not necessarily be subject to imminent military threat, citizens’ perception regarding the level of insecurity deriving from Serbia is completely understandable.

Kosovo and Serbia are locked into ongoing procrastinated conflict as a result of the refusal of the Serbian leadership to constructively engage in a peacebuilding process, and the possibility of a further deterioration of the security situation will only diminish when Serbia reconciles with the existence of the Kosovo state.

Mentor Vrajolli is the Executive Director of Kosovar Center for Security Studies KCSS, a Prishtina based security issues NGO.