Kosovo was initially hit by the wave of conspiracy theories about vaccines in the Balkans – but now has the highest percentage of vaccinated people in the region.

Conspiracy theories about COVID-19 vaccines, big and small, have spread alongside the virus around the world – and have found fertile ground in the Western Balkans.

When vaccines were first released, many citizens of Kosovo were reported not to want them, fearing allegedly dangerous or fatal side-effects.

But, in over a year, the situation flipped, with more people getting vaccinated every day.

Kosovo now leads in the Western Balkans in terms of vaccination rates, with 53 per cent of the population vaccinated once and with 45 per cent having had a second dose.

Trust in science and institutions, public awareness about the importance of the vaccine, and travel and other restrictions for unvaccinated people may have been some of the reasons for the shift, experts say.

Anduena Berveniku, from Prishtina, said she did not want a vaccine in the beginning, as it came out quickly, and she was influenced by warnings she read on social media.

“In the beginning I was very influenced by what I read on social media, I had dilemmas about the way the vaccine came out so fast and I did not want to take it with the first group of vaccinated citizens,” she told Prishtina Insight.

But Berveniku changed her mind after seeing that family members did not show any serious side-effects, and that she would need it to avoid the growing restrictions.

“After my family members got vaccines, I felt assured that many of the things I read did not stand up, and of course I needed it [a jab] for work, and to avoid a lot of other restrictions,” she said.

Abraham Aldama Navarrete, a public opinion researcher, from the University of Pennsylvania, told Prishtina Insight that many factors dictate why people decide to get vaccines or not.

“A number of things that may determine people’s willingness to get vaccinated, and to believe and share misinformation and conspiracy theories,” he said.

Navarrete, who has conducted research on political psychology in developing countries, said education of the population, the attitude of the media and the strategy of conveying messages from institutions all play a key role.

“These include people’s pre-existing trust in science, what kind of news the media is sharing, and the recent public-health messaging strategy, and the incentives to get vaccinated put in place by both the government and the private sector, among many others,” he said.

While in other European countries, conspiracy theories have affected about a quarter of the population, in the Western Balkans some 75 per cent of interviewed citizens say they have been affected by at least one of the main conspiracy theories, a study from BiEPAG in 2020 showed.

According to this study, support for conspiracy theories is also linked to general sentiment toward the US and China, with minorities being the groups most likely to fall prey to theories.

Kosovo now leads in the percentage of the vaccinated population, even though it was the last country in the region to start mass vaccination. It is also the only country on the Balkans using only Pfzier and AstraZeneca, while other countries in the region also use the Russian and Chinese vaccines. 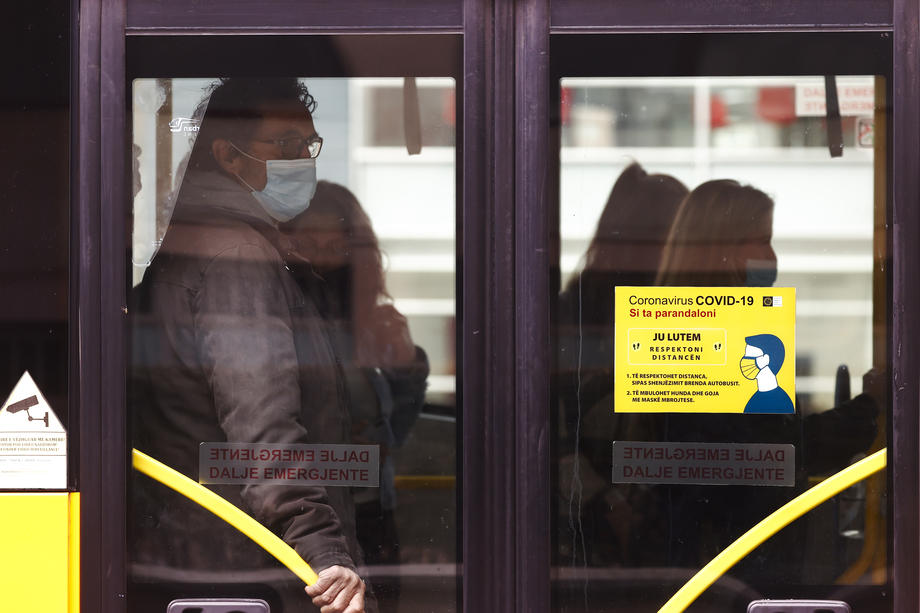 A sign to wear face protective mask and to keep social distance is placed on a bus in Pristina, Kosovo. EPA-EFE/VALDRIN XHEMAJ

Tena Prelec, a research fellow from Oxford University, also one of the authors in the Biepag study, says the high percentage of vaccination in Kosovo reflects the trust that citizens feel in their institutions.

She added that the high level of trust in the EU and in Western democracy also plays a role here. “Kosovo stands out as the country with the highest share of the population thinking that democratic countries handled the COVID-19 crisis the best,” she added.

“Kosovar respondents place the strongest trust in the EU when it comes to actors that are expected to help most in future in terms of overcoming the COVID-19 crisis (56 per cent of the population). Three out of four Kosovo citizens also fully trust EU membership as the best future perspective for their country, which contrasts with Serbia, where only about one in four respondents state the same,” said Prelec.

According to her, Serbs in Kosovo have less trust in the China-related conspiracy theories than the rest of the country owing to Serbia’s close ties to Beijing.

“Ethnic Serb citizens in Kosovo express a lower belief in China-related conspiracy theories than other ethnic groups: this should be seen against the background of the strong pro-Chinese propaganda waged in the Serbian media,” she noted. 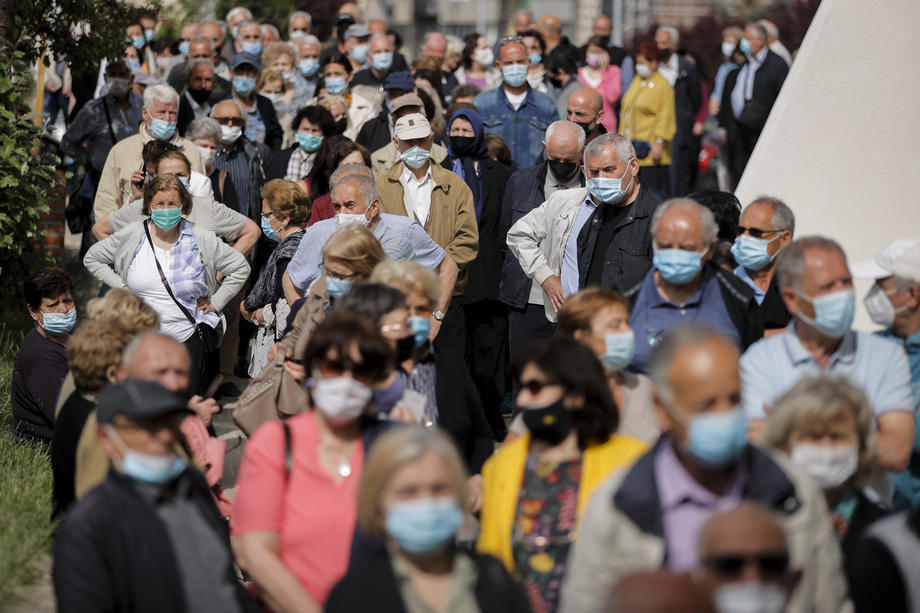 People aged over 65 queue to receive their first dose of Pfizer-BioNTech COVID-19 vaccine at a vaccination center in Pristina, Kosovo, 12 May 2021. EPA-EFE/VALDRIN XHEMAJ

Kosovo was first supplied with a small amount of vaccines in March 2021. During the summer of 2021, few people in Kosovo seemed interested in vaccines, as it was holiday time and the case numbers had decreased.

Reports that the AstraZeneca vaccine caused blood clots made many citizens of Kosovo opposed to this vaccine in the beginning.

But by the end of summer there was an alarming mortality rate, as well as a very high number of infections. This encouraged more people to get vaccinated.

Data from the Ministry of Health suggest that the uptake in jabs was highest among housewives.

Ilmi Kasabaqi, a retired citizen from Prishtina, says that even though he is old and vulnerable, he felt a dilemma about getting a vaccine, after he read about vaccines “killing off” the elderly.

“At first I did not want to get that vaccine, after everything I saw written on social media. I read somewhere that the vaccine accelerates the death of the elderly, so I did not feel comfortable,” he said.

Kasabaqi’s wife changed his mind after she got the vaccine before him, and he saw other older people suffering no bad consequences.

"I changed my mind when I saw that my wife who was vaccinated earlier than me did not have any major side-effects, except some flu symptoms, and I also saw that some neighbors here who are much older than me managed it easily,” he said.