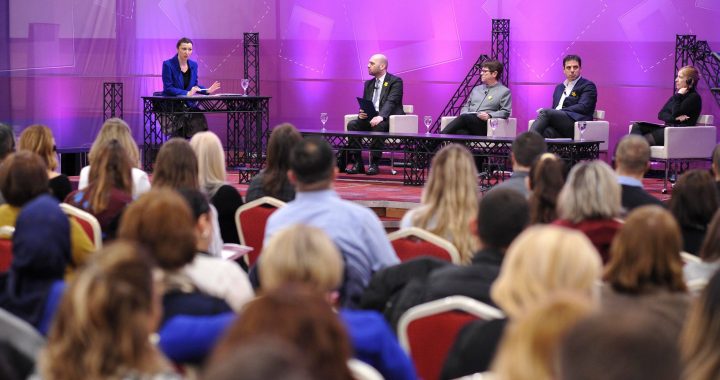 Panelists in the conference organized by the UN and the EU Office in Kosovo in March. Photo: Atdhe Mulla.

A debate on women’s role in decision-making positions

A panel discussion organized marking the 20th anniversary of UN Security Council Resolution 1325 on Women, Peace and Security for Kosovo’s Global Open Day was held in March in Prishtina, discussing the gender-responsive and inclusive political processes in Kosovo.

The debate, which covered a range of local, regional and global issues, invited around 200 participants, including domestic and international experts, civil society leaders and politicians to discuss women’s roles in leadership positions, engaging in debate over legal reform in Kosovo moving towards gender equality.

United Nations Global Open Day, which was organized by the UN and the EU Office in Kosovo, offers a platform where women’s voices can be heard and provides an opportunity to review the implementation of Resolution 1325, which implores countries to include women in all levels of decision making.

According to the panelists, the decision-making initiatives to have the women involved are still insufficient in practice.

Despite pressure to have more women involved in decision-making positions and respect for their rights, civil society activists involved in the debate said that Kosovo institutions are not working hard enough to change this issue.

Igballe Rogova, human rights activist and director of the NGO Kosovo Women’s Network, said that the gender quota required for parliamentary participation has greatly helped the involvement of women in politics.

Rogova has called the negotiating team that was selected in December to represent Kosovo in the Brussels-facilitated dialogue between Kosovo and Serbia “awful,” since it is composed of only  men.

“I am very surprised at our team’s structure. We would have had the same structure in parliament if we had not demanded the gender quota,” said Rogova.

“Institutions are violating the Law on Gender Equality,” she continued. “Don’t you not feel awful, seeing that photo of the negotiating team with all men on it? They even left Dhurata [Hoxha] behind, the only [woman] minister that runs the Ministry of European Integration.”

On the other hand, Ardian Arifaj, political advisor to the Kosovo president, said that we should look beyond the statistics of women’s involvement in our country’s institutions since, according to him, it does not reflect reality.

“We should not be discouraged; we should look beyond statistics. The president of Kosovo has engaged a female adviser but she is not being paid by the state budget, therefore she is not part of the statistics,” said Arifaj.

Arifaj said that implementation of the law and women’s promotion would improve their representation in Kosovo political life.

“We are very happy that we have qualified women in our offices. Women should be more involved in decision-making, electoral reform through the gender quota, implementation of legislation in force, and promotion of women’s role in politics,” he added.

Naim Rashiti, director of the NGO Balkan Policy Research Group, BPRG, said that the gender quota should be increased and extended to institutions other than the Kosovo Assembly.

Rashiti said that they are working to have a gender quota imposed in the government, including women in government ministries and parliamentary commissions.

“I think we have to go outside the campaigns and make concrete decisions about gender representation. The change should begin with the representation of women in institutions,” said Rashiti.

“The quota should also be part of the Law on the Government. There should be a quota assignment for each ministry. The presidency must take various campaign initiatives, and it is obliged to have this fair representation,” he continued. “We are tired of only being able to invite Dhurata [Hoxha] in the conferences because we have her only. Had there been more women, we would have had more opportunities.”

Tatjana Lazarevic, the editor of the Serbian portal KoSSev, shared her experience as a journalist, recounting reports published in Serbian media in the 1990’s and early 2000’s that never involved women.

“Actors, judges, police officers, football players, VIPs, these are people who somehow marked that bitter era. There were only two women in all these shows that I watched, and they were the one filming and interviewing” she recalled from watching a Serbian documentary about the 90s.

“Throughout the wars and economic crises in the Balkans, it would be the woman, it doesn’t matter where in the Balkans she is from, she would be the one that actually kept the family alive, allowing society to continue, and even though we are still in this patriarchal society, somehow men are losing the battle,” she continued.

“Definitely there are not that many female voices now, I am speaking from the perspective of being a Kosovo Serb in Kosovo, but somehow I think that this applies throughout the Balkans.”

During the panel, Linda Shahini, a student from Lipjan, asked Thaci’s political advisor, Arifaj, what steps the president would take in order to improve the implementation of the Law on Gender Equality, as well as about the role that women should play in its realization.

According to Arifaj, the president has no executive power in the implementation of the Law on Gender Equality. He said that the emancipation of women and their involvement cannot be separated from the involvement of men.

Arifaj added that involvement of men and women in decision-making positions would be very difficult if it “becomes a battle between the sexes,” but according to him, it should be something that can be achieved “through partnership between sexes.”

When pushed by the audience members to comment on the fact that women MPs did not protest in having only men for the Kosovo dialogue team, Rogova said “you will not find me talking badly of any woman holding a position in Kosovo,” and that she is proud of women in parliament because of their work and cooperation with civil society.

Rashiti said that women in politics need legal instruments that increase their representation in parliaments and other institutions, and that would block political processes when there is no equal representation.

Jovan Zhivkovic, a representative of the UN New Task Force youth working group, asked panelists why women in minority communities are not involved in decision-making.

Reshat Gashi, a governmental gender equality officer, said the legal infrastructure is good enough, but needs to be implemented and valued. Gashi then questioned the other panelists as to whether their family property was registered under a woman’s name.

Dafina Krasniqi, a student, asked Arifaj why the president’s office did not employ a woman as an advisor, and whether they doubt a woman’s ability for this position.

According to Arifaj, the entire family property is registered in his wife’s name, while for the presence of women in the president’s office, he said that it is “adequate” but “not satisfactory.”

Rashiti said that he is the owner of his property, and it does not matter whether that property is registered jointly under his and his wife’s name because “the majority of people today live on rent.”

The law on registering property under the name of both partners, women and men is supposed to tackle the traditional injustice suffered by women in Kosovo where 83% of all registered property is inherited and registered in the name of men. The new laws with tax breaks for women to get their name to property were suppose to encourage more men to share the joint ownership with their partners, be those wives or sisters.

The conference will be aired on BIRN’s televised program, Jeta ne Kosove, on April 4 at 20:15.