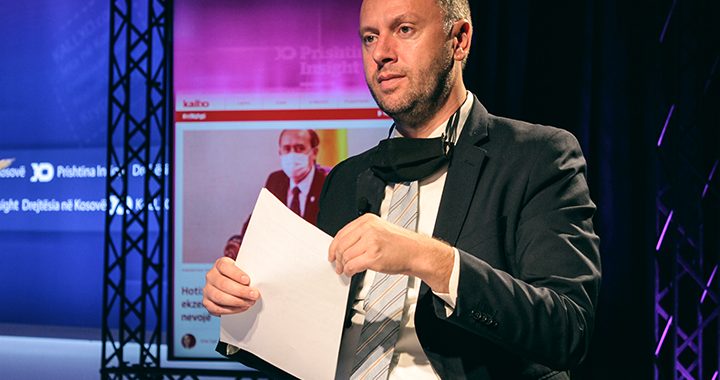 In an interview for BIRN, infrastructure minister Arban Abrashi hailed the Washington ‘economic normalisation agreements’ future impact on the Kosovo economy, while defending against criticism over points relating to Lake Ujman and the so-called ‘mini-Schengen zone.’

In an interview for BIRN’s televised show, Jeta ne Kosove, Minister of Infrastructure Arban Abrashi has described the agreements reached by Kosovo and Serbia on ‘economic normalisation’ in Washington DC, as the first step towards Serbia recognising Kosovo.

Abrashi, who was a member of the Kosovo delegation in Washington, also praised the role played by the Trump administration, and its new focus on economic issues while putting politics to one side.

“America understood that the Balkans needs peace, that we need a better economy and that people should work and not deal too much with politics,” he said.

However, Abrashi added that the Kosovo Government remains committed to receiving recognition of Kosovo’s independence by Serbia, and that the delegation tried to achieve this in Washington.

“We were focused on recognition and we believe that recognition will come soon,” Abrashi said. “We are in coordination – it’s not like we are working on our own for it to happen.”

The agreements signed in Washington contain pledges to implement large infrastructure projects, including road and rail connections between Prishtina and Belgrade, as well as promises that the US International Development Finance Corporation and EXIM would provide financing to support loans for small and medium-sized enterprises.

Abrashi insisted that these aspects of the deal will have a huge impact on Kosovo’s economy. “I’m really happy with these pledges because if they are implemented, it would change the whole way of how business is done in Kosovo,” he said.

The minister also defended two more controversial points of the agreement relating to Lake Ujman and the so-called “mini-Schengen zone,” both of which he insisted were US-led demands.

Point 7 of the Washington agreements states that Kosovo and Serbia have agreed to work with the US Department of Energy on a feasibility study over shared ownership of Lake Ujman, an artificial lake in the north of Kosovo which extends into Serbia.

On Thursday, Albin Kurti, leader of opposition party Vetevendosje, stated that the lake belongs to the Republic Kosovo in its entirety, arguing that it was constructed on the territory of Kosovo, even if parts of the lake extended into Serbia.

Abrashi revealed to BIRN that discussions over the lake were put on the agenda by the US, but insisted that there is no “tragedy” in simply conducting a feasibility study. “If we trust the White House, we are fine,” he said.

The minister labelled criticism over the issue as being motivated by domestic political battles, comparing it to previous disputes over the demarcation of the border with Montenegro, which caused a lengthy impasse at the Kosovo Assembly.

Abrashi also addressed allegations of hypocrisy from the government over the inclusion of an agreement to join the so-called “mini-Schengen zone.” Prime Minister Hoti previously described the initiative as “very harmful and uninteresting” to Kosovo when it was unveiled last year.

Again Abrashi insisted that this point was mainly pushed by the US, adding that President Donald Trump’s personal guarantees sparked a change in policy.

“It was a demand of President Trump,” Abrashi revealed. “He said: ‘you should do this cooperation, I’m begging you to do this. It’s my personal demand and I want this point to be here.’”

Abrashi added that Trump guaranteed that all members would be equal in the mini-Schengen initiative. “Now it is not a customs union, now we are equal shareholders,” he said.