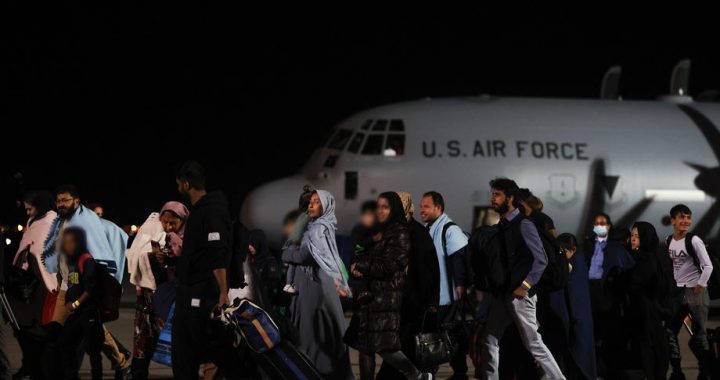 Some 111 Afghan evacuees, who have left their country following the Taliban takeover, arrive at the Pristina International Airport airport in Pristina, Kosovo, 29 August 2021. EPA-EFE/VALDRIN XHEMAJ

Afghans taking refuge in Kosovo who do not pass the required security checks will not be allowed to travel to the US, an embassy spokesperson told BIRN on Friday.

Axios media on May 16 reported that some of the Afghans currently sheltering in Kosovo will not be allowed to enter the United States.

According to the report, this may affect up to 16 refugees staying at the Bondsteel camp in Kosovo.

A spokesperson of the US embassy told BIRN that they are aware of the report, but cannot comment on specific cases for security reasons.

The spokesperson said a coordinated US government team is working to check the Afghans still in Camp Bondsteel,

“For Afghans still temporarily hosted at Camp Liya on Bondsteel, a coordinated interagency US government team is working intensively to vet and screen these Afghans, in order to determine their eligibility for travel to the United States,” the spokesperson said.

“Afghans unable to pass the required comprehensive security checks will not be allowed to travel onward to the United States. In these cases, the United States will work with those individuals to find alternative, durable solutions based on their preferences, family, employment, and other ties,” it was stated.

This process, according to the embassy spokesperson, would involve coordination within international partners to find countries where these Afghans will be resettled.

“This includes coordinating with international partners and allies to identify countries willing to resettle these Afghans, or, when an Afghan wishes to voluntarily return to Afghanistan, attempting to assist them with these arrangements.

“However, the United States will not facilitate the repatriation of any Afghan to Afghanistan unless they wish to return,” the spokesperson of the embassy said.

The spokesperson assured that the Afghans in Bondsteel do not pose any danger to the people of Kosovo and that the embassy will continue to inform the Kosovo government about the status of Afghans who are subject to comprehensive controls.

“The United States will continue to closely coordinate with and notify the Government of Kosovo regarding the status of Afghans undergoing comprehensive security checks and medical requirements at Camp Liya. Together with our Government of Kosovo partners, we will continue to take all necessary steps to ensure the safety and security of both the Afghans hosted at Camp Liya on Bondsteel and their hosts, the people of Kosovo.”

So far, about 600 Afghans have left Kosovo and been relocated to the United States.

A US Government official with knowledge of the situation told BIRN that some 75 Afghans remain in the Bondsteel Camp.

“Most of them are spouses or children of individuals who undergo additional verification and security control,” said the official.

Hundreds of Afghans took refuge in Kosovo after August 2021, when Taliban militants took power in Kabul.

Kosovo is hosting them temporarily until they pass the verification process for repatriation to third countries.

The Afghans in Kosovo are reported to have been mainly US and NATO collaborators during their presence in Afghanistan from 2001 to 2021.