In a bid to end ‘the longest Balkan war,’ Albanian and Greek officials are discussing maritime borders, migrant and minority rights, but will the dialogue leave out the Cham plight?

Every year on June 27, 76 year-old Hajredin Mehmeti makes an emotional journey from Tirana to southern Albania.

The final stop for the former teacher is Kllogjer, a field just 15 kilometers from the Greek border. For the past seven years, Mehmeti has visited the field, often wondering about the whereabouts of his late aunt Zeqirje Sejko, one of the thousands of Chams who died here after fleeing northern Greece after the Second World War.

Mehmeti was only two years old when his family was expelled from their hometown Filat (Filiates in Greek) in July 1944.

He was among the approximately 30,000 ethnic Albanians expelled from northern Greece after being accused of collaborating with the Nazis.

Terrified and weary, the Chams fled northwards to Albania and stayed for months without shelter in Kllogjer,  waiting for the recently liberated post war Albania to take care of them.

Many of them – 2,900 according to the Chameria Patriotic Association – died here and were buried in mass graves, which to this day are visited by descendants. 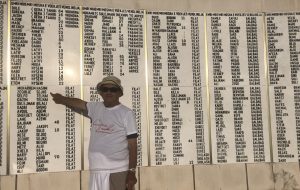 Hajredin Mehmeti pointing the name of his aunt on the memorial. | Photo: Fatjona Mejdini.

Since 1994, when the Albanian Parliament decreed  June 27 as the anniversary of “the Cham genocide,” which the Greek state denies, Albanians gather at the field to commemorate those who lost their lives in 1944.

Over 70 years later, the issue remains a sore point for the two countries which are trying to bury the hatchet.

This year the commemoration had additional significance.

Last November, Albania and Greece pledged to resolve all outstanding issues, some as old as 80 years.  Technically, the countries are still in ‘a state of war,’  since Greece declared war against Albania in 1940.

But ever since Greece signed a historic deal with Macedonia in June over the latter’s name, the possibility for resolving all pending issues with its Albanian neighbor is gaining momentum.

Yet, many in Albania consider that a lasting peace with Greece cannot be guaranteed without solving the issue of the Chams, who to this day seek apology and reparation.

The plight of the Chams is only one of the issues hanging over the heads of Albanian foreign minister, Ditmir Bushati, and his Greek counterpart Nikos Kotzias.

The pair need to tackle issues concerning Albanian migrants in Greece and the Greek minority in Albania. Around 700,000 Albanians live in Greece and around 50,000 Greeks live in Albania today.

Most importantly, the two countries have to strike a deal over the maritime border in the Ionian sea, a controversial issue in both countries.

In the past nine months, the ministers have met six times in Greece, Albania and Brussels. On July 10 during the Western Balkans summit in London, Albanian PM Edi Rama and his Greek counterpart, Alexis Tsipras, met as well to talk about  negotiations.

The EU is also interested in the discussions, pushing for the candidate country to solve its historical disputes before joining the union. 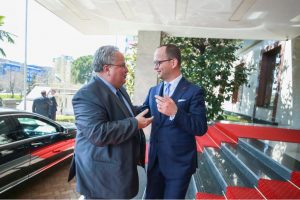 So far,  the issues concerning Albanian immigrants have turned out to be the easiest to resolve. In February, Greece agreed to remove extra procedures and stamps  required for the recognition of immigrants’ documents released by the Albanian administration.

In May, the two foreign ministers signed an agreement that opened the way for the recognition of driving licenses between the two counties.

Sources from the Albanian MFA told BIRN that now is the time for more difficult issues to be addressed, with the maritime agreement next on the agenda.

Although the two delegations are negotiating intensively and deals could be brokered sooner,  Albanian diplomats are keen to finish up negotiations with their neighbor by the end of summer 2019.

For the past decade, Albania and Greece have tried to set a permanent maritime border in the Ionian sea. The first talks began in 2008 and by April 2009, the former Albanian Foreign Minister, Lulzim Basha, and his Greek counterpart at the time, Dora Bakoyannis, signed an agreement demarcating the maritime border and delineating the continental shelf between the two countries.

A year later the Albanian Constitutional Court nullified the agreement

due to “procedural and substantive violations” of the country’s constitution, as well as the UN Convention on the Law of the Sea.

According to the decision, members of the court found the deal unfavorable for Albania and argued that Greece was unfairly granted maritime territory.

Fears over another unfavorable deal persist, although Foreign Minister Bushati has reassured critics that the new deal is going to be “a fair one.”

However, Shaban Murati, a career diplomat and author of the book The inexistent sea issue: A Greek or Albanian diplomatic intrigue? told BIRN that he fears the new agreement will be identical to the one the court nullified. 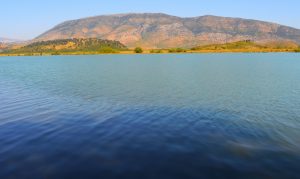 Echoing the constitutional court decision, Murati argued that Albania does not need a new deal on maritime borders but should discuss with Greece the commercial use of the sea instead.

“Issues that we can discuss with Greece are the issue of the continental shelf and exclusive economic zones…. But the government has also included the boundary delimitation in the negotiations. These are three separate issues,” he said.

Things are heating up due to the economic potential that the sea area represents,  both countries have undertaken expeditions in search of oil reserves in this part of Ionian sea in the past few years .

Murati also voiced concerns shared by many other Albanians, including the government’s opposition: the lack of transparency in which the foreign minister and his staff are conducting these negotiations.

“There is a total lack of transparency over deals that Albania and Greece are striking and this makes me very skeptical over the results,” he said.

The representatives of Albanian opposition have also expressed their concerns over what they called the non-transparent manner with which the MFA is handling discussions with Greek counterparts.

Afrim Krasniqi, director of the Albanian Institute for Political Studies, is also critical of the lack of communication from the Albanian government.

“In Albania there is a negotiation group that never speaks and the minister doesn’t inform the public or the Parliament over what is being discussed, treating these negotiations as secretive,” he said.

BIRN asked the Foreign Ministry for comments over the issues that they are discussing with Greece on July 2, but did not received a reply.

Two NATO countries in a state of war

The negotiations between the two countries have troubled the opposition in Greece as well. In an interview for Euroactiv in June, the Greek head of diplomacy Kotzias expressed frustration over what he called “100 year-old problems” that he had to resolve with Albania, including the fact that ‘de jure’ the two countries are in a state of war.

“I think we will solve the pending issues, on condition that the opposition parties in the two states do not start reacting hysterically,” he said.

Albanian opposition leader, Lulzim Basha, has often accused the Albanian government of lacking transparency over the deals with Greece, expressing concern that the deal might violate the Constitutional Court decision.

Other opposition representatives have also spoken of the government “selling the sea” to Greece. 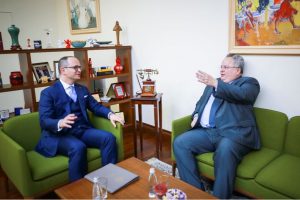 But in a press conference with commissioner Hahn, Rama said that those who speak of “government treachery” over the deal with are going to be ashamed of themselves when the solution will be announced.

Although Greece and Albania signed a friendship treaty in 1996, the war decree has also been an impediment to the Albanians who once lived in Greece to seek their property rights in that country.

The conflict between the two countries, began in 1940 when the Italian forces, based in Albania after Mussolini invaded Albania in 1939, attacked Greece. For months, Greeks and Italians fought on Albanian soil.

As a result, the reigning Greek king at that time, George II, issued a royal decree and declared war against Albania that resulted in the seizure of Albanian-owned property in Greece. Politicians in both countries have agreed that the decision is absurd, but yet it somehow is still in force.

As result of negotiations on December 2017, the Albanian government agreed to build new cemeteries for Greek soldiers who died fighting Italians in the 1940s- a long time request of Greece.

But even though the two ministers have expressed the firm will to end this bizarre state of war, according to Murati, there is no clear path as to how this will be achieved.

“With this issue, it seems that Greece is feeding us with an empty spoon,” he said.

One of the hottest topics that is expected to be eventually discussed between two countries is the Cham issue,  which has long been a serious bone of contention. The Greek Ministry of Foreign Affairs has denied that the issue is on the agenda, however.

According to the Chameria Patriotic Association, currently about 300,000 Albanians of Cham origin live in Albania. Since 2009, they have representation in the Albanian Parliament through the Party for Justice, Integration and Unity, PDIU.

Led by Shpetim Idrizi, PDIU won five seats in parliament in the 2013 elections and joined the governing coalition led by Edi Rama from the Socialist Party, PS.

But in the 2017 national elections, Idrizi was not elected MP, and an internal rift within PDIU resulted in the party having only a single member in Parliament.

Despite of their political representation, Shpetim Idrizi told BIRN that they are not going to allow the issue of Chameria to be forgotten in the current negotiations between Albania and Greece. 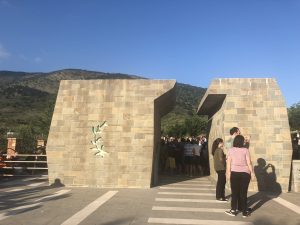 Part of the Kllogjer memorial, commemorating the victims of the Cham expulsion. | Photo: Fatjona Mejdini.

He considers it a state duty at a time when, since 2013, there has been an enforced resolution that requires Albania to put the issue into its diplomatic agenda and try to find a solution with Greece.

“The Albanian government has the duty to negotiate and find a solution, because first and foremost, this is an issue of human rights,” he said.

Today, Chams request a solution for the properties that they left behind in Chameria, as well the right of Greek citizenship that they were stripped of in the 1950s by the communist regime in Albania.

On top of that, they demand a pardon for the genocide and ethnic cleansing committed against the population in the summer of 1944 by the forces of Napoleon Zervas, the founder and the leader of the Greek resistance movement called the National Republican Greek League, EDES, in the name of anti-fascism.

The issue took a twist in June when the Greek FM told Euroactiv that Chameria was not a part of discussions between two countries.

“I am very sad with what the Greek opposition says. They say we’re talking about Tsamouria (Chameria). We are not discussing this at all. There has never been a question of ‘Tsamouria’ in this debate,” said Kotzias.

These statements generated backlash in Albania: PDIU’s Idrizi called on Albanians to boycott Greek products, saying that they are prepared to protest if the Albanian MFA confirms that the issue will not be part of discussions.

Despite the constant attention paid to this issue, minister Bushati has not yet given a public statement to clarify the situation. At the time of publication of this article, BIRN is yet to receive an answer from the MFA.

Back in Kllogjer, Mehmeti said he is tired of the politics and hostility that the two countries have developed over last 100 years. All that matters to him and his family, he explained, is the apology and acknowledgement of the innocent lives that were lost because of these political accusations.

by Balkan Insight
Next: Opinion