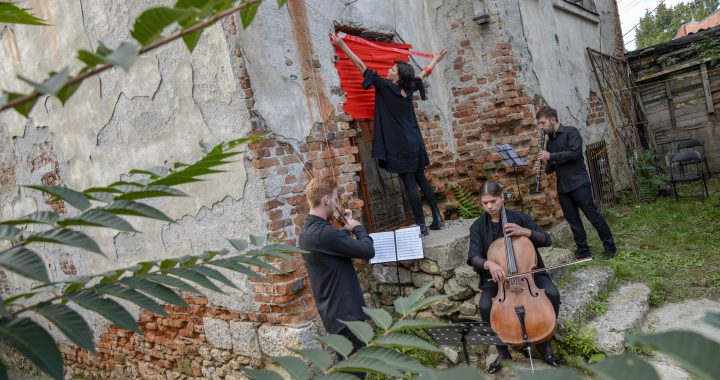 The Shtatembedhjete foundation resumed its public events on Wednesday with the third edition of its annual project ‘Metamorphosis.’

No more than 30 persons were able to see artist Nurhan Qehaja’s site-specific take on the project, which aims to raise awareness about the use of public spaces. This year’s intervention took place at the former Red Cross building on Xhemajl Prishtina street, and was titled ‘but first, check the water.’

Qehaja told Prishtina Insight that “the concept explores the ambiguities of cultural heritage protection.” She added that the title is a reference “to the fact that many buildings have been ruined because the water was purposefully left on.”

Nestled into the courtyard of the former Red Cross building, which has recently been added as a protected monument to Kosovo’s Cultural Heritage List for Temporary Protection, visitors witnessed the artist using red tape to conceal one of the building’s dilapidated entrances.

Qehaja’s performance was accompanied by the musicians Kaltrina Berisha, Rron Bakalli, and Yll Zhavelli playing a classical piece by composer Liburn Jupolli that heightened a feeling of remorse “that this building was once someone’s home and someone’s safe space,” as the event’s description put it.

Just two weeks prior to the intervention, the Kosovo Institute for the Protection of Monuments denied access to the building, forcing the entire team to readjust their plans.

After having to adapt her concept at the last minute due to the decision, Qehaja told Prishtina Insight that she used red tape as a symbol of protest, as well as “disappointment at how buildings that are meant to be protected are left to rot, basically denying us the right to collective memory.”

By December this year, Sihana Klisurica, Shtatembedhjete’s communication officer noted that there will be a publication of the extensive research conducted for ‘Metamorphosis III’ available in print.