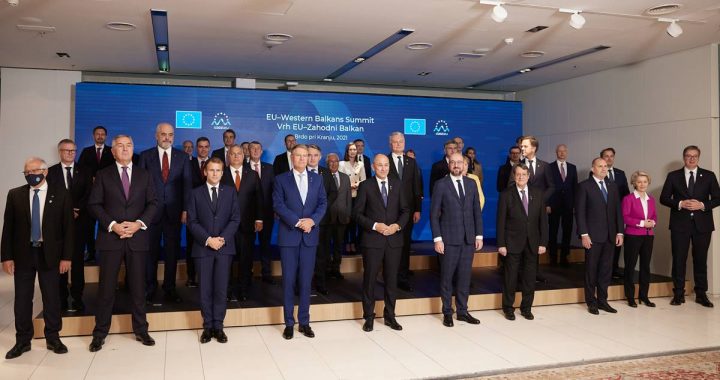 Six days after the license plate agreement between Kosovo and Serbia, Kosovo’s Albin Kurti and Serbia’s Aleksandar Vucic met up at the summit in Slovenia.

Following the September 30 agreement on defusing the license plates row, Kurti and Vucic met at the summit and talked about the Berlin Process, free movement and mutual recognition of diplomas, according to Kurti.

“We support agreements in which all WB6 countries are treated as equals and citizens are the end-beneficiaries,” wrote Kurti on Twitter after meeting Vucic, not mentioning his name, referring only to the Serbian President.

After more than ten days of blockades and protests in Serb-majority northern Kosovo about Kosovo’s new rules on car vehicle license plates, a provisional agreement was reached in Brussels.

Since then, Kosovo Serbs have lifted road blockades, Kosovo withdrew special police from the Jarinje and Brnjak crossings, and, as per the agreement, sticky notes are being temporarily placed on car license plates from both sides.

After the meeting, unlike Kurti, Vucic gave no details at the press conference, only repeating the message about Serbia’s readiness for membership of the European Union, and saying that without a solution to Kosovo there is no EU for Serbia.

EU leaders, meanwhile, hailed the Kosovo-Serbia agreement on license plates as a step forward, saying it an “excellent message”.

“The agreement facilitated by the EU was an excellent message for the region as well,” the German President of the European Commission, Ursula Von der Leyen, declared.

Von der Leyen said the agreement was a big step for both Kosovo and Serbia as it meant they can now sit at the same negotiating table, and find solutions even to difficult situations.

The High Representative of the European Union for Foreign Affairs, Josep Borrell, expressed pleasure also that Kosovo and Serbia have “overcome the crisis over the license plates of cars” and urged the parties to continue their EU-facilitated dialogue.

At the start of the summit, Kurti condemned what he called the great injustice of the EU’s failure to deliver on visa liberalization for Kosovo.

Discussion of free movement for Kosovo citizens in the EU’s passport-free Schengen started back in 2010, but has yet to reach fruition.

Kurti told the media that more than three years have passed since the European Commission for a second time recommended visa liberalization for Kosovo.

“We hope that at this summit, the European Union will stay true to its essence, enlargement. As the most important political project for peace and prosperity since the Second World War, the EU must expand to be Europe,” Kurti said.

Despite the Commission and the Parliament of the European Union greenlighting visa liberalization for Kosovo, the EU Council of Ministers has not yet done so because some EU member states insist that Kosovo has still not met the criteria for the fight against corruption and high-level organized crime.

Despite this, Von der Leyen said it was important for the EU to make it clear to the Western Balkans that their future is in the EU and that the European bloc is their preferred partner.

She said that over the years it has been seen how much the countries that have already become part of the European Union have benefited, and she wanted the same for the Western Balkans.

The Commissioner for Neighbourhood and Enlargement, Oliver Varhelyi, spelled out more precisely that the European Union should approve visa liberalization for Kosovo and move forward on opening stalled accession talks with North Macedonia and Albania.

“We must hold the First Intergovernmental Conference with Northern Macedonia and Albania, open chapters with Serbia, speed up the process of declaring Bosnia and Herzegovina a candidate country, and approve visa liberalization for Kosovo,” he said.

The EU committed nearly 30 billion euros to the Western Balkans to aid development and propel its countries towards membership over the next seven years.

The package will be used for investments in digital networks, energy, roads and other sectors in the Western Balkans.

“We want the Western Balkans in the EU,” Von der Leyen told the media. “There cannot be any doubt.”

Slovenia, current holder of the rotating EU presidency, last month urged the EU to admit all six WB countries by a deadline of 2030.

However, expanding the EU remains a contentious issue across much of the 27-nation bloc and few expect such a massive shift within less than a decade.