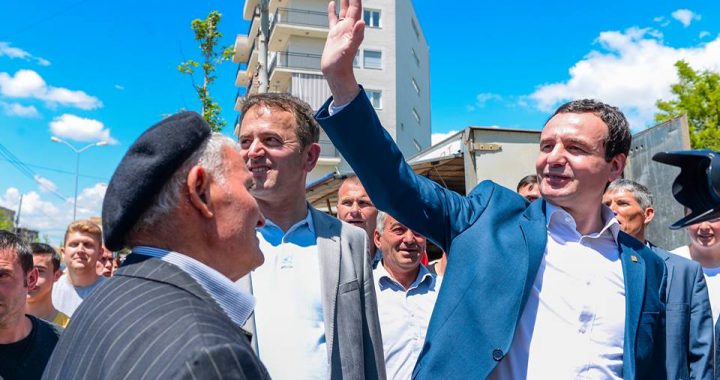 Some Basic Facts About Vetevendosje

Dear internationals, spare us the pearl clutching over Vetevendosje’s protest tactics and instead read some basic facts about their political platform.

After their surge in parliamentary elections, members of the international community have expressed their concerns about the ‘danger’ of increased political power in the hands of Vetevendosje. Many Kosovars hold opposing views on the merits of Vetevendosje – there are certainly Vetevendosje positions I vehemently disagree with and past transgressions of theirs I won’t forget. But that debate should be exclusively reserved for Kosovars. As Mikra Krasniqi pointed out in his last column, the actual needs and demands of the Kosovar voter have been considered secondary to the agendas of embassies and international missions for far too long. Those agendas are built on premises that are faulty at best, and hypocritical at worst. The knee-jerk dislike for Vetevendosje is one of those premises. Critics of Vetevendosje tend to focus on their most explosive protests and tear gas attacks in parliament, ignoring their policy positions and the ways in which Kosovo’s ‘autocratic’ political establishment informs their actions.

Let’s start with Vetevendosje vis-a-vis the Kosovo-Serbia dialogue: A Vetevendosje-led dialogue process would change course altogether and focus its energies on negotiations with the Serb minority in Kosovo. A move like this would disappoint the EU, which has facilitated the dialogue since 2011. But the dialogue, in its current form, has been a farce. Kosovo’s negotiating team didn’t even attempt to reach a consensus in parliament or among voters regarding what Kosovars stood to gain from the dialogue process, what Kosovo’s negotiating points would be and whether any conditions or red lines would be built into the structure of the negotiations. Reporting in parliament has been nearly non-existent and Kosovo’s public still has no clue whether their licence plates or diplomas are valid across the border (they are not, despite the opposite being agreed upon in Brussels).

And that doesn’t even get to the heart of the issue at hand: Serbia is an aggressor that still maintains territorial claims on Kosovo, and we’re sending government officials to Brussels to debate telecommunications policy? Before any bilateral talks, Kosovo needs Serbia to provide war reparations, to relinquish its claims on Kosovo and to recognize its statehood. This may not be in the EU’s interest, but it is without question in Kosovo’s interest.

Vetevendosje and nationalism: Vetevendosje has vehemently protested against the Serbian government, the Kosovo-Serbia dialogue, the Association of Serb-majority Municipalities, Serbian imports, and war crimes-denier and former minister Aleksandar Jablanovic. What they have never done, however, is protest against Serbs themselves. No calls for their expulsion. No incitement to violence. No policies of segregation. No use of ethnic slurs. Yes, Vetevendosje has stated that one of their goals is unification with Albania. This does not a priori relegate them to the status of dangerous ultranationalists. In Northern Ireland, Sinn Fein (a party affiliated with the Irish Republican Army, a much more radical entity than Vetevendosje has ever been) aspires to similar aims, without being considered an existential threat to other ethnic groups living there.

By comparison, it’s important to note that the governments of Kosovo and Albania have held bilateral meetings every year since 2014 to deepen economic and cultural ties, under the banner of “One Land, One Nation, One Dream.” None of the expats I’ve heard bemoaning the dangers of Vetevendosje are probably even aware of the Strategic Partnership Document signed by Kosovo’s PDK-led government with Albania three years ago.

Vetevendosje and violence: Protesters at Vetevendosje demonstrations have thrown rocks and sometimes, molotov cocktails. Protest marshals are always present at Vetevendosje demonstrations. It’s their job to prevent violence and confrontations with the police – sometimes, in crowds of thousands, those attempts fail. The vast majority of Vetevendosje protests I’ve attended have been uneventful, with crowds peacefully dispersing in the span of an hour and after a few speeches. Vetevendosje MPs have indeed thrown tear gas in parliament, with the support and participation of AAK and NISMA, parties now aligned with the PDK. The tear gas attacks were in response to the establishment of the Association of Serb-majority Municipalities, an independent, self governing entity within Kosovo that can legally receive direct funding from the Serbian government. The tear gas attacks were also in response to a demarcation agreement with Montenegro, which foresees ceding 8,000 hectares of Kosovo’s territory to Montenegro. The demarcation issue was imposed upon Kosovo by the EU as a surprise condition for visa liberalisation. The opposition’s legitimate concerns regarding both of these issues were never fully addressed, nor was the opposition invited to work with the government in order to reach a compromise on them.

On the other side of the political spectrum, violence has also been employed. According to a GlobalPost investigation, PDK-affiliated members of the Kosovo Liberation Army allegedly participated in political killings – under the watch of the international community. The same report mentions SHIK, the illegal intelligence services of the PDK, in relation to those killings and other post-war crimes. Those murders have never been solved. Just this year, President Thaci ‘reassured’ the family of one such victim that he had nothing to do with those murders. Thaci was the leader of the PDK until February 2016. Kadri Veseli is the current speaker in parliament and also the former head of SHIK, the PDK’s aforementioned shadowy intelligence service of on-call thugs. In 2014, PDK MP candidate Elvis Pista was killed under mysterious circumstances, shot in the back by an unknown assailant on a Sunday morning. PDK mayor Sami Lushtaku orchestrated a lynching campaign against BIRN Kosovo Director Jeta Xharra.

All this is to say: there is no comparison or equivalency to be made here. Kosovo’s political establishment holds the power of the entire state apparatus, as well as a coterie of their own personal thugs. Vetevendosje, by comparison, has tear gas canisters and protests – and perhaps former KLA strongman Rexhep Selimi. The contrast is striking, especially considering the recent death of Vetevendosje activist Astrit Dehari in his prison cell. His body was found with a plastic container shoved down his throat, after he spent 70 days in detention without a single charge laid against him. It’s baffling that the international community does not condemn the violence of other political forces with the same rigour it reserves for Vetevendosje.

Vetevendosje and the ability to govern: before relegating Vetevendosje to the role of reactive malcontents please pay attention to the municipality of Prishtina, Kosovo’s most populous and wealthiest municipality. Prishtina has been governed by a Vetevendosje mayor, Shpend Ahmeti, and his cherry-picked cabinet since 2014. Here’s a brief laundry list of how the city has changed since then: low cost district heating has been reactivated, illegal construction has been halted, public transportation projects have been implemented, new libraries and public clinics have been opened, and a city-sponsored program provides kifle and milk to elementary school children. No corruption scandals.

Prior to Vetevendosje’s administration, LDK leader and current Prime Minister Isa Mustafa served as Prishtina’s mayor. Accusations of graft, corruption, misuse of public funds, half-baked projects and business interests ran amok in Prishtina’s city hall for five long years. At the national level, Kosovo’s political establishment hasn’t even been able to secure electricity and running water for Kosovars over the past eighteen years – not even after over 500 million euros in direct aid. Where did all that money go? Let me be blunt: it was stolen. That money, intended for Kosovo’s development and provided by the taxpayers of western democracies, was stolen by members of the international community and Kosovo’s political establishment – the same people ostensibly to be trusted with the money of Kosovo taxpayers today.

Here’s the thing that kills me – Kosovo’s embassies and international missions know all of the above. They know about the political killings, thuggery, nepotism, corruption and outright theft by Kosovo’s political establishment. They watched the devastation of Kosovo play out for years, not lifting a finger in defense of the poor and the powerless, before or after independence. All of it was tolerable, as long as Thaci, Mustafa and others spoke in mealy mouthed terms about reconciliation, stability and integration – the key points of the western agenda in Kosovo. And yet, Vetevendosje is expected to uphold the letter and the spirit of the law, to never engage in confrontation with the system of thuggery that defines Kosovo’s democratic process. Yes, tear gas in parliament does not make for a nice picture internationally. Kosovo voters, unfortunately, do not have an ideologically pure, ‘respectable’ choice that would satisfy the international community. We only have the existing political parties in Kosovo to choose from. And for many, Vetevendosje seems like a helluva good choice.

Hana Marku is a writer and researcher based in Toronto, Canada. She is a regular columnist for Prishtina Insight.

Correction June 20, 2017: An earlier version of this article claimed that Hashim Thaci was PDK head until February 2017. Thaci relinquished his post in February 2016.

Disclaimer: The phrase “International community” is in reference to, but not limited to, attitudes held by foreign journalists, observers, former and current development professionals, members of international organizations, and other entities and is not a reference to explicit, codified international policy in Kosovo.