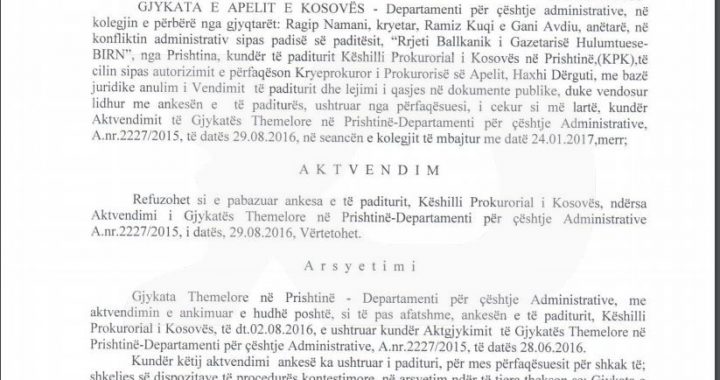 Kosovo’s Court of Appeals issued a final verdict in favor of BIRN’s requests to make final decisions on disciplinary cases against prosecutors available to the public.

A final verdict issued by the Appeals Court has decided in favor of BIRN’s requests for access to Kosovo Prosecutorial Council, KPC, disciplinary case files. For years, the Balkan Investigative Reporting Network, BIRN, Kosovo has requested access to files on disciplinary measures taken against Kosovo prosecutors, in accordance with Kosovo’s Law on Access to Public Documents.

After a series of refusals, the organization took KPC to court in 2012. In June 2016, the Basic Court in Prishtina decided in BIRN’s favor, stating that KPC’s actions violated the Kosovo Constitution and laws.

KPC initially appealed the verdict belatedly, and on January 24, 2017, their second complaint contesting procedural provisions was declared unfounded by the Appeals Court. The decision affirms the verdict in BIRN’s favor and makes the decision final.

After this verdict, KPC cannot hide the final decisions of the disciplinary cases against prosecutors from the public.

“The requested information, according to the Court’s judgement, cannot be considered private, because actions of individuals in official duty, as prosecutors, are official actions of civil servants, who fulfil a public office,” the Basic Court’s decision stated.

The court also affirmed that access to such information does not constitute a violation of the prosecutors’ privacy.

“Public prosecutors in Kosovo are known by name and last name and the moment they were appointed was a public affair,” the verdict stated. “Publishing their names and the disciplinary measures taken against them would not violate their personal data.”

“The documents sought by the plaintiff (BIRN), specifically the final decisions that have to do with the disciplinary measures against prosecutors, are not part of the kind of documents that are excluded for access according to the Law on Access to Public Documents. The right to access public documents is an elementary right in a free and democratic society and is an indicator of the level of transparency and accountability of public authorities towards citizens, civil society, media, et cetera,” the verdict stated.

This is the second verdict in favor of BIRN, after a lawsuit brought against the Prime Minister’s office for not complying with the law on access to documents. The court decided in BIRN’s favor and ordered access to all public documents, bills of the expenditures of the prime minister, ministers, and other state officials to be provided. The PM’s office continues to hinder access to documents.