The calm before the storm: Prizren gets ready for Dokufest

Dokufest kicks off its 16th edition tonight; our correspondent visits Prizren to witness preparations for a whirlwind week of movies, lectures, and parties.

I entered Prizren’s Shadervan Square via the old stone bridge and was greeted by a cloud of smoke floating over the fountain, smelling of burnt meat. I stopped for a sip of water, as I always do, and was flooded by memories of the town I had missed so much.

It was a week before the start of Dokufest, the documentary and short film festival that needs no introduction on its sixteenth anniversary. The festival has grown into a giant that now, in addition to films, features panels, lectures, discussions, photography, workshops for kids, tech events, and a vibrant music scene, all accompanied by (arguably) the year’s best parties and nightlife in Kosovo.

For the next ten days, Prizren is expected to host an estimate of 45,000 visitors, the majority of which will attend the festival. A week before the festival Shadervan square seemed to have reached its full capacity. By 10:00 pm all of the best seats at Kafja Jeme — the ones along the promenade where the summer breeze refreshes your hot face and from where you can observe other people walk by — were occupied. I would have settled for inside, a total no-no for Prizren standards, if it wasn’t for my good friend Burim who is well versed in these kinds of things and who after a brief gesturing with the waiter found us the best compromise we could hope for. Our prime real estate had a view towards the promenade, and it didn’t matter one bit that we sat on improvised seats made out of a pillow on top of a gajbe, a sturdy plastic beer crate.

If a week before the storm I had to make due with an improvised seat, then what about day zero, I wondered?

“We often make due with what we have,” said Albert Doci, the owner of Kafja Jeme, “sometimes even bringing stuff from home — extra chairs, tables, and anything else that might do the job.”

The annual impact of Dokufest on Kosovo’s economy is estimated to be over 4.7 million euros, according to GAP Institute study.

Doci said that during Dokufest, the business at his establishment doubles, or even triples during the weekends, so he just plays it safe by doubling the inventory for that week. He has four regular waiters on staff, and hires an additional two just to be able to cover the Dokufest crowds.

“During rush hours, you can even see a random friend or family member who’ll jump in to help. They may have never been behind the bar before, but you’ll just see them washing glasses or pouring drinks.”

Future in the making

The theme of this year’s Dokufest is future. It is a theme open for interpretation, as was seen in different variations of its slogans, like ‘future is my love’ and ‘future is not dead.’

When I entered the Dokufest offices on Saturday afternoon, I was not surprised to see the staff hard at work. The three o’clock slump was not noticeable among the clicking of the keyboard keys, or phone calls, or the choreographed-like traffic in and out of the offices.

Dokufest is well known for the involvement of its volunteers. “This year there were around 480 applications for 140 volunteers,” said Nita Deda, Dokufest’s Festival Director. They all range from 16 to 22 years old and you can spot them around town wearing white t-shirts reading ‘I’m so future.’

Two boxes had just arrived and one of the young gentlemen crouched down to unpack them. “It’s the new projectors,” he said.

At that moment, Eroll Shporta, one of the founders of Dokufest, had just come back from a fitting with Krenare Rugova, the fashion designer who is working on a suit he will wear on the opening night. He will be giving the welcome speech. However, he is more of a jeans and T-shirt kind of a person, and jokingly said, “I didn’t even wear a suit when I got married.”

Strolling through Prizren’s narrow streets with my good friend Burim, we came across Likana Cana, DokuPhoto coordinator. Together with a friend they were canvassing for large walls around the city. The Marubi National Museum of Photography from Shkoder in cooperation with Dokufest are bringing a collection of photographs from the vast collection of the Marubi photography studio, founded by Pietro Marubi in the 19th century, to Prizren for the first time.

The city itself will serve as an exhibition space and giant printouts of photographs will be affixed on walls around the city in a sticker street art technique. A verbal deal was struck and my friend Burim gave the OK for the wall of his house to be used as one among many walls to host Marubi’s giant photography gifts. 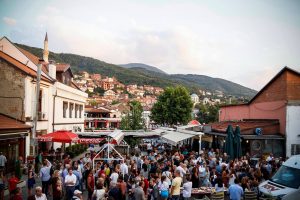 To Heal, Serve, and Protect

“We have never increased the number of on-call staff, but we delegated responsibility to department chiefs, who then have the authority to call for reinforcements in staff,” said Avdaj. “Fortunately,” continued Avdaj, “experiences from the previous years have shown that there haven’t been any complaints, concerns, or negligence in the administering of medical services [during Dokufest].”

Prizren’s emergency room consists of 10 observation beds and 2 reanimation beds. They are spread out throughout different rooms or cordoned off by curtains. Dr. Kujtim Kryeziu, the chief of the Prizren ER, said that the influx from the diaspora, high temperatures, and an increase in car accidents during the summer create concerns for the staff.

“Last year, during the period of Dokufest, we had about six or seven cases that could in some way be linked to the festival,” said Kryeziu. “Cases ranged from fever to exhaustion, headaches, to diarrhea.”

As we spoke, Kryeziu had to step out of his office to deal with a case of a person fainting. Upon his return, he informed me that one of the challenges for the ER is that they are short staffed. There are four resident doctors on staff, and they expect three new doctors to join the team as soon as they complete their residencies.

The greatest concern for Kryeziu is the use of drugs, especially by minors.

In fact, according to Hazir Berisha, the spokesperson from Prizren’s Regional Police Directorate, there has been an increase in the number of drug-related arrests during Dokufest, from nine cases in 2015 to 25 in 2016.

But, the number does not necessarily indicate an increase in users, as much as it indicates the police’s increased awareness and vigilance, Berisha said.

On the other hand, the overall criminal rate in Prizren has decreased by nine per cent from 2015 to 2016. In 2016, there were no criminal cases directly connected to Dokufest, either.

According to Berisha, there is no need to call in reinforcements from other regions since there is a special Dokufest unit, which acts according to an Operation Plan coordinating police stations in the region, traffic police and plainclothes law enforcement.

Similarly to the ER, Berisha is more concerned about the return of the diaspora, the wedding season, drunk driving, and even celebratory gun discharges at weddings. “Dokufest presents no great challenges,” he concluded. 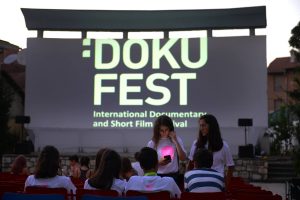 “Dokufest cannot function outside of Prizren’s context,” said Deda. “It’s not like some recipe you could duplicate somewhere else, it is specific to this place.”

A cinema on the river, panel discussions at a restored hammam, a cinema at the fortress, the use of city walls for the Marubi exhibition: these are only some of the ways that Dokufest has creatively used Prizren’s rich cultural environment. According to Deda, by using these locations, Dokufest promotes tourism and cultural heritage in the city, and even in Kosovo.

“Dokufest has played a crucial role in prioritizing arts and culture in the eyes of the government,” said Hajrulla Ceku, Program Coordinator at Ec Ma Ndryshe, an NGO involved in cultural heritage issues in Kosovo.

Most of Prizren’s festivals are organized in its historical district. A lot of businesses benefit from their proximity to it. But the lack of planning and oversight from the state, according to Ceku, has led to a situation in which the problems of supply and demand have to be solved by businesses.

For example, in order to make space for the construction of a parking lot or a hotel, a house in the historical district (protected by the law) had to be demolished. There are even paradoxical instances in which charges are raised against a given business by one branch of the state, while another branch issues them a licence and taxes the business.

“The state has become an accomplice in the destruction of the historical district,” said Ceku.

According to Ceku it is a shared responsibility of both the state as well as those who benefit from the historical district to protect this precious environment. Ceku said that since state has completely failed in this regard, the responsibility is double for individuals and cultural organizations alike.

“The historical district will survive only if the beneficiaries develop a healthy relationship with it,” he said. And Dokufest’s role here is very important, according to Ceku. “As the biggest festival, Dokufest’s decisions [and actions] carry a special weight and have the greatest impact [in the community].”

Both Deda and Ceku mentioned Dokufest’s origins — a movement that began as as a response to the city not having a working cinema. “And in the process, they discovered that the cinemas were the very monuments of the historical district — that they don’t actually need a cinema per se, because the city is their stage,” said Ceku.

One of the things Dokufest was vocal about was a campaign against the demolition of Lumbardhi Cinema. In fact what started as a protest performance at Dokufest in 2014, resulted in a widespread cooperation between individuals and NGOs, among which Ceku also holds considerable merits. During this year’s Dokufest, the recently refurbished indoor cinema of Lumbardhi will have its debut.

Dokufest also contributed to plans for the revitalization of Prizren’s fortress, which was renovated by Cultural Heritage Without Borders, ChWB, with funds from the US embassy. This year’s edition of Dokufest is again cooperating with ChWB to bring a special musical program  — Robert Bisha as well as Vincent Moon — which will be held in a newly built stage inside the fortress’ walls.

“Because our youth can’t travel,” said Deda, “we try to bring the world home to them. We also promote the local talent, let’s say music bands or young filmmakers, [a lot of them have their] debuts [at Dokufest].”

On my last night in Prizren, just a couple of nights before the festival began, the installation at the fortress — a mere giant wooden scaffold when I had seen it in the early stage of construction — was now complete. From Shadervan, you could see the writing on the fortress wall above. “Future my Love,” it announced to swarms of selfie takers below.

Political stalemate in Kosovo as PAN boycotts the Assembly