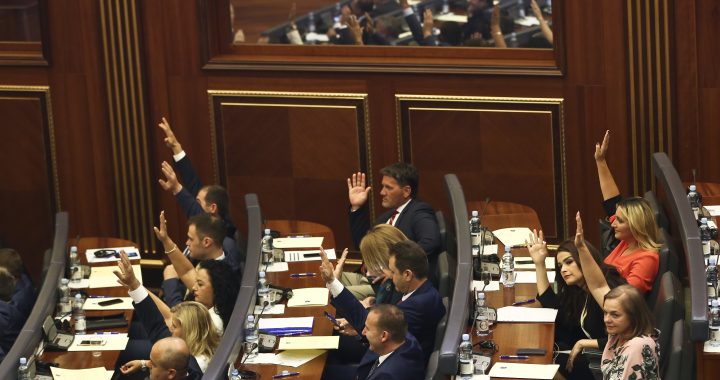 Political stalemate in Kosovo as PAN boycotts the Assembly

Asking for consultative meetings, PAN coalition MPs are boycotting the Kosovo Assembly in a bid to postpone the vote on speaker and government leader until “a package deal” is reached.

The constitutive Assembly session was once again postponed after PDK-AAK-Nisma, PAN, coalition MPs refused to attend. The meeting, called by the session leader Adem Mikullovci, the oldest MP who is in charge of the proceedings until the speaker is voted in, was quickly postponed due to the winning coalition’s boycott. The coalition is supposed to be the first to nominate a candidate for the Speaker of the Assembly.

Vetevendosje and the LDK-AKR-Alternativa coalition representatives criticized the boycott, which puts the country’s highest institution in a stalemate.

“The biggest problem is that [PAN] lacks the votes to elect Kadri Veseli as Speaker,” said Glauk Konjufca, representative of Vetevendosje’s parliamentary group. Veseli, who served as the last Assembly speaker and is the leader of the Democratic Party of Kosovo, PDK, has indicated that he would be willing to forego the post if the Alliance for the Future of Kosovo, AAK, leader Ramush Haradinaj, the coalition’s prime minister candidate, is voted for by all parties.

“His resignation would benefit Kosovo. We invite him to keep this promise, but he is not in a situation to set conditions,” Konjufca continued.

The PAN coalition, with the exception of maverick Nisma MP Milaim Zeka, boycotted the constitutive session, stating that they would only return if “a spirit of understanding” is reached through consultative sessions.

In a bid to find a compromise, Mikullovci called a consultative meeting amongst party representative at noon. But, Vetevendosje and LDK reps left the meeting fuming after Enver Hoxhaj, PDK’s representative, proposed that the parties agreed to “a package deal” for the Speaker and Prime Minister.

“After a long discussion, we don’t have an agreement. We expect the leader of the session to set the date for the session according to his competencies,” Avdullah Hoti said upon leaving the meeting. “Requesting to vote on the establishment of the Assembly together with the government is based on no ethical norms.”

Upon PAN’s request, the leader of the session called another consultative meeting, to be held next Wednesday.

Meanwhile, Hoxhaj defended PAN’s insistence to postpone the proposal, saying that it would not be a single vote.

“Of course the Speaker and government are not voted on at the same time, but yes it is a package. In the political sense it is a package,” Hoxhaj said.

“The meeting showed PAN’s tendency to drag the Assembly’s establishment, because they don’t have the votes. They want to impose absurd requests,” said Konjfuca, calling Hoxhaj’s proposal ridiculous. “We cannot talk about compromise. We are against any kind of coalition with PDK. We ran with this political position.”

Konjufca also informed that Vetevendosje was unwilling to attend these consultative meetings, and that they would only attend the Assembly session once it is resumed.

“We are for the Assembly session, not for political roundtables,” Konjufca concluded.