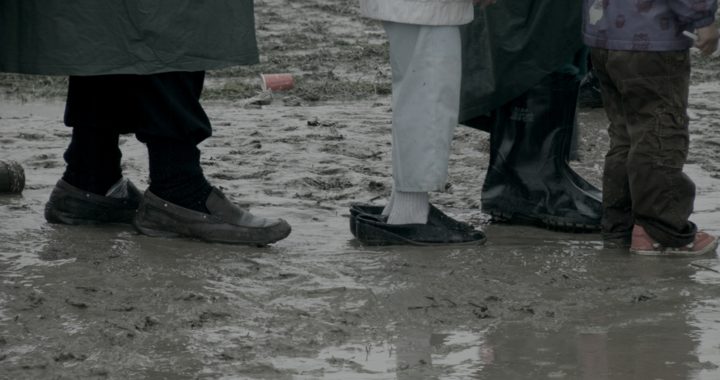 “Spectres Are Haunting Europe” offers an uncompromising testimony of life in the Idomeni refugee camp and stirs up memories of Europe’s past refugee crises.

Two years ago, the world’s attention was caught by dramatic scenes of people fleeing war and persecution, crossing the Mediterranean in leaking wooden boats and rubber dinghies, walking along train tracks of the Balkans countries with their few belongings, risking their lives every day to find protection in Europe.

In March 2016, the shutdown of the so-called Western Balkans route to EU countries left thousands of people stuck in limbo and facing an uncertain future.

Despite a decline in international media attention, many migrants and asylum seekers are still waiting for official answers that will seal their fate, as a long-term solution has yet to arrive. Spectres Are Haunting Europe is a message to the world not to forget them, and not to forget our collective past.

Maria Kourkota and Niki Giannari’s debut feature documentary opens a window directly into the thick of the action in the makeshift refugee camp of Idomeni, Greece, where some 14,000 people found themselves trapped last year when the Greek-Macedonian border was suddenly closed.

This observational documentary is decidedly political, but even more so, it is poetic and humanistic. A series of static camera shots cause viewers to bear witness to the situation on the ground.

People walk silently under the near-constant rain along a muddy road, carrying their possessions or a younger child, sometimes pushing an older relative on a wheelchair.

In the camp, a voice blares out repeatedly from screeching loudspeakers, announcing the closure of the border between Greece and Macedonia. The announcement is repeated, intermittently, throughout the film.

Everywhere, between tents and containers on mud-soaked land, there are lines: of people queuing for food or medical aid, of young couples with their babies, of older men and women staring into the distance in disbelief. “Wherever I see a queue, I go and stand with others,” one refugee tells another.

Many children don’t seem to grasp the situation. Some look exhausted and cling to their parents. Others try to overcome boredom with rocks and sticks turned into toys; they run around and beam at the camera, offering the viewer a few rare moments of direct engagement.

Adults protest against the closed border by sitting on the railway tracks, determined to not let the train pass through. Inevitably, some of the adults talk politics. Some are bitter at the situation, blaming the Greek government for inhumane treatment, while others seem more inclined to gratitude and just want to continue their journey to other EU countries where they have family.

Hearing refugees and migrants voice their ideas and insight directly is definitely a remarkable moment in the film and a rarity that mainstream news outlets seldom bother sharing.

More shuffling of muddy feet in this and that direction interrupts the political altercations.

The documentary is not easy to sit through with its mostly silent narration. But perhaps this is necessary to better understand the uncertainty and hardship facing those in the camp. It leaves viewers to try and make sense of the situation by themselves – just like refugees and migrants have to.

The final part of the film is the most poignant and enlightening. The image turns black and white and suddenly it strikes familiar notes in our collective memory. The train tracks, the tents, the tired bodies bring to mind footage of Europe’s past refugee crises, whether the 1923 Greek/Turkish population exchange, the Second World War, or the breakup of Yugoslavia.

A female voice-over reads poetry, written by Giannari, about refugees as “persistent figures of some genealogy of our own.” It has an almost awakening effect.

Viewers are reminded that the Western Balkans route has been crossed by refugees and migrants for centuries.

Idomeni becomes just one example of something that has gone very wrong before. Yet, those most affected still believe in hope for a life in safety and dignity. Hope that is conveyed by the final images of the film, with people in the camp smiling timidly to the camera, women and men sitting patiently in their tents, children goofing around.

Spectres Are Haunting Europe suggests a particular kind of understanding of the current refugee and migrant crisis that reaches back to Europe’s memory to make their hope a reality.

“Spectres Are Haunting Europe” will screen on Saturday, August 5, 8:00 pm at the Kino N’Lum theatre, part of the Dokufest International Documentary and Short Film Festival in Prizren, Kosovo.