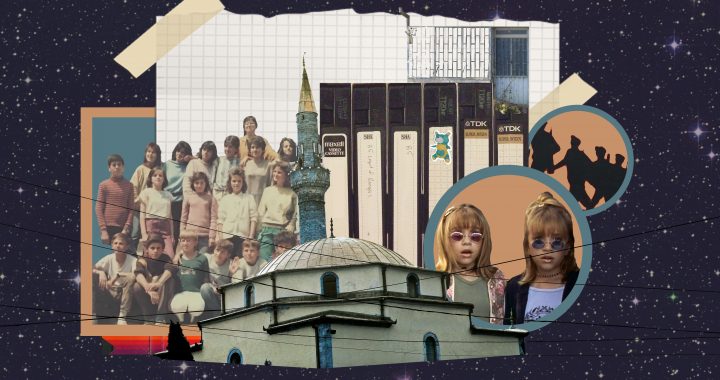 Zipping through the 90s

A memento to a by-gone childhood in ‘90s Kosovo, “Recollection” is a colorful collage of home videos and popular footage that defined a generation’s struggle.

At an outdoor wedding, guests dance while the bride sits as stiff as a board, swallowed by a puffy late 80s gown, as a mother, or perhaps a mother-in-law, slaps and places the nuse’s hands to rest properly on her lap.

It could be anywhere in Kosovo, and this is exactly what first-time director Art Haxhijakupi is playing with in his 40 minute collage of home videos and popular clips from the 1990s. The lack of context, narration and an overall guidance might be unsettling, but it also offers a chance for immersing yourself in the material, especially if you’re from Kosovo.

Footage flips to commercials airing out of Nis, then the family sitting in the living room watching Kassandra, the early ‘90s Venezuelan telenovela, with Serbian subtitles. Each scene throughout the documentary is separated by a moment of static. Protests in Mitrovica and the “bread for Drenica” march are separated by clips of a Snow White cartoon dubbed in Serbian and the Super Mario videogame. This play between the historic and the banal create tension for the audience.

Though clips from the war period evoke the surrounding trauma and violence–Serbian fighters load up their weapons and patrol the countryside, Slobodan Milosevic, in a press conference filmed by AP, says in a dark voice that he “will not negotiate with terrorists”–the footage the director chose to show is not explicit or violent.

As much as the film is an attempt to speak to a collective memory of that time, Haxhijakupi is also exploring the personal perspective of a child in 1990s Kosovo. In that sense, it might strike a note with a young national audience the most.

The most captivating aspect of his selected footage is what it captures about the socio-political moment through music. There’s a red thread weaved between his choice to include a “Song for the University,” complete with traditional costume and dance, to alternative ‘90s icon Adelina Ismaili crooning “Ushtrine Time Do Ta Bej me Ibrahim Rugoven” (I Will Raise My Army with Ibrahim Rugova), about Kosovo’s ‘historic’ President, in braids and hot shorts.

A significant portion of the film is made up of homevideos of vibrant children lining up in the living room to belt out lyrics about Adem Jashari, or “No slavery in the homeland,” songs for the nationalist cause. “From Albania to Kosovo, I’m singing for you, Drenica,” the kids sing, performing passionately for their parents in between giggles.

Recollection screens on Tuesday, August 8, 22:00 at Kino Plato, and Wednesday, August 9, 12:00 at Shtëpia e Kulturës as part of Dokufest, the international documentary and short film festival held in Prizren, Kosovo.