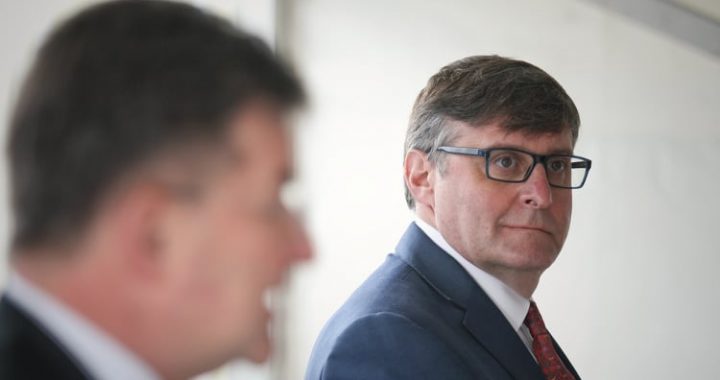 The EU and the US are back on the same team, but is it enough to save the dialogue from its flaws and deliver a final agreement?

The visit was an encouraging sign from what is an otherwise all-too-discouraging EU-mediated negotiation process between Kosovo and Serbia. The talks have not delivered concrete results, and confidence in EU facilitation continues to wane.

However, this most recent dialogue reset could prove to be successful, if the EU and US make it so.

Prishtina-Belgrade relations are not warming anytime soon, and the gulf between the sides still may be too great to reach a comprehensive settlement – particularly full normalisation and mutual recognition.

The parties have very divergent views on the talks. Kosovo, most of the EU, the US, and a majority of states around the world believe the dialogue to be a relatively short-term process between two sovereign states aimed at normalising relations. However, Serbia and its backer Russia disagree: they feel it is an open-ended, long-term process, essentially aimed at renegotiating Kosovo’s status.

Adding to this lack of clarity is the EU’s own position. Its five member states that do not recognise Kosovo – Cyprus, Greece, Romania, Spain, and Slovakia – prevent a solid EU foreign policy on the dialogue and render it neutral to Kosovo’s sovereignty. This naturally strengthens Serbia’s negotiating position, as the parties are not treated as equals.

Further weakening Kosovo’s position is that, as the relatively weaker party in the talks, it is continuously requested to compromise, reducing enthusiasm for full normalisation as the proximate and ultimate goal.

The Greek Foreign Minister’s recent visit to Prishtina is a positive sign from the EU non-recognizers. However, short of forming bilateral recognition and/or outward support for visa liberalisation, Greece and the rest of the ‘EU five’ greatly undermine hopes for any real results.

Finally, the EU’s main carrot to encourage the dialogue, eventual EU membership, is not as ripe or appetising as it once was. The timeline for EU accession for Kosovo and Serbia is still unclear, and seems likely to be a prolonged process.

Meanwhile, Kosovo has witnessed that its previous commitments have not translated into progress in EU accession or action from the Union. Despite meeting the European Commission’s criteria, it has still not been granted visa liberalization.

The EU has been more eager in its wooing of the current autocratic-leaning Serbian government, but there is not much progress there either.

US leadership and decisiveness can help

As is often the case in the Western Balkans, US leadership can prove decisive. There is a clear window of opportunity presented by the Biden Administration’s commitment to renewing and strengthening US-EU relations, in contrast to the more confrontational approach of its predecessor.

Achieving a full normalisation of relations between Kosovo and Serbia offers a concrete opportunity for EU-US coordination, a joint success, and a demonstration of strong EU-US ties.

It would also be a key success in what’s quickly becoming another battleground for Euro-Atlantic competition with Russia and China. The latter’s incursion into the Balkans, and the continued Russian upheaval of countries’ pro-EU, pro-NATO stances, represents a clear, pressing challenge.

In the region, Albania, Macedonia, and Croatia have clearly pro-West orientations, whereas Serbia portrays itself as pro-West, while continuously deepening ties with the East. Montenegro is a member of NATO and traditionally pro-West, yet political forces leading its current government appear to want to change that. Kosovo and the majority of political forces in Bosnia and Herzegovina are also pro-Western but lack any sign of tangible Euro-Atlantic integration.

A success on Kosovo would sharpen the Euro-Atlantic perspective for the region, whilst pushing back against Serbia and friends’ open challenge to Euro-Atlanticism. This in turn can help strengthen alternative, democratic forces in the region.

What agreement and when?

Despite Lajcak’s bold proclamations of resolving the process within a matter of months, it seems unlikely that a comprehensive agreement can be reached soon.

Serbia will likely be unwilling to enter into any significant deal ahead of its Spring 2022 parliamentary and presidential elections. Meanwhile, Kosovo is also in no rush to negotiate, as its new government tackles the pandemic and domestic reforms.

Instead, we may see another interim, EU-facilitated agreement on a practical aspect of Kosovo-Serbia relations, potentially addressing the fate of the missing, as some form of a consensus appears to have already been reached there, or even a deal outlining further economic cooperation.

However, given the current doubts, and the lack of a unified EU position on the parties, it is unclear whether the EU can ultimately deliver a comprehensive settlement leading to full normalisation. The above factors must change. If not, it may mean failure.