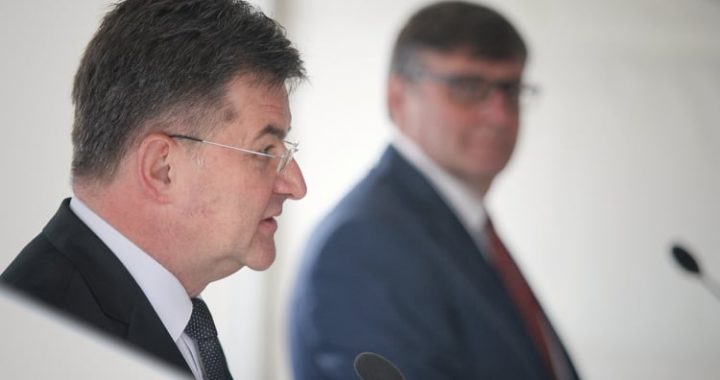 EU Special Representative for the dialogue Miroslav Lajcak has said that his two-day visit to Prishtina has been focused on preparing the first meeting in Brussels between Kosovo Prime Minister Albin Kurti and Serbian President Aleksandar Vucic.

During a two-day visit to Prishtina, EU Special Representative for the Kosovo-Serbia dialogue Miroslav Lajcak revealed that Kosovo Prime Minister Albin Kurti and Serbian President Aleksandar Vucic are to meet in Brussels in a matter of days.

Addressing a press conference on Tuesday, Lajcak revealed that the main purpose of his visit was to prepare the ground for this imminent meeting.

The EU diplomat added that 2021 had the potential to be a good year for relations between the Union and the Western Balkans, referencing two meetings of the 27 EU foreign ministers and a Western Balkans summit in October.

Lajcak has been accompanied on his visit to Prishtina by Matthew Palmer, the US Special Envoy for the Western Balkans. Appearing alongside Lajcak at Tuesday’s press conference, Palmer confirmed US support for the EU-mediated dialogue, describing it as “the only way to normalise relations” between Kosovo and Serbia.

Opposition parties in Kosovo have recently stressed the need for US involvement in the dialogue, with AAK leader Ramush Haradinaj calling for the appointment for an envoy focused on the Brussels talks.

However, Palmer stated that the US was not a party in the dialogue process, but a partner. “We are actively involved working with both Serbia and Kosovo, but also with Mr. Lajcak’s team in support of reaching an agreement on normalisation of relations,” he said.

Questioned about the formation of the Association of Serb-Majority Municipalities, Palmer stated that “the form that it takes is the form that is agreed by the parties.”

Following a meeting with both Lajcak and Palmer on Monday, Kosovo Prime Minister Albin Kurti said that cooperation between the EU and the US in regard to the dialogue is both welcome and necessary.

Kurti stated that the timing of the meeting was also significant, with a meeting in Brussels with Serbian President Aleksandar Vucic scheduled for mid-June.