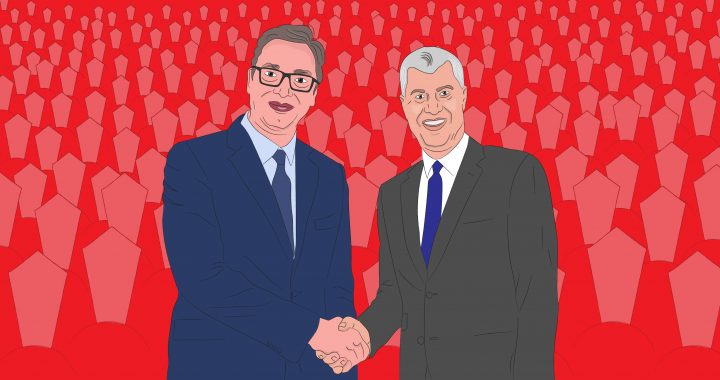 Collective amnesia for an elusive normalisation of relations

Proposing amnesty for war crimes as a golden ticket to securing a final comprehensive agreement between Kosovo and Serbia jeopardises the pursuit of justice for human rights violations in Kosovo, with a senseless disregard for victims and their families.

An amnesty for crimes committed on the territory of Kosovo during the war has once again been raised as a solution for finalising a comprehensive agreement between Kosovo and Serbia.

Such a proposal has been made before, and it remains a gross miscalculation of the nature of the peace and reconciliation that people in Kosovo have been seeking, with impunity for war crimes contradicting the very foundations upon which Kosovo’s statehood is based.

Mass violation of human rights by the Serbian Government throughout the 1990s led to both the creation of the Kosovo Liberation Army, KLA, and the NATO intervention to end the war in Kosovo.

While established with different political aims in mind, the interventions of both were primarily justified on the basis of the protection of human rights in Kosovo. The existence and confirmation of these human rights violations paved the way for the country to affirm its statehood, declared unilaterally by the Kosovo Government in 2008.

Meanwhile, accountability for the crimes committed was handled primarily by the International Criminal Tribunal for the Former Yugoslavia, ICTY, which investigated and prosecuted high-ranking Serbian and Albanian leaders for violations of human rights until its dissolution in 2017.

However, the pursuit of justice through the ICTY left many victims and their families without the justice they were searching for, and led to neither acknowledgement of victims’ suffering by the perpetrators, nor acceptance of responsibility from any party involved in the conflict.

This has left public discussions over the past in an unhealthy state in both Serbia and Kosovo. A public statement made last week by the now former adviser to the Kosovo Government, Shkelzen Gashi, restated that members of the KLA are responsible for crimes committed during the war, a truth long-since established by the ICTY.

However, Gashi’s comments were met with widespread and heated criticism from Kosovo Albanians, and ultimately led to his dismissal.

In Serbia, such denial is even more common. No Serbian institutional leader has ever publicly acknowledged the responsibility of the Serbian Government for the committed crimes in Kosovo, or offered a public apology. This is not expected to happen any time soon either.

The consistent narrative espoused by Serbian leaders of “Albanian terrorists and their war crimes” helped lead to the creation of the Kosovo Specialist Chambers, a court investigating the crimes of the KLA, the biggest criticism of which has been its blatant ethnic discrimination. Although no indictments have been issued by the Specialist Chambers yet, many Kosovo Albanians with links to the KLA have been interviewed so far.

The sense of injustice among the victims and Kosovo as a whole is further compounded by the small number of individuals held responsible for their crimes across the many justice mechanisms that dealt with the war in Kosovo.

The opposite is true: among the five cases which involved crimes occurring in Kosovo that were brought before the ICTY, three of them were against Serbian officials and two against leaders of the KLA. Data from the Humanitarian Law Centre notes that Kosovo courts dealt with 48 cases of war crimes between 1999 and 2018. 44 of those indicted persons were Serbs, and 61 were Albanians.

In terms of the number of victims of the war, proper documentation has not been conducted by any government, while credible documentation by local civil society organisations continues to be widely disputed.

However, the Kosovo Humanitarian Law Centre’s Memory Book project shows that from 1 January, 1998 to 31 December, 2000, 10,093 civilians lost their lives or disappeared in Kosovo. Of them, 8,645 are Albanians, 1,013 are Serbs, 262 are Roma, Ashkali and Egyptians, 84 are Bosniaks and 203 are of other nationalities. Researchers have estimated that the number of victims of sexual violence sits at 20,000, most of whom are of Albanian ethnicity.

Truth-finding initiatives outside of the courtroom have barely had the opportunity to get off the ground. The Regional Truth Seeking initiative, for example, has spent years trying to muster political support, to no avail.

An initiative announced by the Kosovo President to establish a truth and reconciliation commission in 2018 has largely been kept under wraps and out of the public eye. Its failure to conduct a comprehensive and inclusive consultation process in preparation for the commission’s operation is already a very negative indicator for the future commission’s success.

The lack of a much needed public debate on matters of the past is undermining the ability to achieve sustainable peace between Kosovo and Serbia. The EU-facilitated dialogue has not made room for the discussion of any issues related to dealing with the past within its framework, substantially hindering any meaningful initiative in this regard.

The political discourse around the dialogue, dominated by the necessity of a comprehensive final agreement between Kosovo and Serbia, has moved through several stages.

The possibility of including a war crimes amnesty as a part of the final agreement between the two countries is the latest suggestion, (re)introduced to the public just a few days ago, and has naturally triggered vehement opposition from victims groups and the wider public.

An amnesty for war crimes would amount to a senseless disregard for the human rights fought for in Kosovo both through the humanitarian intervention in the 1990s and the pursuit of justice at the ICTY. Promotion of this idea compromises the legitimacy of Kosovo statehood, a state that was built upon the ideals of human rights and equality.

In upholding human rights standards, the fight against denial and impunity for war crimes is of the utmost necessity. The right to truth and justice without discrimination is imperative for all of us. We should all be conscious that peace cannot be built at the expense of justice, and we should not allow collective amnesia to doom us to draw the short straw in an elusive normalisation agreement.

The Kosovo-Serbia dialogue should be guided by the international norms and standards embedded in the UN principles and EU framework on transitional justice, and efforts towards acknowledgement of the victims and reparations should be intensified and prioritised in both countries.

Nurturing denial on one side will sustain denial on the other, and all that will remain is a mutual failure to obtain justice for the victims of the war.

Raba Gjoshi has an MSc in Politics of Conflicts Rights and Justice from SOAS, University of London. Gjoshi is a clinical psychologist. She was a former director of Youth Initiative for Human Rights office in Kosovo.