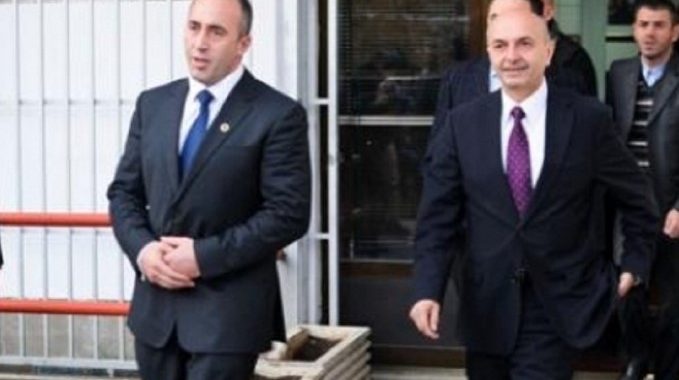 The Democratic League of Kosovo, LDK, signed an agreement with former Prime Minister Ramush Haradinaj’s party the Alliance for the Future of Kosovo, AAK, on Wednesday in its efforts to form a multi-party coalition to lead Kosovo’s next government.

The leaders of LDK and AAK signed a coalition agreement on Wednesday that would see the two parties playing a leading role in Kosovo’s next government.

LDK leader Isa Mustafa announced the party’s intention to lead a coalition of parties that would form the next government last week. LDK nominated former deputy prime minister Avdullah Hoti as its prime ministerial candidate after Kosovo President Hashim Thaci confirmed that he would offer a mandate to any coalition capable of establishing a parliamentary majority.

AAK’s leader Ramush Haradinaj confirmed to the media on Wednesday that an agreement had been reached with LDK after a meeting between party representatives.

“Today I met with the leader of LDK, Isa Mustafa, and their nomination for prime minister, Avdullah Hoti, and we signed the agreement,” Haradinaj told the press.

Haradinaj was the country’s prime minister until July 2019, when he reportedly resigned in response to an interview summons from the Hague-based Kosovo Specialist Chambers, triggering new elections.

The former prime minister’s party won 13 seats in the Kosovo Assembly at the October 2019 parliamentary elections. Haradinaj revealed on Wednesday that his party will take control of some of the Kosovo executive’s key ministries in the next government.

One section of the AAK-LDK agreement, which was published by news outlet Telegrafi, identifies the key objective of the coalition as “re-starting the dialogue with Serbia to reach a comprehensive deal that needs to result with mutual recognition of existing borders.”

The complete structure of the new cabinet is not yet known, as a comprehensive governing agreement cannot be reached until LDK has entered into partnership with several other parties that would secure a coalition of at least 61 of the 120 MPs sitting in the Assembly.

In order to secure this majority, LDK, which holds 28 seats in parliament, is expected to also sign a deal with the NISMA-AKR coalition, who have six seats in the Kosovo Assembly, and Lista Srpska, who hold all ten seats reserved for Kosovo Serb representatives. LDK will also require the approval of representatives holding the ten seats reserved for Turkish, Bosniak, Roma, Ashkali and Egyptian communities.

Officials of the Democratic Party of Kosovo, PDK, have rejected any possibility that they would join a new LDK-led coalition, despite the party’s MPs voting in favour of the motion of no confidence that passed against the Vetevendosje-led government on March 25.

“No PDK MP votes for a government of deceit,” said party leader Kadri Veseli on Tuesday. “LDK and Vetevendosje are responsible for this and they should find the solution. We demand early elections after the pandemic.”

However, during a meeting of political party representatives held by Kosovo President Hashim Thaci on April 22, participants representing PDK voted in favour of Thaci’s proposal to form a new government without resorting to fresh elections.

The incumbent government headed by Vetevendosje leader Albin Kurti has repeatedly demanded that elections be held as soon as the current public health emergency caused by the coronavirus pandemic comes to an end.

Acting justice minister Albulena Haxhiu noted during the April 22 meeting that Vetevendosje intends to challenge any attempt to form a government without elections taking place in court, labelling such attempts as “unconstitutional.”

LDK’s prime ministerial nominee Avdullah Hoti rejected the idea of early elections being held after the pandemic. “As long as there is a majority in the Kosovo Assembly, there is no need for early elections,” said Hoti in a press conference on Wednesday, adding that coalition agreements with other political parties will be finalised “very soon.”