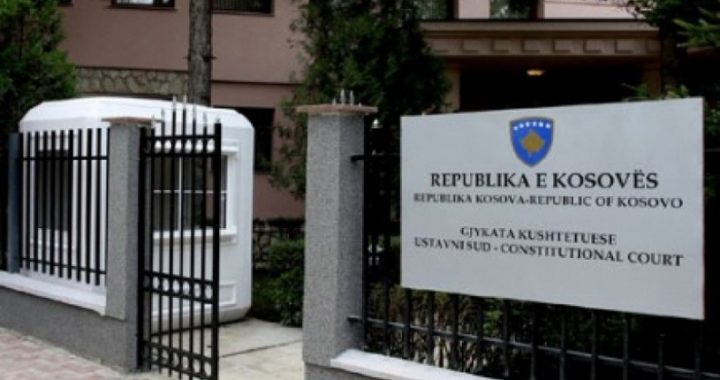 Vetevendosje have sent a decree by President Hashim Thaci proposing Avdullah Hoti as prime minister to be reviewed by the Constitutional Court, with LDK seeking to form the new government on May 2.

A decree by President Thaci proposing Avdullah Hoti to the Kosovo Assembly as the country’s next prime minister was submitted by Vetevendosje to the Constitutional Court for review on Thursday.

Thaci’s proposal of Hoti is the culmination of the president’s attempts to form a new government without holding elections, following the vote of no confidence in the acting Kosovo Government on March 25.

It is a move which has been consistently labelled as ‘unconstitutional’ by Vetevendosje, who say the only solution to the political crisis is fresh elections following the COVID-19 pandemic.

“I know we are in an intensive battle against coronavirus and that can potentially delay the date of elections, but the Kosovo Constitution does not offer any other alternatives,” Vetevendosje leader and acting Prime Minister Albin Kurti wrote to Thaci in a letter on April 1.

However, Thaci stated at a meeting on April 22 that he would offer the mandate to govern to whoever can command a majority in the Kosovo Assembly, after all parties voiced their support for the formation of a new government, with the exception of Vetevendosje.

“Today I received a letter from the LDK leader Isa Mustafa, in which he confirms that [LDK] supports all the prevailing criteria for the formation of the new government, including securing a parliamentary majority,” Thaci announced at a press conference held at 16:00 on Thursday. “In accordance with this letter, I have just decreed Hoti for prime minister.”

Head of Vetevendosje’s parliamentary group Rexhep Selimi accused Thaci of deliberately timing the announcement to prevent the party from submitting the decree to the Constitutional Court, with the court set to have a day off on May 1. BIRN reported on Thursday that the Court extended its working hours past 16:00 anticipating a submission from Vetevendosje.

Earlier in the day, the head of LDK’s parliamentary group Arben Gashi submitted a request to hold an extraordinary session of the Kosovo Assembly on Saturday May 2 to vote in the new government.

“Before 16:00, I submitted a request for an extraordinary session on Saturday at 13:00, where the agenda item will be the election of the government,” Gashi stated in a press release. Vetevendosje’s Arberie Nagavci, who serves as Deputy Speaker of the Kosovo Assembly called on MPs “not to take any action without a decision from the Constitutional Court.”

In addition to AAK and NISMA, LDK also requires the support of Belgrade-backed Lista Srpska, the 10 MPs representing Kosovo’s non-Serb ethnic minorities and the New Kosovo Alliance, AKR, to form a government.

There has been controversy this week over AKR leader Behgjet Pacolli’s attempts to return to Kosovo to take part in negotiations.

Acting interior minister Xhelal Svecla insisted that Pacolli would have to remain in quarantine for 14 days at the Student Centre in Prishtina, as with all Kosovo citizens returning to the country during the coronavirus outbreak. Pacolli rebuked the idea and flew to Tirana via his private jet on Tuesday, with reports that he is set to land in Prishtina on Thursday evening.