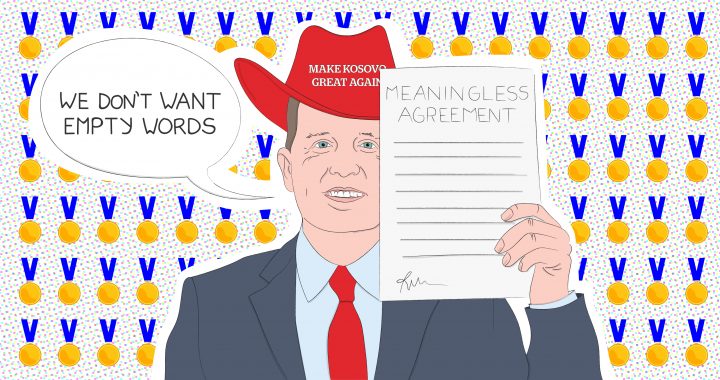 Behind all the fanfare and bravado surrounding Richard Grenell’s latest visit to Prishtina and Belgrade lies more meaningless documents with little concrete information or clear benefits for Kosovo.

“We don’t want empty words,” Richard Grenell said in Prishtina on Monday, before once again outlining the alleged ‘brand new approach’ of the Trump Administration towards Kosovo and Serbia, which is, as he says, “action-oriented.”

On the day of the visit, Grenell and his delegation were described, including by themselves, as a band of cowboys, rolling into town and taking care of business.

The problem is that very little business was actually done in Prishtina on Monday. Kosovo Prime Minister Avdullah Hoti and Adam Boehler, the CEO of the US International Development Finance Corporation, IDFC, simply signed a brief, five-paragraph joint statement.

The statement declares that Hoti and Boehler “share the desire” that a new investment incentive agreement, IIA, will be established between Kosovo and the United States. The letter also states that this new IIA will help advance negotiations on projects agreed between Kosovo and Serbia on September 4 in Washington DC.

Aside from the fact that the new IIA was not signed there and then on Monday evening – merely pledged to be established at “the soonest possible date” – it is also not automatically a positive for Kosovo.

A previous IIA was already established between Kosovo and the US in June 2009, under the stewardship of the Overseas Private Investment Corporation, OPIC, the predecessor to the IDFC, a new body which was created by the Trump Administration in 2019.

Despite this agreement, US investment in Kosovo has been rare over the past decade. According to data from the Central Bank of Kosovo, between 2009 and 2019, less than 200 million euros of direct foreign investment in Kosovo came from the US, of which at least 40 per cent involved purchasing real estate. By comparison, in the same period nearly 600 million of direct foreign investment came from Germany.

Meanwhile, the joint statement from Hoti and Boehler indicates that the new IIA may be more restrictive than its predecessor, with the focus likely to be on the projects agreed on in DC. While more American investment may come, it is likely to be mainly on projects that are aimed at regional development, limiting the possibility to finance projects that develop Kosovo internally.

At the press conference following the signing ceremony, Hoti was keen to push Boehler to state that the agreement will also help provide support to small and medium sized businesses in Kosovo, but there is no reference to this support in the joint statement signed by the pair.

Meanwhile, Boehler spoke of a “billion dollars worth of projects in the pipeline”, referring to a potential new ski resort to demonstrate the breadth of projects being discussed. However, as has become typical of negotiations concluded under the auspices of Grenell, none of this is backed up on paper.

Over the course of 2020, a series of documents have been signed relating to Kosovo and Serbia, all of which have been scant on detail: dates, figures, and guarantees are always conspicuous by their absence.

However, the procession around each document being signed has now become entrenched. A large fanfare and a much photographed signing ceremony precedes a declaration that a ‘historic agreement’ has been reached. There is then a brief, sometimes antagonistic press conference, typically held before journalists have had the opportunity to read the signed documents.

At these press conferences, Grenell remains steadfastly on message. On Monday, he responded to a question from BIRN over President Trump’s statements that his administration was “stopping mass killings between Kosovo and Serbia” by claiming that Trump meant that he was “focused on economic normalisation.”

By the time the documents are analysed their contents are often so underwhelming it defies belief: a “historic flight agreement” turns out to be a ‘letter of intent’ signed by an unnamed civil servant and Lufthansa. This intent seems to have dissipated some time between January and September, as there is no mention of the flight in the Washington agreements.

Meanwhile, Serbia has appeared to flagrantly breach the agreements signed in DC to no reaction from their US mediator.

Just days after the Washington agreements were reached, Serbian President Aleksandar Vucic openly stated that he hoped Israel would reconsider their intentions to recognise Kosovo, despite signing a pledge to refrain from either formally or informally requesting any nation not to recognise Kosovo as an independent state. Soon after, it was reported in the Jerusalem Post that Serbia would refuse to move its embassy to Jerusalem if Israel recognised Kosovo.

References in the Washington agreements to “untrusted 5G vendors”, interpreted by many to exclude Chinese involvement, have also seemingly fallen on deaf ears in Belgrade, where a new Innovations and Development Centre was opened by Huawei last week.

Grenell was silent on both of these issues during his visit to Belgrade on Tuesday. In fact, according to Vucic, he proposed a joint renovation of the Ministry of Defense building bombed by NATO in 1999.

The envoy also oversaw a joint statement signed between the Chambers of Commerce of Kosovo and Serbia, hailing the “amazing progress” that took place this week in Prishtina and Belgrade.

The document signed is yet to be made publicly available, but is reported to include “a plan to establish” a joint sustainable energy sector group and a joint group to facilitate the projects in the Washington agreements.

These visits were sold as a sign of Washington’s commitment to implementing the economic normalisation agreements signed in DC, themselves a nebulous collection of pledges few of which seem in Kosovo’s interest.

However, with the US not signatories to the agreements and Grenell refusing to address potential violations, what assurances are there that they will be implemented?

The US representatives pointed to the unprecedented size of the delegation they took to Prishtina and Belgrade to prove their commitment, but all that was left behind on paper were yet more vague promises and few clear benefits for Kosovo.

This is an era of American diplomacy that Kosovo can only hope ends soon.