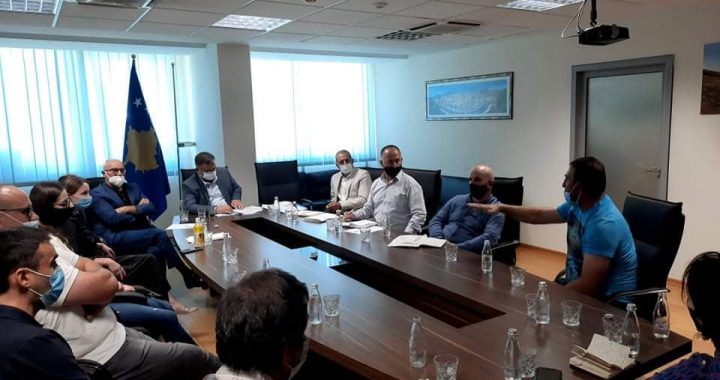 Members of civil society organisations and residents of the Decani Valley met with the Minister of Economy and Environment, Blerim Kuci, on Tuesday to voice their frustrations over damage caused by Austrian hydropower company KelKos.

On Tuesday, environment minister Blerim Kuci met with representatives from a number of civil society organizations including Pishtaret, KOSID, and Mos ma prek Lumbardhin, as well as residents of the Decani valley, who expressed their discontent over the environmental damage caused by the Austrian company KelKos.

KelKos has built and operates several hydropower plants in the Decani valley, which is part of the Bjeshket e Nemuna National Park, and protected by the Law on National Parks.

During the meeting, Shpresa Loshaj, an activist from western Kosovo, asked the minister to ensure KelKos fulfills its obligations to the Municipality of Decan before being granted a new water and environmental permit.

She stated that conditions for being granted another permit should also include rehabilitation of the valley and the Zalli i Rupes river, including implementing legislation which states that 30 percent of water from the Zalli i Rupes should remain as part of the river.

Arben Qorraj, a resident of the Decan valley, told Minister Kuci that construction by KelKos has caused severe damage to the local environment. “Our fauna and flora is destroyed because the flow of the river has stopped,” he said. “I am very disappointed, and I hope that these words will be heard.”

Another resident, Bajram Gjocaj stated that as well as damaging fauna and flora, local residents’ lives are being put in danger due to “irresponsible” work by the Austrian company.

Gjocaj stated that unrepaired holes in the landscape near to his house have often filled with water, causing flooding. “Is there any other place in the world that leaves children surrounded by pits filled with water?” he asked.

Kuci promised to be committed to addressing the group’s concerns as soon as possible, describing their requests as “legitimate.”

“I haven’t gone to see [the Decani valley] because I felt ashamed of what happened there, but likewise, it should be clear that I have not held this post and I am not responsible for the degradation,” Kuci said. “However, we need to work to address this problem as I am here today but perhaps not tomorrow.”