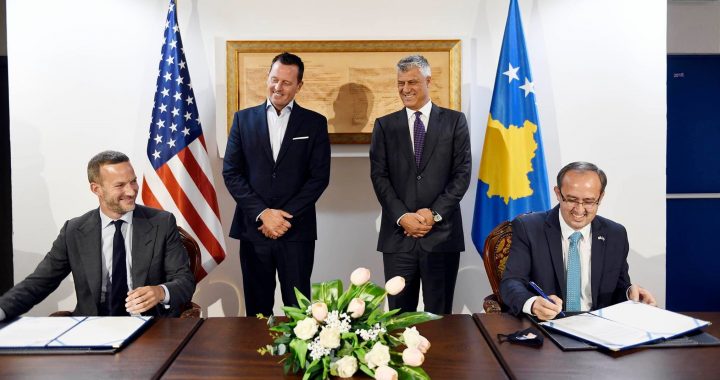 Prime Minister Avdullah Hoti and the head of the US International Development Finance Corporation have signed a joint statement expressing their desire to establish an investment incentive agreement between Kosovo and the United States.

On Monday evening, Kosovo Prime Minister Avdullah Hoti and Adem Boehler, the President of the US International Development Finance Corporation, IDFC, signed a joint statement expressing the desire to establish an ‘Investment Incentive Agreement’ between the United States and Kosovo “at the earliest possible date.”

“The new Kosovo-United States Investment Incentive Agreement is anticipated to provide access to the full range of investment support offered by the US International Development Finance Corporation,” the statement reads.

The statement also indicates that the investment incentive agreement entering into force will help advance negotiations on principles agreed in Washington on September 4.

Boehler, who was hired as the IDFC’s first CEO in October 2019 by US President Donald Trump, stated this would include over a billion dollars worth of projects, including the road and rail projects identified in the Washington agreements.

“We even discussed the possibility of investing in a ski resort to give you a sense of the breadth of projects we’re talking about,” Boehler told a press conference following the signing on Monday.

Boehler added that he was in Prishtina to show how serious he was about investing in Kosovo, describing the visiting delegation as ‘unprecedented.’ The delegation is reported to include officials from the US Departments of Energy and Commerce, and the Chairman of the Export-Import Bank among others.

Hoti stated that the agreement would be implemented in the coming weeks and create thousands of new jobs. “It’s my honour to say that we will move rapidly to implement this deal,” the prime minister said. “It has created a new momentum.”

US special Envoy for Kosovo-Serbia Richard Grenell dialogue thanked Hoti for his commitment to implement the agreements reached in Washington, adding that “each ministry will set up teams to work with the Americans.”