As the deadline approaches for Kosovo’s potential new bid for UNESCO, criticisms resurface about the government’s failed campaign and Serbia’s counter campaign.

Scorched churches, decimated graves, and mutilated Serbian Orthodox frescos. These images fill the homepage of a top hit that appears when googling “Kosovo in UNESCO.” The webpage, NoKosovoinUNESCO.com, launched two years ago as a counter response to Kosovo’s official website, KosovoInUNESCO.com, now KosovoInUNESCO.org.

Just before November 2015, when UNESCO members voted to reject Kosovo’s first application to the United Nations organization, both websites were getting a lot of clicks. On Twitter, #KosovoinUnesco and #NoKosovoinUnesco were trending, as proponents for Kosovo’s membership campaign were ‘trolled’ by the opponents.

The Kosovo Ministry of Foreign Affairs’ website was a stark contrast to its Serbian doppelganger: in an effort to promote Kosovo’s candidacy, it showcased beautiful images of mosques, monasteries, cathedrals, and other sites of cultural heritage sites all stamped with “Kosovo in Unesco,” alongside explanations of traditional folklore and Kosovo society today.

As the June 2017 deadline for re-application approaches, cultural and political analysts are debating the extent to which Serbia’s NoKosovoinUNESCO campaign impacted Kosovo’s first bid. And as the counter campaigners gears up for another round, Kosovo civil society is lamenting the fact that the government has not improved its policies or tactics since the failed application.

UNESCO is a UN agency that funds and collaborates on projects furthering culture, education, sustainable development, and human rights. It has 195 members, including dozens of states that do not recognize Kosovo’s independence.

Although Kosovo does not have a seat at the UN itself, Kosovo’s Ministry of Foreign Affairs, or MFA, took on the challenge and applied for UNESCO membership in summer 2015. It fell short by three votes, with some countries that recognize Kosovo not voting for its membership in the body.

Various other countries applied and were admitted into UNESCO without first being UN member states, including Germany in 1951. Two island states, Cook and Niue, are UNESCO members even without seats at the UN. Palestine, which does not have full UN membership, secured its UNESCO bid in 2011 (after which the United States and Israel subsequently pulled funding from UNESCO and thus gave up their voting rights, including on their right to vote on Kosovo’s 2015 bid. Though the US did use its diplomatic capital to attempt to whip votes from other countries).

Kosovo needed two thirds of the UNESCO members to vote in its favor to join. But in the end, only 92 voted yea, with 50 nays and 29 abstentions.

The failed bid has been considered the country’s biggest foreign policy failure since independence. Political analysts and cultural heritage experts have shared several critiques of Kosovo’s campaign, and have argued that the MFA failed to take responsibility for the defeat.

The vote failed in part because of a counter campaign waged by Serbia, but also due to institutional failures, according to Hajrulla Ceku of the Prizren-based NGO Ec Ma Ndryshe. With weak lobbying efforts and a failure to include of relevant civil society actors and other ministries, the bid was bound to fail, he said. 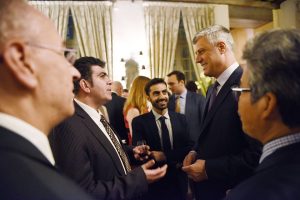 “The then-Minister of Foreign Affairs [Hashim Thaci] and the Deputy Minister [Petrit Selimi] were almost the only figures that publicly led this process… the majority of the campaign catered to the domestic demand,” Ceku told BIRN Kosovo’s television programme Jeta ne Kosove.

“There was no public and cultural diplomacy… all we were saying with the social media campaign was something to the effect of ‘see how beautiful Kosovo is, the cultural heritage we have…’ In fact, such arguments cannot win.”

Former Deputy Foreign Minister Petrit Selimi, who spearheaded the application process, focused on Serbia’s counter campaign in his assessment of the failed bid, calling Serbia’s use of 2004 imagery ‘scorched earth’ tactics and claiming that the government manipulated the Orthodox Church as a propaganda tool. 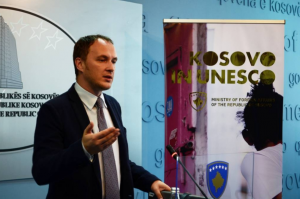 Serbia’s counter campaign was aggressive, with Serbian President Tomislav Nikolic saying that “barbaric” Kosovo Albanians have no culture worth preserving other than “gas stations and cheap hotels” and Foreign Minister Ivica Dacic saying that Kosovo’s application was “the same as the Islamic State applying for UNESCO membership.”

@Petrit @vloracitaku @UNESCO No hard words are needed but you cannot disagree that there is a similarity. Riots 2004 pic.twitter.com/5n8hH42Qpu

“The pivotal issue in Kosovo’s bid has been to convince members that it can protect Serbian religious and cultural heritage sites,” said Greece’s former ambassador in Kosovo, Dimitris Moschopoulos, at a panel discussion at Qendra Multimedia last month.

During the March 2004 unrest, Kosovo’s ‘worst period in its postwar history’ and the source much of the counter-campaign’s imagery, Albanian rioters targeted Serbs and Orthodox monuments. Around 50,000 people were involved in mobs that erupted across Kosovo with several churches being set on fire. 19 people were killed, including 11 Albanians and eight Serbs.

UNESCO has since placed several medieval Serbian monuments on its list of World Heritage List in Danger: the Decani Monastery, the Patriarchate of Pec, the Gracanica Monastery, and the Church of the Virgin of Ljevisa.

The Ahtisaari Plan, or the 2007 Comprehensive Proposal For the Kosovo Status Settlement, pays special attention to Serbian cultural heritage in its six articles for religious and cultural heritage under Annex V.

Article six calls for Serbia to return archaeological and ethnological exhibits taken from Kosovo during the war–over 1,000 artifacts, including prehistoric statuettes, jewelry, and pottery, were taken to Serbia when the Serb forces withdrew from Kosovo in 1999.

The remaining points center on how the Serbian Orthodox Church in Kosovo should exercise full discretion in the management of its property and access to its premises, and is free to receive transparent donations from any party. Special protective zones were established “for Orthodox religious heritage sites and other sites of historical significance for Kosovo Serbs.” In the dozens of outlined zones, construction is prohibited in protected areas without consultation and consent from the Church.

But according to Ambassador Moschopoulos, the Kosovo government did not fully implement the Ahtisaari Plan in Kosovo law. Doing so, he said, is crucial for Kosovo’s path to UNESCO.

“Some pieces of legislation have to be adopted before Kosovo applies again… The Orthodox Church wants the implementation of the full plan.”

Though the Ahtisaari plan’s guarantees were written into Kosovo law as the Law on Special Protective Zones, the Law on Historic Centre of Prizren, and the Law on the Village of Velika Hoca, the legal debate on Kosovo’s cultural heritage provisions is ongoing.

Moschopoulos referred to the draft law on Amendment and Supplementation to the Law on Freedom of Religion, which has not been approved in the Assembly, though “the international community and the Orthodox Church are happy with it.”

He also referred to the Draft Law on Cultural heritage, submitted in April 2015 but “met with fierce criticism by the international community and cultural heritage experts.” He said that the draft law stoked Serbs’ fears that the Kosovo government wants to nationalize Serbian heritage sites and take ownership rights away from the Serbian Orthodox Church.

The Church feels like Serbian cultural heritage is under siege. Dimitris Moschopoulos

It was withdrawn and the Ministry of Culture promised to work on a new draft law, but it has not yet shown initiative, Moschopoulos said.

Moschopoulos also argued that despite legal protections, the Church continues to be targeted: “Last year four people were arrested in front of the Visoki Decani Monastery, in a car with weapons during the night,” he said, referring to events in February 2016. “The Church feels like Serbian cultural heritage is under siege.”

Ceku argued that Kosovo has attempted to remedy the tragedies of the 2004 riots.

“Approximately 10 million euros [were spent] for the restoration of churches burnt in 2004. Thousands of cases brought against the wrongdoers of the time, and hundreds of penalties. Tens of years of imprisonment. Some received sentences of up to 16 years.”

An OSCE report from 2014 found that Kosovo heritage still suffers from neglect, vandalism, and uncontrolled urban development, particularly around sites of Serbian Orthodox heritage. Most incidents appear to involve theft. But even if no ethnic motivation is reported, “such incidents tend to have a negative impact on the perceptions of security.” The 16th century Church of St. George (Runović Church) in Prizren was one of the sites of Serbian Orthodox heritage damaged during the 2004 unrest. It has since been revitalized.

Ceku emphasized the widespread abuse of cultural sites in Kosovo; many historic monuments in Prizren have been demolished or have degraded from neglect and environmental pollution to the point of collapse, including a case last year in which a three-year-old child was killed.

“The international community emphasizes that we should respect the heritage of the other, but we weren’t raised here to see heritage as belonging to separate groups,” he said, alluding to the politicization of cultural heritage. “Ec Ma Ndryshe regularly publishes data on the level of degradation of cultural heritage in Kosovo. We have almost never seen someone from the international community react to any of these if it’s not about degradation of a monument of the Serb Orthodox Church.”

Islamic heritage has not been a part of the debate. The main problem is that Kosovo in UNESCO is being treated as a political issue and not a cultural heritage issue. Sonja Biserko

At the Qendra Multimedia debate, Sonja Biserko, founder of the Helsinki Committee for Human Rights in Serbia, mirrored these concerns.

“Islamic heritage has not been a part of the debate. The main problem is that [Kosovo in UNESCO] is being treated as a political issue and not a cultural heritage issue.”

Cultural heritage and the status debate

The biggest drive–both for the campaign and the counter campaign–seems to come down to the status debate and Kosovo’s quest for international recognition.

Biserko argued that Serbia wants to prevent Kosovo from becoming a member of UNESCO because some of the political leadership still hopes for a deal to partition the north of Kosovo.

Sali Shoshi, Director of NGO Cultural Heritage Without Borders, said that though Kosovo could gain from UNESCO’s opportunities for networking and funding, one of the biggest benefits would be the symbolic: “UNESCO would be a step towards more membership in world organizations.”

Many factors could go into how states vote on Kosovo’s candidacies, especially different countries’ diplomatic relations with Serbia and Russia. One strategy could be to target diplomacy efforts towards recognizing countries that abstained from voting in 2015.

“Maybe there was a lack of attention on our side, for us to have excellent relations and cooperation with these countries at the time. For example, we need to intensify cooperation with Poland in all areas. And If I am not mistaken, at the time we did not have an appointed ambassador to Japan,”  Murtezaj told BIRN.

But new recognitions do not necessarily ensure more support at the voting table; Barbuda abstained from voting on Kosovo’s bid, though it had just recognized Kosovo’s independence six months before.

If the critics are correct, Kosovo’s progress could be a matter of effectively communicating commitment to protect and promote Orthodox heritage.

The Serbian government is gearing up to try and convince member states of the opposite.

Serbian President Tomislav Nikolic and Prime Minister Aleksandar Vucic even released a joint statement on February 20 that one of the most “serious challenges” Serbia is currently facing is to continue preventing Kosovo’s bid for UNESCO membership, reported B92.

Murtezaj said that they have established a collaborative working group to discuss the 2017 application, but did not give any further details. Ceku noted that neither his NGO nor any other cultural heritage NGO he knows of has been invited to this working group.

Countries can apply to UNESCO every two years. As of yet, the Ministry of Foreign Affairs has not yet been forthcoming about its plans for this year.

“We are working as if we are going to apply in 2017,” said Murtezaj. “Today, we do not have a decision on whether we will apply or not.”

*April 6th: The article has been updated to include the website KosovoInUNESCO.org