Recent calls for a lustration law and death threats over a documentary about the Yugoslav regime raise questions about Kosovo’s willingness to deal with its turbulent past.

After KTV aired the first episode of the second season in February 2017, which deals with crimes committed against Albanians after the Second World War and Albanian collaborators with the regime, Lama received a message from an unknown number claiming that the person had “materials” for him.

He called the number and hit the record button.

“I had a feeling – an intuition,” explained Lama, a bespectacled, cheerful old man whose documentaries have garnered only a couple of thousands views on YouTube. He was right – the phone call ended up being his first death threat since he started broadcasting his documentaries in 2014.

On the phone, an audibly angry man threatened Lama and begged him to remove all mentions of his father from the episode. Archival footage used in the episode mentions Bislim Vatovci, a school director, as a collaborator with the Yugoslav State Security Administration, UDBA.  “Don’t get yourself into trouble, and don’t drag me into trouble,” ranted the caller on the phone as Lama tried to calm him to no avail.

The threat was not shocking for Lama, who knew he might hit a nerve with his new series, which includes archival documents about Albanian collaborators and interviews with political prisoners who were tortured during the Yugoslav regime.

The case has been reported to the police and the Kosovo state prosecutor is taking such threats seriously. Chief State Prosecutor Aleksander Lumezi has decided to appoint a coordinator for cases of threats against journalists or other criminal actions that hinder their work. 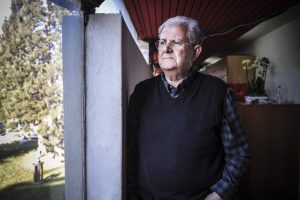 But more than the precarious state of freedom of the press in Kosovo, the threats against Lama augur the difficulties to begin addressing and discussing human rights violations during the Yugoslav communist regime.

There is no accurate data available, but some witnesses represented in Lama’s documentary claim that 500,000 Albanians were interrogated by the Yugoslav state police. Many Albanians worked for the security services that tortured and imprisoned political dissidents who demanded national rights for Kosovo Albanians. Many others, similar to cases in other Central European communist regimes, informed on their neighbors and friends, leading to their arrests and imprisonment.

“There was not a single Albanian family that wasn’t affected by the Serbian regime,” said Kurteshi, who served prison time from 1983 until late 1990.

Now, the Council for Protection of Human Rights Freedom, KMDLNJ, is demanding Kosovo adopt a law on lustration, the vetting of high officials, and the opening of Yugoslav files in the hopes of revealing criminal acts and violations of human rights that occurred before the Kosovo war in 1999.

“The Kosovo war was preceded by a massive and long-term violation of human rights in Kosovo (from 1945-1998) which is considered a period of communist crimes, that ended with open genocide in 1998-99. Albanians and non-Albanians opposed communism in the former Yugoslavia and Serbia and suffered unprecedented crimes. And until today, it has not been possible to ensure access to past files in order to be informed about ‘invisible’ persecutors who today could be holding public office in Kosovo,”  the KMDLNJ wrote in a statement released in late February.

Revealing the truth will not be difficult. We carry the truth, in our souls, in our minds. Sami Kurteshi

“Lustration and revealing the truth are two different things,”  said Kurteshi, explaining that lustration entails the vetting of high officials to dispel suspicions of them having collaborated with the past regime.

Some former Eastern Bloc countries have managed to open the files, while in neighboring Albania, a new commission has been charged with opening the files of the Sigurimi, the Hoxha-era state police.

Macedonia scrapped its law on lustration in 2015, while the other former Yugoslav republics have not managed to initiate the process at all.

“Lustration will be problematic in Kosovo because we don’t have the files, Serbia has them. We only have secondary sources. We can open some files that are in Skopje, in Podgorica,” explained Kurteshi, adding that nevertheless, the files do not represent the whole truth.

“Documents carry only the official truth, which is a truth that has been tampered with, as it was formulated intentionally by UDBA.”

“But revealing the truth will not be difficult. We carry the truth,” Kurteshi said pointing at himself, “in our souls, in our minds.”

Lama’s documentaries, which are part archival research, part oral history, are an attempt at revealing this truth.

“I belong to a generation that feels an obligation to represent the truth about a period which isn’t talked about anymore,” said Lama, who was beaten and interrogated by Albanian Udbashi, UDBA employees, as a high school student. He remembers one night in 1962 when he was tortured until morning because he was suspected of having a book by Stalin published in Albania – a forbidden good – when he was 16 years old.

Lama’s family suffered greatly with the installment of communism: as a wealthy Gjakova  merchant family, they lost their property to nationalization and were cut off from their relatives in neighboring Valbona, Albania.

Lama’s school friend Masar Nuzamala was killed when he was only 13 years old because he sang a nationalist song.

“Only after I found the document [in the archives] did I realize he was killed by UDBA,” said a wide-eyed Lama, whose own brother spent two years in the infamous Goli Otok prison, set on a barren Croatian island.

For the very first time, archival documents–such as the report to the Kosovo Provincial Committee on “deformations” of communism during the political reign of Aleksandar Rankovic, the head of UDBA until 1966–are published in Lama’s documentary. The hundreds of pages that Lama found in archives throughout Kosovo’s cities list the names of police collaborators, who abused their offices and suffered no repercussions for years on end.

“We are a society of oral lore. Putting things down on paper is not in our tradition,”  explained Nora Ahmetaj, a transitional justice expert and human rights activist.

“If the story is based on legends, nobody minds, because we’re used to the fact that the mouth spouts all kinds of things. But the moment you officialize, institutionalize a piece information and find facts, this makes people uncomfortable.”

“Threats are the least that some individuals can do, because they have difficulty dealing with a troubling fact that demands a response and accountability,” she added.

If the story is based on legends, nobody minds, because we’re used to the fact that the mouth spouts all kinds of things. But the moment you institutionalize something, this makes people uncomfortable. Nora Ahmetaj

Ahmetaj’s own family history was marked by political persecutions. Her father’s uncle was killed in the Gjilan massacre of 1944, when Yugoslav partisans butchered the local population upon liberating the border town from the German invasion. Enver Tali, a massacre survivor and a well-known political dissident and activist, was also related to Ahmetaj.

“Our house was ransacked a year before I was born, during the 1968 protests,” claimed Ahmetaj, adding that revealing the truth and dealing with this past is “absolutely necessary.”

“It was understood that UDBA was led by Yugoslav, namely Serbian structures, and that most of them were Serbs, but the family always talked negatively about Udbashis, the Kosovo Albanians who worked there,” Ahmetaj said, recalling the emphasis her parents put on whom she socialized with as a child.

“Significance was given to them [the Albanians], how they were not loyal to the national cause,” Ahmetaj explained. Families of Albanian UDBA employees were ostracized by their community and such stigma continues to this day. This might also explain why Lama’s threatener would demand his father’s name to be withdrawn.

“Historical dialogue entails for all institutions and civil society to complement each other. This takes time, we shouldn’t be fooled… The truth, with documented facts, needs to be known. We need to know and document exactly who served this country, who sacrificed, and who collaborated with the regimes for a richer life,” said Ahmetaj. “A closed society which indoctrinates its population with distorted narratives does not lead towards democratization.” 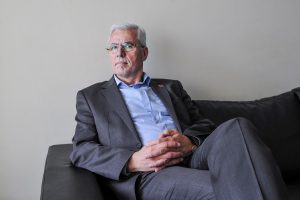 “The only people who are not ready to deal with the past are the ones who are guilty and are criminals,” declared Kurteshi. “This is not about revealing the truth, but hiding crime.”

Kurteshi is a vocal proponent of an institutionalized initiative to vet high officials, claiming many who tortured fellow activists still serve in the justice system today.

“I’m not after personal revenge,” said Kurteshi adding that victims might have been ready to forgive the perpetrators. But he sees no will from the political parties in power to initiate such a process.

“Nobody can say today – I was only implementing the law,” jabbed Kurteshi, adding that Yugoslavia joined the United Nations in late 1945 having signed all human rights conventions which forbid torture. “Be it after the First World War, or the Second World War, or even the last war, hiding crime has become a social trauma. It is not that we’re not ready to deal with the past. The problem is that criminals are in power.”

Recently, Kosovo President Hashim Thaci revealed his plans to establish a truth and reconciliation commission to deal with crimes perpetrated during and after the Kosovo war in 1998-99. Kurteshi is critical of this initiative and calls it a desperate attempt for Thaci to save his own skin from the Specialist Chambers, saying that it is “nothing to do with reconciliation, [there is] no institutional or legal basis for it.”

“Bottom line: we need to reveal the truth, not only for the sake of truth, but to fight crime,” said Kurteshi. “The truth of people needs to come up like vomit like it did in post-war Germany.”

Sitting in the glass-cubicle editing room, Lama is determined to continue his research.

“We need to go through a lustration process – I see it as a national salvation. Let it be known who was who, when, and for whom they worked. This is the only way to get to honorable leaders, and not spineless ones,” Lama said defiantly.