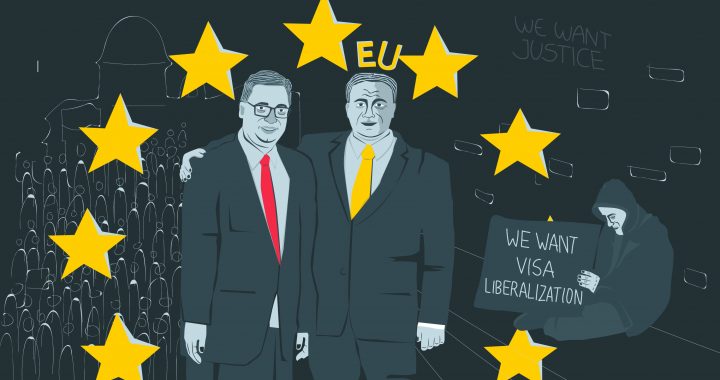 The EU appears to be back in the role of chief mediator between Kosovo and Serbia, but while it may provide relief in comparison to the bizarre attempts of the Trump administration, there are also questions to be asked of this so-called ally of Kosovo.

The Vucic-Thaci summit at the White House scheduled for 27 June was meant to be a triumphant photo opportunity for President Trump and his Special Envoy for the Kosovo-Serbia Dialogue, Richard Grenell. Instead, it imploded before it even began when the Kosovo Specialist Chambers issued a press release announcing that an indictment had been filed against Kosovo President Hashim Thaci.

While in the days before the ill-fated summit, it appeared likely that it would, at most, culminate in a minor economic agreement, the symbolism would have been a potent confirmation that the US had supplanted the EU as the effective honest broker able to ‘force the parties to get along’.

Though the Vucic-Thaci summit didn’t happen, it served as a wake-up call for the EU. Having realised that it must up its efforts to reclaim its leadership role, Germany and France organised a ‘virtual summit’ between Prime Minister Hoti and President Vucic for July 10, while the EU-mediated dialogue will resume with a meeting in Brussels on July 12.

That the EU is now apparently keen to play a more proactive role has been welcomed by many, including Grenell. Yet, when thinking about Kosovo’s future relationship with the EU, it is important to reflect honestly on the EU’s engagement with Kosovo to date, and – to avoid seeing the EU as a panacea – ask a number of key questions:

Does the EU want Kosovo to join?

The EU has proved adept at making promises to Kosovo, but not at fulfilling them. The Zagreb summit declaration in May was billed as proof of the EU’s reinvigorated commitment to the Western Balkans, but for all its grandiose rhetoric, it was inherently vague and essentially a restatement of promises made at the 2003 Thessaloniki summit.

This vagueness is no doubt evidence of the fact that EU states are divided on the issue of enlargement – particularly when it comes to Kosovo – and that the European public is increasingly hostile to the idea.

There are undoubtedly many EU officials and member states who do want Kosovo to join, but there is no consensus on this. Many, indeed, remain actively opposed to the idea: Greece, Slovakia, Romania, Cyprus and Spain still consider Kosovo to be a part of Serbia. EU officials should not, therefore, make promises to Kosovo that its member states do not support.

Hostility towards Kosovo is arguably most evident with respect to visa liberalization. Despite repeated assurances that liberalization was imminent and Kosovo meeting the EU’s conditions it has still yet to be granted. The European Council is the current cause of the blockade, which, according to EU Rapporteur for Kosovo Viola von Cramon, is due to French reluctance.

Given other countries with worse internal problems – like Georgia and Ukraine – have been granted visa-free passage into the Schengen zone, why hasn’t Kosovo? The only plausible explanation is that many within the EU do not value or respect Kosovo. They see it in purely negative terms as a source of crime and conflict.

Given the general ‘enlargement fatigue’ and the specific hostility towards Kosovo’s membership, Kosovo must accept that for all the expressions of support, membership is neither guaranteed nor imminent. Kosovo’s accession can be easily stalled given that the EU has mastered the practice of advancing endless lists of criteria that must be fulfilled prior to membership.

Politicians, civil society and the general public should think realistically about the prospects of EU membership and reconsider their policies accordingly. Membership of the EU is a long, long way off for Kosovo and the country cannot afford to shape all of its political endeavours around this one elusive goal.

Has the EU done enough to deal with corruption in Kosovo and support genuinely democratic movements?

There are corrupt people in Kosovo, and in 1999 Kosovo was in a state of near total ruin. But the challenges faced in rebuilding Kosovo could have been met had a different strategy been pursued by international actors with power and influence in the country. Instead, too many of those tasked with overseeing the reconstruction of Kosovo since 1999 have not just tolerated but enabled a corrupt elite with a view to creating ‘stability.’

In fact, this ‘stability’ (rather than progress) continues to be the goal set for Kosovo, and has always been narrowly understood as the absence of violence internally between Kosovo’s communities, and the prevention of cross-border conflict.

The established elite have demonstrated their real interest in Kosovo over the past 20 years through their willingness to bow down and nod their heads when the international community makes a demand. The agreement by the new government to halt its efforts to join international organisations is just the latest in a long line of craven subservience. This is not the behaviour of a sovereign state.

But they have behaved this way because in return, the international community – including the EU – silently agreed to turn a blind eye as they plundered the country. As a result, cronyism and nepotism are rife, and Kosovo is today an archetypal case of state capture.

This has happened despite the EU, the UN and the US engaging in the most invasive statebuilding project ever launched. They had the means and the authority to stop this, but they chose not to.

That the Vetevendosje-led government was recently ousted by the old forces within Kosovo that have degraded its international standing and exploited its resources is hardly a surprise. However, that this happened with the active support of the US and without meaningful censure or condemnation from the EU is a disgrace.

As such, the idea that membership in the EU will somehow ‘clean up’ Kosovo’s political system is a forlorn hope given the EU’s attitude towards corruption in Kosovo to date.

Additionally, the rise of authoritarianism and corruption within EU member states – most notably Poland, Slovakia and Hungary – suggests that the EU’s priorities are less about preserving values and more about keeping its existing members regardless of how far they stray from the EU’s professed ideals.

Has the EU worked to ensure justice for the victims of Serbia’s violence in Kosovo?

One of the most emotive and pressing issues in Kosovo is the quest for justice for the violence committed during the 1990s; the vast majority of Milosevic’s forces that perpetrated crimes against civilians have not been punished.

Few Kosovo Albanians escaped unscathed from the sustained campaign of state-sponsored violence. Thousands were murdered, raped and ‘ethnically cleansed’ not by feral gangs or self-appointed militias, but by the forces of the state.

The Serbian government ordered these crimes be committed, worked to cover them up, and dismissed the victims as liars. Vucic, then Minister for Information – in essence responsible for proliferating pro-regime propaganda – is now President of Serbia. He has praised Milosevic, denied that massacres occurred, and refused to accept responsibility for the bloody violence perpetrated in Serbia’s name.

And yet, despite all this, and the fact that he has steered Serbia back towards authoritarianism whilst orchestrating a campaign to persuade other states to de-recognise Kosovo, he has been lauded by the EU and congratulated on his recent electoral success.

Incredibly, since 1999 the narrative regarding the war has shifted in Serbia’s favour. In its increasingly desperate attempts to keep Serbia away from Russia, the EU has repeatedly overlooked the crimes committed in Kosovo, lest so doing would impact their courtship of Vucic. Kosovo’s thousands of victims and survivors have thus become an inconvenience, something best ignored or bargained away so as to facilitate Serbia’s accession.

Indeed, the EU-facilitated dialogue appeared to be specifically designed to craft a means by which Serbia could contrive some settlement with Kosovo which would enable it – not Kosovo – to join the Union.

It therefore seems that Kosovo’s EU aspirations are contingent upon the country giving up on seeking justice for those whose lives were shattered by Milosevic’s forces. Surely this is not a price worth paying?

Anger at the fact that Kosovo was forced to establish a special court to prosecute crimes committed against Serbs and other minorities over the course of the war will surely only increase if the EU allows Serbia’s government to march towards membership without atoning for its past, while Kosovo remains marginalised.

It would of course be foolhardy to give up on EU membership, but it is surely prudent to think about how Kosovo can exist and prosper outside the EU. Given the array of obstacles that stand in the way of Kosovo’s membership, it must seek to develop the means by which it can make progress independently whilst cultivating productive relations with its neighbours.

Even if EU membership does arrive, it will not guarantee peace, prosperity and the consolidation of democracy. Events within the EU in the last ten years show that the transformative potential of membership has been exaggerated.

Finally, when returning to the dialogue table in Brussels on July 12, Kosovo must robustly resist the increasingly prevalent narrative which seeks to ‘move on’ and focus on the future. This only emboldens Vucic and is a betrayal of the people’s demands for justice.

It is, however, difficult to imagine Prime Minister Hoti – who’s legitimacy to represent Kosovo is itself questionable – behaving in anything but a fawning, deferential fashion when the EU fanfare begins.

This is an edited version of an address given to the South East European Cooperation Process Parliamentary Assembly. The opinions expressed in the opinion section are those of the authors only and do not necessarily reflect the views of BIRN.