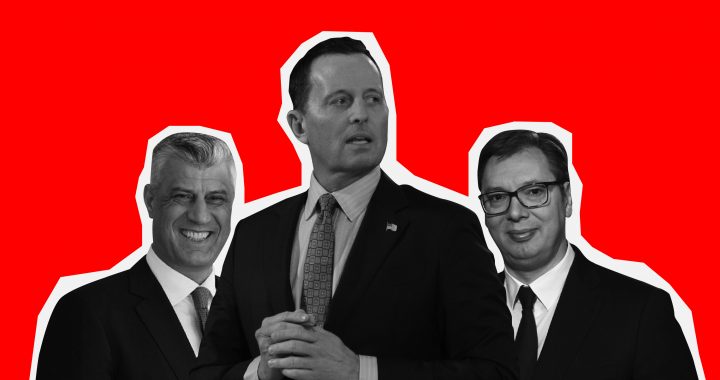 The signing ceremony is on

The Trump administration seems close to achieving its long held goal of concluding a major deal in foreign policy in the shape of some form of agreement between Kosovo and Serbia. But with no strategy outlined and the absence of Europe from the process, it can only do damage.

With a new, prostrate government in Prishtina voted in this month, and the expected completion of elections this Sunday in Serbia, the path towards a Washington-brokered agreement between Kosovo and Serbia is now open. White House emissary Richard Grenell wasted little time in scheduling a high level meeting between representatives of Kosovo and Serbia in Washington for June 27 for, as he put it, “Dialogue discussions.”

In recent months, Grenell has left no stone unturned to ensure that all obstacles to a “historic agreement” were removed. This included applying pressure to the previous coalition government, leading to its collapse, and ensuring that not only the 100 per cent import tariff on Serbian goods, but also reciprocal trade measures were removed.

The tariff issue between Prishtina and Washington created the perception to many in Kosovo that in making a unilateral demand on their leadership, Grenell is doing Serbia’s bidding. This was a difficult pill to swallow for many Kosovar Albanians, since public perception largely views the United States as both their saviour from genocide (given its leadership of the 1999 NATO intervention) and the chief power responsible for Kosovo’s independence (with Washington’s recognition of Kosovo in 2008).

But it is important to take a step back and look at both the current context of US foreign policy and take stock of the diplomatic dynamics that brought Kosovo and Serbia to this point.

Washington has no clear long-term strategy in the Kosovo-Serbia talks and neither Grenell nor his boss, President Donald Trump, have articulated one. What appears more likely is that, after his election, Trump hungered for a major foreign policy achievement to claim on his record before his reelection campaign.

Trump and his team scoured the globe for hotspots that could be turned into quick “deals.” In due course, there emerged a division of labour of sorts in his administration.

Key figures appear to have been assigned important foreign policy tasks: US Trade Representative Robert Lighthizer was tasked with making a “great” new trade deal with China, State Department chief Mike Pompeo was tasked with engaging Iran, Trump’s son-in-law Jared Kushner was tasked with preparing a solution to the Israeli-Palestinian conflict, while another loyalist, Grenell (at the time US ambassador to Germany) was assigned the Kosovo-Serbia portfolio. In the meantime Trump personally meddled in North Korea.

In each case the administration relied on the same tactic – escalate, threaten, and then offer to make a “deal.” The strategy failed consistently. In no case was Trump able to score his “deal.”

The Grenell portfolio, however, proved different. Unlike the other cases, in Kosovo and Serbia both presidents, Hashim Thaci of Kosovo, and Aleksandar Vucic of Serbia, were willing to go along with Washington’s plans.

The two had already been negotiating for years under the umbrella of the EU. Under EU mediation, the two countries have signed a number of “technical agreements” since 2011, regarding issues such as the mutual recognition of license plates and diplomas and administering border checkpoints. All it took was for Grenell to hijack the existing EU process by promising an agreement that would provide better and quicker “deliverables” to the parties compared to the slow-paced and highly bureaucratic EU process.

Thaci has been very vocal in noting that in spite of Kosovo’s participation in EU-sponsored negotiations, the EU has for nearly a decade now failed to deliver on its promise of visa liberalization for the country. In Kosovo, frustration with the EU is real, and is one that Grenell has happily picked up on.

For Serbia, on the other hand, a US-brokered, fast-track deal with Kosovo would actually aid its accession process into the EU. Improving relations with Kosovo is one of the conditions which Brussels has placed on Belgrade as a key criterion for admission. Vucic has also expressed strong interest in improving relations with the US, including ceding to a demand to no longer purchase Russian military equipment. In that sense, in working with Washington, Serbia has little to lose and much to gain.

The pushback seemed to catch Thaci by surprise, and he has done much to obfuscate his previous support for border revisions. On the other side, Vucic has argued that only under such a grand bargain, in which “Serbia gets something” (i.e., territory), would he possibly make the concession to recognize the remainder of Kosovo as sovereign.

Vucic’s public messaging on that issue has been carefully worded but remarkably consistent. More recently, he has indicated that the prospects of such a “grand bargain” appear slim, and has reiterated his position that Belgrade will not recognize Kosovo. In light of Thaci’s own statement this week excluding the possibility of border revisions, it would be surprising if a land swap is still on the table. It also means that Serbia’s recognition of Kosovo will not be a likely outcome.

Saved from the debacle which the territory issue could have led the talks to, the last few months have been spent by the parties on regaining momentum, revising the agenda, and engaging in what political scientists call acts of signaling as a prelude to a larger agreement. This includes the signing of the January ‘agreements’ on air and rail transport between Prishtina and Belgrade, followed by subsequent visits by both Thaci and Vucic to Washington.

The symbolic purposes of those agreements vastly outweighs their political importance. They served to signal the parties’ seriousness in the dialogue to Grenell and to each other, to signal to the EU that it is effectively excluded from the process, and for Thaci to signal his ability to deliver politically beyond his legal and constitutional mandate (constitutionally, the Kosovo president is a figurehead with no executive authority).

The reciprocity affair can also be understood in the context of that signaling game – in this case, by Grenell to Belgrade, that Prishtina is fully under his influence and will implement whatever is demanded of it by Washington. Once Belgrade received its message, everything was in place.

Which brings us to the planned June 27 meeting. Unlike the history of US-brokered Kosovo-Serbia talks, which date back to the 1990s, this time the public is entirely in the dark regarding not only the contents, but also the framework of negotiations and its general principles. In addition, unlike past talks, these entirely exclude meaningful involvement by America’s key European allies.

It is obvious that an agreement has been in the making for months, since it is unlikely that such a complex agreement will be negotiated over an afternoon coffee at the White House. The agreement may not include territorial revisions, but then again, the negotiations are secret and what is revealed at the end may be a surprise.

Its substance may consist of meaningful commitments by Serbia, perhaps falling short of recognition, but including a promise to not block Kosovo’s membership at the United Nations and other international organizations. Or it may consist of a host of technical agreements on trade, travel, and investment between the two countries, most of which will change little in the lives of people in the region.

Regardless, it appears that Grenell will have finally delivered his boss’s own much coveted Rose Garden peace signing ceremony. Behind the making of that optic will lie a lot of costly political wreckage.

Besnik Pula is an Associate Professor of Political Science at Virginia Tech. He has authored a number of studies on Kosovo’s politics and has been since the 1990s involved in Kosovo issues as a member of the Albanian-American community. The views expressed here are personal and do not reflect those of the author’s institution.