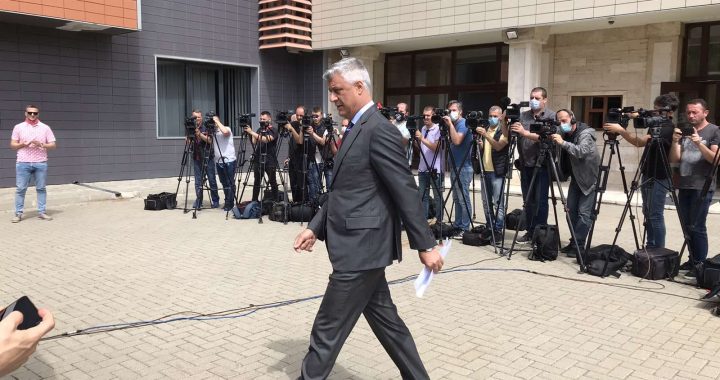 Thaci: No one seeking to violate Kosovo’s territorial integrity

President Hashim Thaci has told the press that he hopes a meeting at the White House on 27 June will successfully conclude discussions between Kosovo and Serbia, and ruled out any discussions on exchanging territories.

In a press conference on Tuesday morning, Kosovo President Hashim Thaci expressed hope that a meeting in the White House on June 27 will lead to a successful resolution of discussions between Kosovo and Serbia. “Washington has made it clear that this is a process for a reciprocal recognition and membership in international organisations, in particular the United Nations,” he added.

The president also described suggestions that an exchange of territories would be part of an agreement between Kosovo and Serbia as “disinformation.”

“I emphasise that under no circumstances is anyone seeking to violate the territorial integrity of the country, in Washington or anywhere else,” Thaci stated, adding that the Kosovo Constitution will be the foundation of the talks.

The meeting was first announced on Twitter by Richard Grenell, US President Donald Trump’s Special Representative for the Kosovo-Serbia dialogue, on Monday night.

According to Grenell, he has “received the commitment from the governments of Kosovo and Serbia to temporarily pause the derecognition campaign and the seeking of international memberships in order to meet in Washington, DC.”

The envoy described the meeting as “Dialogue discussions,” and added that “if either side is unsatisfied with the June 27 discussions then they will go back to the status quo after they leave Washington.” The Wall Street Journal has reported that the talks will be hosted by Donald Trump.

Since 2011, negotiations between Kosovo and Serbia have been facilitated by the EU through the Brussels-based dialogue, with a successful resolution a condition for both countries’ path to European integration. Asked whether the EU would be present at the talks in Washington, Thaci replied that Kosovo does not decide who will be in the meeting.

The EU’s own Special Representative for the Kosovo-Serbia dialogue, Miroslav Lajcak, is due to arrive in Prishtina on Tuesday, after his travel plans were disrupted on Monday following the cancellation of flights leaving and entering Prishtina. The EU Office in Kosovo told Radio Free Europe that Lajcak will announce the date of the restart of the EU-mediated dialogue during his trip to Prishtina.

Asked whether he will meet with the EU representative, Thaci said that he will meet Lajcak only if there is something “concrete” for them to discuss.

“If he is coming to Kosovo just to research the terrain, then it is not necessary to hold a meeting,” Thaci said. “Lajcak should be clear and explain what the EU’s position on visa liberalisation for Kosovars is. This is what we need more than endless lectures.”

Lajcak is set to meet Speaker of the Kosovo Assembly Vjosa Osmani and Prime Minister Avdullah Hoti on Tuesday. Hoti also hailed Grenell’s announcement of the Washington meeting, stating that coordination with Kosovo’s international partners, and Grenell in particular, has “yielded the first results, prompting Serbia to halt its derecognition campaign.”

However, Osmani has been more sceptical over whether Serbia has stopped the campaign, highlighting Serbian foreign minister Ivica Dacic’s thanking of Algeria for their “principled position on Kosovo” in a tweet on Tuesday.

“Haven’t they agreed to stop this nonsense,” Osmani said. “This is the true face of Serbia, friends: on Monday, they promise the U.S. to stop the campaign. On Tuesday, they resume it.”