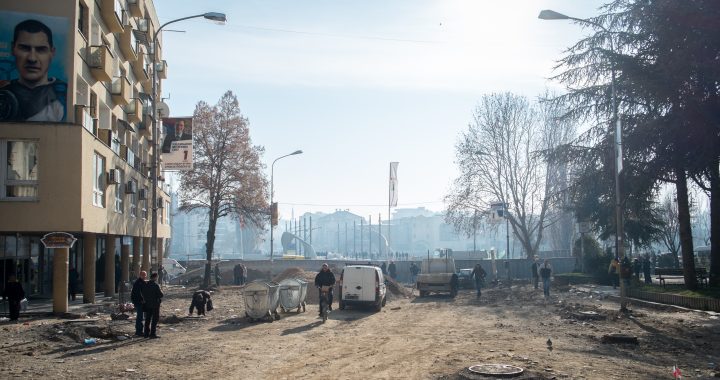 A week after construction began on a wall-like structure in northern Mitrovica, the EU says there will be a staircase on it on both sides pursuant to a new agreement.

“There will be no wall,” European Union Special Representative Nataliya Apostolova told Prishtina Insight in a statement. “The parties agreed there will be a stairway that will ensure on one hand a freedom of movement, and on the other the road safety.”

Prishtina and the European Union have sought for years to resume vehicular traffic on the steel bridge over the Ibar River separating the northern, predominantly Serb and southern, predominantly Albanian parts of the city. Kosovo and Serbia agreed to reopen the bridge for cars and to pedestrianize the street directly ahead of it, Krajla Petra, according to a design agreed upon in June 2015. Though the construction was to be concluded by summer 2016, the bridge is now set to open on January 20, 2017.

“The EU is very closely following the implementation of this understanding. I urge both parties to swiftly implement what was agreed as any unnecessary delay will create uncertainty among people on both sides of the bridge,” Apostolova said.

While the EU has overseen the redesign of the bridge and the traffic circle necessitated by three-way traffic, the design and funding of the pedestrian zone on Krajla Petra is Serbia’s responsibility, north Mitrovica mayor Goran Rakic told PI.

The whole thing will be redesigned according to an agreement reached on Friday, Rakic said, with stairs on both sides along the whole barrier at a height of 80 to 90 centimeters. Once the new design is ready, Rakic said it would be released for the public.

The news comes as the EU certified that both sides met their commitments to the November 30 agreement on forming a unified judiciary for northern Kosovo, another key objective of the 19 April 2013 ‘normalisation’ agreement. On 9 December Serbia announced that it had terminated the employment of its judges, prosecutors and administrative staff, which will come into effect on 10 January 2017, allowing for their integration into the Kosovo Judiciary.

On the same day Kosovo will appoint judges, prosecutors and administrative staff to fill new positions.

“The European Union commends the parties for this important achievement,” a spokesperson said in a statement.