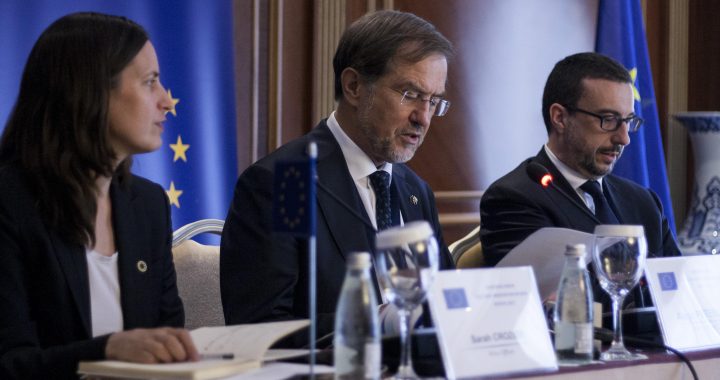 Chief Observer Peterle during a press conference in Prishtina. | Photo: EOM in Kosovo.

The Chief Observer of the EU Election Observation Mission, Alojz Peterle, urged parties to restrain from intimidation tactics and imposing conditions on media.

In a statement issued on Monday, Chief Observer Alojz Peterle said that he met with election stakeholders and urged them to “show democratic maturity” during his trip to Kosovo.

Peterle, an EU MP from Slovenia, is heading the European Union Election Observation Mission in Kosovo following an invitation from the Kosovo President. Peterle visited Prishtina last week, ahead of the June 11 general elections.

“Any intimidation of candidates and their families is wholly unacceptable. The right to stand as a candidate and to campaign freely are absolute prerequisites for democratic elections,” the statement reads, urging the police and prosecutors to investigate incidents.

The PAN coalition parties, the Democratic Party of Kosovo, PDK, the Alliance for the Future of Kosovo, AAK, and NISMA have demanded to be considered as separate political entities in debates–a request considered both unfair and illegal by journalists and the independent media commission.

“The media plays an essential role in fostering the public debate on the different political alternatives,” wrote Peterle. “Reported attempts by political parties to interfere and impose conditions on access to election debates are resulting in difficulties for media in organising fair and inclusive debates in line with the law, to the detriment of the electorate.”

“It is not too late to reverse these negative trends, which risk tainting the entire election process. Kosovo’s voters deserve better,” he continued, adding that it was crucial for political parties to show that they are willing to meet democratic standards. “This is a matter of collective responsibility. Kosovo’s political parties’ leaders must rise to this challenge.”