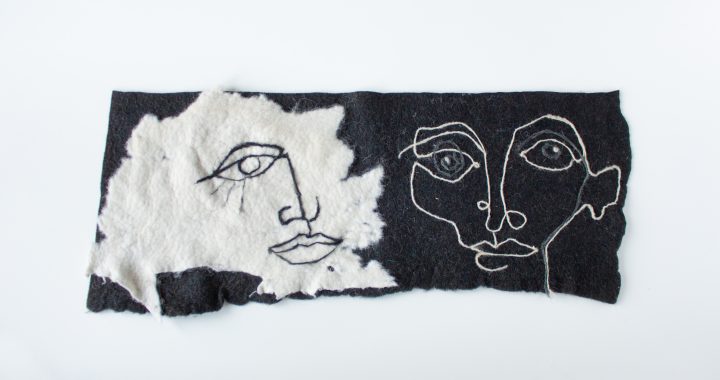 Exhibition weaves new narratives into the art of plis making

Repurposing the traditional craft of making the plis, artist Fitore Berisha’s exhibition ‘Cohe,’ which opens on Monday at Kosovo’s National Museum, celebrates the role of women in the craft with a new take on this cornerstone of Kosovo’s cultural heritage.

The role of the qeleshepunues, or plis maker, is known for being taken on by men alone. A centuries-old tradition, these wool-craftsmen would mold and bleach by hand the Albanian plis, one of the main elements of Albanian traditional dress and a symbol of national identity.

However, according to Kosovo artist Fitore Berisha, behind every great qeleshepunues was a woman doing the real dirty work, and her new exhibition ‘Cohe’ – the name of the soft wool that is molded into thread to craft the round, white hats – aims to put those women in the spotlight.

“When a man wears the plis, he is considered respectful, he has an honorable reputation in his village and an air of superiority,” Berisha tells Prishtina Insight before the opening of her exhibition. “But behind all this is the woman who takes the wool, cleans it, and processes it into thread. The women’s important role in making the plis is rarely mentioned.”

‘Cohe’ opens at the National Museum of Kosovo on Monday evening at 19:00 and aims to take the wool crafting process behind creating the plis and find new ways to engage with and celebrate this staple of Kosovo’s cultural heritage.

“It is about promoting artists and their ideas to combine or reinvent aspects of our heritage in order to bring it back into our lives,” the artist explains.

Berisha, who is known for her iconic and unique public murals around Prishtina, decided to learn the craft of making the plis from scratch, and reached out to one of the last known qeleshepunues in Peja to teach her. “I went to Peja to find a man who would teach me the process. I was there for two months observing him, and then I would try to learn it by myself,” she says.

The process behind plis making, known as felting, involves creating threads using raw wool fiber, an arduous task that requires hot water, soap and long needles to shred the fibers and felt them together to make thread before it can be shaped, bleached and set. It is a challenging and primitive method, taking days to complete a single plis, Berisha says.

This may explain why the craft is dying out. According to Berisha, there are only two or three people left that continue to make the plis by hand.

Rather than making a plis herself, Berisha decided to repurpose this process. She experimented with wool and dye to create sculptures, collages, tapestries, hats, lampshades and even dresses, incorporating her own unique style into the wool-crafting process.

Berisha is glad that women in Kosovo now have the space for such artistic expression, and explained that her project was born out of frustration at the lack of opportunities to celebrate women’s contributions to Kosovo’s cultural heritage.

”After marriage, women were expected to bring suitcases of things made by hand, carpets, cushions, tapestries. I decided to center everything [shown in my exhibition] around the woman.”

Repurposing such a symbolic and male-centered craft is the ideal artistic response to bolster Kosovo’s growing gender equality, she says, one that simultaneously respects the traditional craft and finds new ways for a more tolerant society to enjoy it.

“For centuries, patriarchy has caused us to stagnate both culturally and intellectually, for women in particular,” says Berisha. Now, there are so many more opportunities for us.”

‘Cohe’ opens at 19:00 at the National Museum of Kosovo. The pieces on show will be available to purchase. For more information, check out the exhibition’s Facebook event.