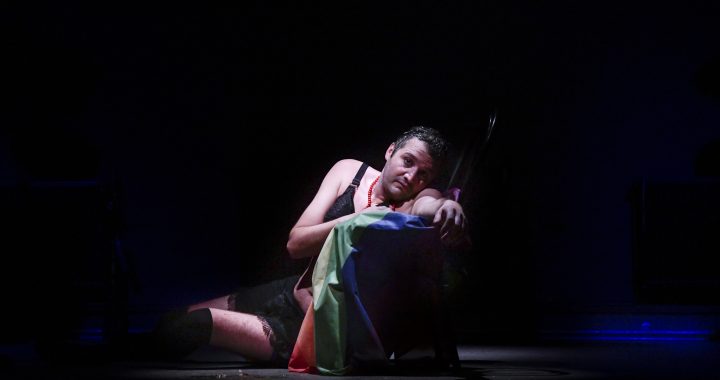 Adrian Morina as Charlotte von Mahlsdorf in 'I am my own wife.' Photo: Atdhe Mulla.

A new adaptation of ‘I am my own wife’ by director Kushtrim Koliqi explores gender and identity issues in Kosovo through the eyes of Charlotte von Mahlsdorf, a transgender spy who lived in Communist East Germany.

‘Une jam vete grua’, or ‘I am my own wife’, a play adapted by theater director Kushtrim Koliqi and starring Adrian Morina, completed a second run at the Dodona Theater in Prishtina this week, with plans to now take it to other cities in Kosovo and across Europe and the Balkans.

The play was originally written by playwright Doug Wright in 2002, and is based on a series of interviews conducted in the early 1990s with Charlotte von Mahlsdorf, a transgender woman who was a staple of LGBTI+ society in East Berlin, and a confirmed collaborator with the German secret police.

“Her life is not black and white, she has a lot of shadows – which is how it should be, we are all human,” says Koliqi to Prishtina Insight. “Charlotte’s is a breathtaking and unique tale of survival.”

Charlotte’s story is told through an explosive hour-long performance from actor Adrian Morina, in which he plays all 30 characters, from Charlotte’s father, aunt, and lover, to the playwright himself, Charlotte’s friends, Nazi soldiers and Stasi officers. The characters appear back-to-back, and sometimes three at a time.

The play was adapted for an Albanian audience from the English/German original which premiered in Chicago in 2004, winning a Pulitzer Prize and a Tony award for Best Play the following year. According to Koliqi, it was Morina that inspired him to adapt the play.

“I chose this piece because of how it criticizes modern society using the issues raised through Charlotte’s life,” Koliqi explains. “It was Adrian that first approached me with this play. We both thought it was a masterpiece, this monodrama with 30 different characters. So I adapted it, I took the parts that are relevant to Kosovo society and the Kosovo context and wrote in my own parts as well to better contextualise it.”

The play deals with Charlotte’s coming of age story, her experience of the war and her life fighting for survival at a time when transgender people were misunderstood, jeered at, assaulted and exploited. According to Koliqi, for a Kosovo audience, Charlotte’s story is more relevant than ever.

“This was not an easy play to adapt given the mindset of Kosovo’s theater scene and its society,” says Koliqi, explaining that he was apprehensive of how Kosovo audiences would receive the play. “For me this was an ideal time to tackle this issue. People are not aware of transgender issues, it’s a conversation we don’t have in Kosovo.”

‘I am my own wife’ is not only shocking because of the issues of gender and identity that it reflects on. Charlotte’s life was tumultuous: from dealing with an abusive father that she kills as a teenager and suffering sexual violence at the hands of the Nazis to opening a secret gay bar under the nose of the Stasi.

Koliqi uses this seemingly historically and geographically distant subject matter to hit home on the struggles faced by one of Kosovo’s most invisible minorities.

“This kind of piece gives me the potential to send some strong messages, radical messages towards different parts of society, when it comes to issues of the past and in particular the human rights, or lack thereof, of the LGBTI+ community,” Koliqi explains. “We didn’t want to tackle this in a superficial manner, and we didn’t limit ourselves in terms of context or the mentality of society or our family values, we just followed our guts and intuition.”

‘I am my own wife’ infuses comedy and tragedy beautifully, moving swiftly between hilariously told and touching stories of romance and family to Charlotte’s abuse at the hands of public authorities and anger at her lack of acceptance in mainstream society, ending with her death in 2002.

Koliqi says finding the right kind of actor for this play could have been an incredibly difficult process if he did not have Morina ready and willing to take on the role. Other international productions have been criticized for failing to cast a transgender woman as the role of Charlotte, despite the playwright, Doug Wright, intending the role of Charlotte to be played by a man.

This was not possible for Koliqi: not only does Kosovo lack actors that would be open-minded enough to play a transgender character, he says, there are no transgender performers to choose from in the country. “This is such a complex role, and to play it right, the actor needs intelligence, talent, and courage,” says Koliqi. “All of those characteristics I found in Adrian. We knew we would get criticized for a play like this, and we were, but we don’t care.”

After receiving standing ovations every night of its run in Prishtina, Koliqi intends to tour the play around other theaters in Kosovo, and then to take it around the Balkans and to various international theater festivals in Europe. The director is showing the play in towns outside Prishtina “just to see their reaction,” he says, expecting that it may not be as well received elsewhere as it was in Prishtina, but intent on spreading the message of the play as widely as possible.

“This show really has no gray zone,” Koliqi says. “Either we win big time or we lose big time. But we are a group of people that care about aesthetic expression as well as political and social matters in Kosovo, and I think we’ve shown a lot of courage putting this on.”