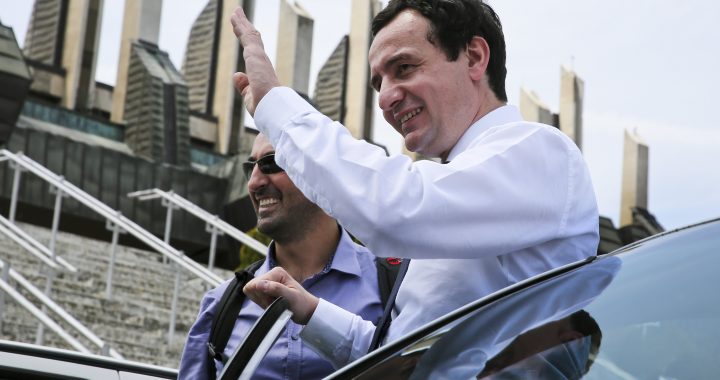 In this Wednesday, June 7, 2017 photo, Albin Kurti, prime minister candidate of Kosovo's opposition party Vetevendosje, or The Self-Determination Movement, waves during an electoral campaign in Kosovo capital Pristina. Kosovars go to the polls on Sunday to choose the new 120-seat parliament that will have to deal with the thorny issue of the border demarcation deal with Montenegro and potential war crimes trials of some of its most senior political leaders. (AP Photo/Visar Kryeziu)

Despite having failed to reach a coalition agreement that would secure his majority, Vetevendosje leader Albin Kurti has decided to hold a vote at the Kosovo Assembly to approve his new cabinet on Monday.

Albin Kurti, leader of Vetevendosje, the party that came first in the October snap elections and who has received a mandate to form the new government, will present his cabinet to the Kosovo Assembly for a vote on Monday.

The Chairmanship of Kosovo Assembly on Thursday confirmed Kurti’s request for the Assembly session to be held on February 3.

Despite not having reached an agreement on a coalition with the second-biggest party, the Democratic League of Kosovo, LDK, Kurti requested a vote on his new government next Monday in a letter to Assembly Speaker Glauk Konjufca.

The LDK leader, Isa Mustafa, confirmed on Thursday to TV station RTV21 that the LDK would vote for a Vetevendosje minority government even if no coalition deal was reached. But he warned that despite the LDK’s promise to vote for a Vetevendosje-led minority government, he could not be certain that all 28 LDK MPs would “raise their hands” in favour.

Political analyst Blerim Vela told BIRN that a minority government would clearly not be stable, as Kurti would need to constantly lobby other parties to pass any legislation.

Meanwhile, both parties continue claiming that a coalition deal remains possible. Mustafa said on Thursday night that the LDK “were and are still willing to form a coalition with Vetevendosje.”

On Thursday, Kurti also met representatives of ethnic minority parties, including  Lista Srpska, adding to the confusion, as Kurti had previously claimed his government would never include Lista Srpska.

Kurti has insisted that a government will be formed without Lista Srpska and that the Serbian community minister will be chosen from outside this party. The Kosovo Constitution requires two ministers to come from minority communities in a 12-ministry government.

Vetevendosje insisted that the meeting with the minority communities was necessary in order to discuss the governing platform and how it would affect the communities.

Coalition negotiations remain deadlocked mainly over the LDK demand to hold the post of AssemblySpeaker temporarily until a new president has been elected from its ranks. However, Konjufca has already taken over the position of Speaker of the Assembly, having been elected to the post on December 26.

If Kurti’s new government does not get a majority of votes on Monday, President Hashim Thaci must hand the mandate to another person within 10 days. In this case, the new candidate for prime minister will have 15 days to present a new government to parliament.