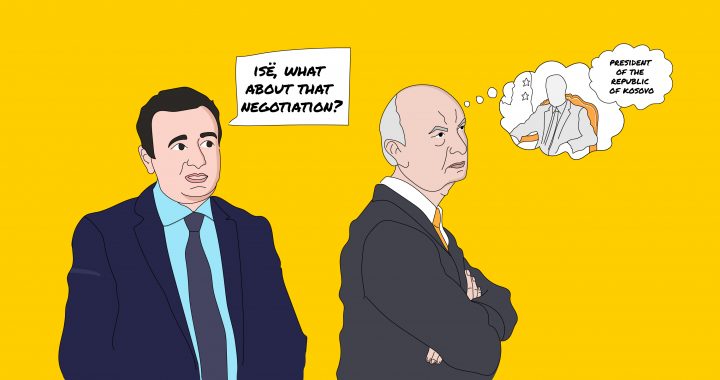 Negotiations to form a coalition government between Vetevendosje and LDK have turned into a fixation over positions of power rather than principles, eroding much of the hope built up by October’s election results.

Despite the fact that two former opposition parties, Vetevendosje and the Democratic League of Kosovo, LDK, won the majority of votes and immediately pledged to form a coalition government, an endless negotiation process has halted the transition of power and deepened political divisions in Kosovo.

In a normal post-electoral process, the first 100 days serve as a test for the new government to carry out reforms and enact its governing plans.

However, in the more than three months since election day in Kosovo, the political discourse has been entirely centered on the stipulations required to be met in order to reach a final coalition agreement between Vetevendosje and LDK, with the focus on positions rather than principles.

It would be more understandable to the electorate if the cause of the standstill was a dispute over economic or rule of law reforms, or other fundamental policy issues that would naturally polarize the parties, taking into account the ideological differences between the two.

Strangely, this appears to have been the easy part. It was confirmed by both camps that a governing plan was swiftly agreed upon after numerous meetings to harmonize the two parties’ programs. Instead, the blockade has been caused by a fight over how exactly to divide the spoils of government.

The tone was set early on. Although both parties agreed to a coalition, LDK insisted on waiting for the results to be certified before signing any formal agreement, waiting for confirmation of their exact power within the Assembly.

By the time the results were finally certified by the Central Election Commission at the end of November, the stumbling point in the negotiations had become discussions over the appointment of the next Kosovo President. LDK leader Isa Mustafa stated that it was crucial to discuss the issue now, while Vetevendosje wished to delay the discussions, with the president not set to be selected by the Kosovo Assembly until 2021.

The fate of the next president was not listed as a priority by LDK during the election campaign, and the party’s persistence in pushing a candidate from within its own ranks demonstrates the narrow self-interest of its leadership. It is now clear that accommodating key figures in powerful positions is more important than any of the party’s campaign promises to rid the country of the corrupt and nepotistic practices of the previous government.

It is also disheartening to see LDK’s so-called ‘new generation’ embracing this politics of greed from its old guard. Younger members dominate the list of LDK’s most voted for candidates in the October 6 election, with Vjosa Osmani, Lumir Abdixhiku, Driton Selmanaj, Arban Abrashi and Besian Mustafa all among the top 10.

But it is LDK’s old guard, senior figures including Isa Mustafa, Lutfi Haziri and Agim Veliu – none of whom stood for election to the Kosovo Assembly in October – that have seemingly dictated negotiations and allowed the blockade over the presidency to form, with the ‘new generation’ largely sidelined or muted.

The hypocrisy of such silence is blatant when taking into account that LDK’s prime ministerial candidate Vjosa Osmani herself argued against using the position of president as part of “political bargaining” during the election campaign.

LDK’s refusal to reveal the name of the candidate to be put forward for the presidency further exhibits the lack of transparency in Kosovo’s oldest party, while their insistence on nominating a candidate shows a lack of will to make real change with half of the government in their hands.

A compromise too far?

Naturally, as the most voted party at the election, Vetevendosje cannot be absolved of responsibility for the failure to materialize the hoped-for change, with pressure to form the next government increasing.

If the party compromises with a deal backing an LDK-nominated candidate for president, its reputation as a party separate from the corrupt orthodoxy of Kosovo politics will fade, potentially denting its future hopes with the electorate. It will also question the veracity of Vetevendosje’s proclaimed desire for a “unifying” candidate for president, while the party leader ordering his deputies to support an LDK nomination for president risks falling into the logic of authoritarianism.

However, failure to reach a deal will almost certainly result in a second snap election, plunging Kosovo ever deeper into political crisis. A potential third option, searching for other governing partners from the former PAN coalition, remains only theoretical. It has been strongly opposed by Vetevendosje officials, and would be a potentially suicidal political move.

The pressure to find solutions has already led to compromises in the party’s promises for the next government. In the election campaign, the party signed up to a promise to cut the number of ministries in order to tackle nepotism and reduce public spending. However, on Tuesday night, a new proposal from Vetevendosje was publicized, containing the offer of an extra minister to LDK by expanding the number of ministries from 12 to 14.

In a letter sent to Mustafa outlining the proposal, Vetevendosje leader Albin Kurti stated that he will be “attacked” by the public for this compromise, and not being able to keep the electoral promise of 12 ministries.

Such a maneuver from Vetevendosje can cost the party dearly, as it always branded itself as a party of principles that would not make concessions against the public interest. Satisfying a coalition partner by adding two more ministries and selling it as a silver bullet to overcome the crisis is no different logic from what we have seen from previous governments.

LDK has seen them in government three times over the past 20 years, and a legitimate question for Veliu, who has been part of the party’s decision making structures throughout those mandates, stands: “How much progress has Kosovo made towards European integration to be fearful of being derailed from that path?”

Such an absurd response seem to have created dissatisfaction even among Veliu’s colleagues. In response to his claims, Vjosa Osmani reminded Veliu of LDK’s cooperation with Vetevendosje in fighting against the previous government’s attempts to abolish the Specialist Chambers in the Hague, “saving Kosovo’s pro-western orientation.”

But while Vetevendosje has already shown willingness to compromise on certain election promises, one thing they remain inflexible on is the position of Speaker of the Kosovo Assembly.

The two parties reportedly came to a verbal agreement promising the position to a representative of LDK. However, with talks deadlocked, Vetevendosje’s Glauk Konjufca was elected to the position on December 26, a process Vetevendosje have since described as “irreversible” as talks with LDK continued.

A long road ahead

At the same time this nonsensical debate over the division of power continues, PAN’s governance has not stopped from that with which it has become synonymous: abuse of power.

Earlier this week it was reported that NISMA’s Blendi Kilaj was appointed as General Consul for Ljubljana despite the fact that the Consulate in Ljubljana is no longer operational. It was an escape from these stories of such flagrant nepotism and abuse of the public purse that October’s election results offered hope for.

While Vetevendosje and LDK might eventually agree to cohabit in power, these 100 days have cemented a longstanding distrust between the parties, and is not building a solid foundation for co-governance. Kosovo has already seen a number of coalition governments that worked against each other rather than alongside one another, and fears this may be repeated can only grow as negotiations over an agreement extend further into 2020.

In the past 100 days, both LDK and Vetevendosje have diminished the sense of hope for change that both promoted during last year’s election campaign, and reviving it will be an uphill battle in the existing atmosphere of mistrust.