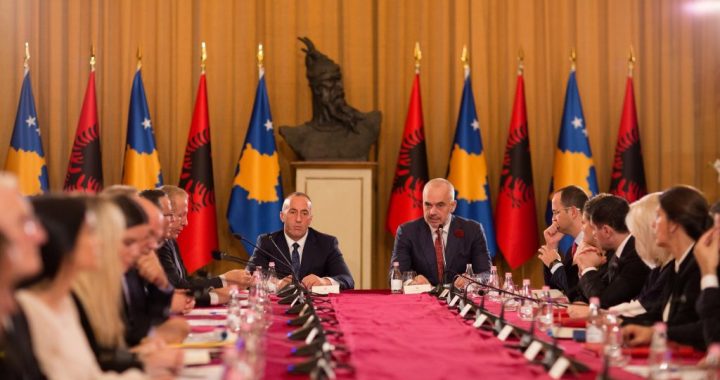 Albanian Prime Minister Edi Rama submitted a defamation lawsuit to the Prishtina Basic Court on Wednesday, claiming that Ramush Haradinaj made defamatory and misleading statements to the media linking Rama with the infamous ‘land swap deal’ between Kosovo and Serbia.

Albanian Prime Minister Edi Rama filed a defamation lawsuit on Wednesday against outgoing Prime Minister of Kosovo, Ramush Haradinaj, at the Basic Court of Prishtina, seeking damages over allegations of defamation. The lawsuit refers to a number of comments made by Haradinaj linking Rama with a plan to exchange territory between Kosovo and Serbia.

Haradinaj labeled Rama’s claim as “unfounded,” and said that he plans to submit a response to the court in due course. “Prime Minister Rama’s lawsuit is completely unfounded and is a political diversion made by him to hide behind media dramas and to evade responsibility,” he said on Facebook on Wednesday.

The lawsuit claims that Haradinaj made “defamatory and misleading” statements to various media organizations in October 2019 that caused harm to Rama’s honor, dignity and reputation.  According to Kosovo media outlet Oath of Justice, the lawsuit references two media appearances made by Haradinaj in October in which he accuses Rama of being involved in proposals to exchange territories.

“The proposal for the division of Kosovo came from Serbia, but it was approved by Albanians, as well as, unfortunately, Albania’s prime minister, and the Kosovo President,” Haradinaj said on TV Ora’s 360 Degrees program on October 17.

On October 29, Haradinaj once again alleged that Rama played a role in land swap negotiations. “I am strongly opposed to the idea of dividing my country, Kosovo. It should be in the interest of all Albanians that Kosovo is not divided. I was and am against such projects, which even Prime Minister Rama has participated in… with President Thaci,” he said for T7’s Pressing program.

The lawsuit alleges that Haradinaj continued to repeat this stance, despite Rama, according to the lawsuit, never discussing such topics. “The Prime Minister of the Republic of Albania has no formal and legal-political role in the eventual agreement between the Republic of Kosovo and Serbia,” the lawsuit reads.

Rama announced in October that he was planning to file a lawsuit against Haradinaj for his “unscrupulous lies” concerning Rama’s role in the affair, after Haradinaj claimed in September that he, Vucic and Thaci were “the originators of the plan to partition Kosovo,” and planned to resolve the issue of the ownership of the Trepca mine in northern Kosovo, using the territorial swaps between Kosovo and Serbia as a cover for splitting 10 billion euros in profits that could be made over the next 20 years from the mine’s operation.

“Haradinaj needs to prove his accusation that 10 billion euros is to be split across the table between me, Hashim Thaci and Serbia’s president in the Kosovo courts,” Rama said in October, alleging that Haradinaj only made these claims in order to secure votes for himself in Kosovo’s parliamentary elections.

Tension between Haradinaj and Rama has been common in recent months. In December, Haradinaj criticized the “mini-Schengen” initiative being forged by Serbia, Albania, Montenegro and North Macedonia, describing it as a way to bypass the customs tariff imposed by his government on Serbian goods. Rama responded by labelling Haradinaj “ignorant” and “a liar.”