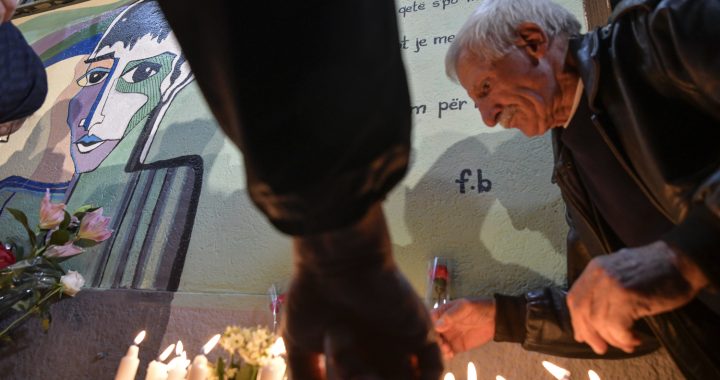 Former police director Nexhmi Krasniqi was interviewed by the Kosovo Special Prosecution on Thursday following the reopening of the case investigating the death of Astrit Dehari, while Dehari’s former cellmate Adonis Gashi, also expected to be interviewed, has reportedly gone missing.

Nexhmi Krasniqi, the Kosovo Police Director in Prizren at the time of Astrit Dehari’s death, was questioned on Thursday by the Kosovo Special Prosecution as part of the investigation into the circumstances surrounding the death of the Vetevendosje activist in November 2016.

At the time of Dehari’s death, Krasniqi told BIRN that the activist, who was being detained at Prizren Detention Center on suspicion of attacking the Kosovo Assembly building, took medication and fell into a coma. Subsequent autopsy reports declared that the cause of death was self-inflicted asphyxiation, and the conflicting information and unclear circumstances surrounding Dehari’s death resulted in a series of public protests demanding an independent investigation.

The case was reopened by the Basic Prosecution in Prizren on October 24, 2019, following the publication of a report from University Center of Legal Medicine in Lausanne, with the case transferred to Kosovo Special Prosecution one week later to expedite the process.

During Krasniqi’s questioning by the Special Prosecution on Thursday, the attorney representing the Dehari family, Tome Gashi, was present. Gashi informed the media that Krasniqi confirmed he had made the statement regarding Dehari’s cause of death to former BIRN journalist Petrit Kryeziu, and claimed the information was given to him by the director of the Prizren Detention Center at the time, Destan Zogaj.

Meanwhile, BIRN reported on Wednesday that Adonis Gashi, one of Dehari’s former cellmates in Prizren who is also expected to be questioned by the Special Prosecution, is being sought by the authorities.

Gashi was not in custody while awaiting a final verdict from the Court of Appeals regarding a case involving the murder of policeman Shemsedin Gashi, in which he was convicted for the crime of incitement to murder in November 2018. The court reached a final decision in May 2019, but, according to BIRN sources, Gashi did not respond to his summons to serve an extended sentence of eight years, and an arrest warrant has since been issued.

Albulena Haxhiu, a four-time elected MP of Vetevendosje and the proposed candidate for the next Minister of Justice, reacted to the news of Gashi’s disappearance in a social media post. “Undoubtedly, this news was another shock for all of us demanding justice for Astrit,” said Haxhiu.

Another individual imprisoned alongside Dehari at the time of his death, Naser Makolli, died in custody while at the Lipjan Family Medicine Center for treatment in April 2017, but no further details were released following the announcement of his death.

Makolli was reported to have been the first person to enter Dehari’s cell after he died, and was described as a “key witness” in the Dehari case after Makolli’s death by then-officials of Vetevendosje, including Prishtina mayor Shpend Ahmeti and former MP Fisnik Ismaili. Both Makolli’s family and the protestors that demonstrated in front of the Kosovo Special Prosecution Office in November 2019 on the third anniversary of Dehari’s death demanded further investigation into Makolli’s case as well as Dehari’s.