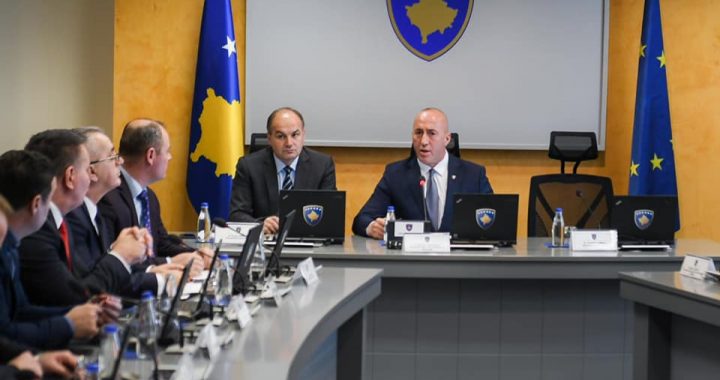 Outgoing Government allocates €250,000 to the fight against ISIS

A payment of 250,000 euros to the Global Coalition against ISIS from Kosovo’s reserve fund was approved by a meeting of the outgoing government on Friday.

A decision to allocate 250,000 euros to the Global Coalition against ISIS was approved at an official meeting of the outgoing government held on Friday. Outgoing Prime Minister Ramush Haradinaj told a press conference that followed the meeting that the payment was a duty for Kosovo in its role as part of the organization.

“Being part of this coalition we have our obligations,” Haradinaj said. “Kosovo is ready to fulfil its obligations through its military, police, intelligence and other aspects. Today we have conducted only the financial obligation.”

Kosovo joined the coalition, which is currently made up of 81 members, in summer 2014. Previous financial contributions include 100,000 dollars in 2017, while, according to Haradinaj, Kosovo contributed 100,000 euros in 2019.

The outgoing prime minister added that Kosovo has been affected by the war in the region, as some citizens have travelled to the Middle East to engage in the conflict. “As a small state we just support the end of this war and will continue to engage in anti-terrorist missions,” he stated.

Since 2012, around 400 Kosovars have joined ISIS, with 110 being flown back to Kosovo on U.S military aircraft following the fall of the group’s last stronghold in 2019. One woman returned to the country, Qendresa Sfishta, was given a two-year suspended sentence for participating in a terrorist group by the Basic Court of Prishtina on Thursday.

Haradinaj stated that financial assistance from the coalition with repatriations mean that Kosovo has received more money than it has put in to the coalition, adding that today’s contribution is still smaller than the cost of paying to return Kosovo’s citizens from the Middle East. “If we talk financially, we are winning,” Haradinaj said.

Despite the Islamic State no longer holding any territory, Haradinaj insisted that “the consequences of ISIS have not finished.”

Skender Perteshi, a researcher at Kosovo Center for Security Studies, a think tank focussing on security matters criticized the decision, stating that the money could be better spent within Kosovo rather than abroad, considering the country’s capacities.

“All activities aimed at preventing and combating violent extremism in Kosovo that have been carried out by civil society and state institutions so far have been done with the support of foreign donors and not from the state budget,” Perteshi told Prishtina Insight.

“It would be more appropriate for the Government of Kosovo to allocate funds for organizing activities that prevent and combat violent extremism in Kosovo, instead of supporting the international coalition against terrorism.” Perteshi added. “This would reduce the number of Kosovo citizens joining terrorist organizations.”

Haradinaj stated that 250,000 euro contribution would be taken from the budget for unforeseen expenses. His outgoing government faced criticism for spending the entirety of Kosovo’s reserve budget in 2019, including two extensions to the budget, bringing the total to 6.1 million euros.