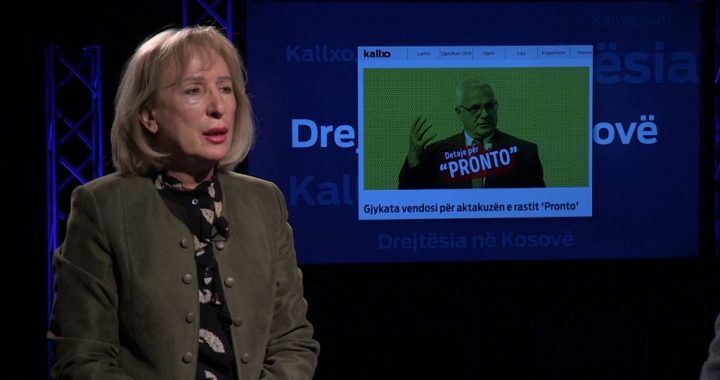 Special Prosecutor Drita Hajdari rejected criticism of her role in the failure of the Pronto case, dismissing accusations that it was ‘built to fail’ in court, and denying that President Thaci and PDK leader Kadri Veseli should also have faced indictment.

Drita Hajdari, the prosecutor leading the investigation into the Pronto affair, has spoken out against the criticism she has faced following the acquittal of those indicted in the case, including that the case was “built to fail” by the prosecution.

The Pronto affair sparked debate at the beginning of January following the announcement that each of the 11 people indicted were acquitted by the Basic Court of Prishtina for alleged crimes that were identified through a series of leaked wiretaps publicized in August 2016.

Among the accused were high-ranking officials of the Democratic Party of Kosovo, PDK,  including co-founder Adem Grabovci, former Minister of European Integration Besim Beqaj, and former MP Zenun Pajaziti. In total, 11 men were accused of being involved in facilitating a number of unlawful appointments of PDK affiliates to senior positions in publicly owned enterprises between October and December 2011, and stood trial on charges of “violating the equal status of citizens and residents of the Republic of Kosovo.”

On January 3, 2020, the judge presiding over the case, Shashivar Hoti, stated that the prosecution failed to prove that a crime had been committed. The court’s decision, including its reasoning for acquittal, is yet to be made public.

During an interview on BIRN’s televised program ‘Drejtesia ne Kosove’ (Justice in Kosovo) on Friday January 10, Hajdari defended her role in the case, expressing disappointment at the decision of the Basic Court but also revealing that she has faced “attacks” from “a number of journalists and members of civil society” for failing to build a strong enough case against the individuals indicted.

“To say that the case was constructed in such a way to deliberately fail? This is not even debatable. This is a lie and disinformation,” she said.  “Immediately after the verdict, servants of the ‘Pronto Clan’ assembled, media servants and some civil society servants, who launched a campaign against the prosecution and against me particularly.”

Without revealing the names of those that she was referring to, Hajdari accused the media and civil society members of indulging in their own personal vendettas against the Kosovo prosecution. “I expected support, and I think I have the support of most of the public. The people I am talking about are luckily in the minority, just four or five people who have their own problems with the prosecution, and me personally,” she said. “They are using this case, this verdict, for personal revenge, but are also in the service of the ‘Pronto clan.’”

Besnik Berisha, the lawyer of the former European Integration Minister Beqaj, accused the prosecution office of being “selective” in who they indicted, and for not daring to include both Kosovo President Hashim Thaci and PDK leader Kadri Veseli in the indictment.

Kosovo media have also criticized the prosecution not only for failing to indict these ‘big fish,’ but also for not interviewing Thaci and Veseli as witnesses at any point during the investigation and trial. It was noted during Hajdari’s interview that failing to do so was odd, given that the wiretaps prominently feature the voices of both Thaci and Veseli.

However, according to Hajdari, it would have been impossible to include Kosovo’s president in the indictment. “There was no legal basis [to indict]. There is not a single conversation where Grabovci and the president are talking about employment,” she stated.

This is not the case, however: a conversation between Thaci and Grabovci was featured in the publicized phone calls, in which Grabovci complains about a family member of his, known as ‘Daja’ or ‘the uncle’ in the wiretaps, having not been employed at the University Clinical Center of Kosovo, UCCK. It was reported that Grabovci’s uncle, Curr Gjocaj, was selected as the director of the University Hospital and Clinic Service of Kosovo, SSHUK, in 2014.

Hajdari stated that the prosecution were unable to identify individuals that were mentioned in the phone calls because of the use of nicknames throughout. “I could not prove who the uncle was, who the friend was, the pal, the boss.”

Hajdari justified the prosecution’s decision not to include Kadri Veseli in the indictment by stating that Veseli held no official position in 2011, which is when the phone calls that were wiretapped took place. “I had no proof that Veseli had influence [at that time],” she said. “A prosecutor cannot build a case on the assumptions, imagination or wishes of anyone.”

According to Hajdari, the prosecution is planning to take the case to the Court of Appeals to challenge the Basic Court of Prishtina’s decision. “The case has not yet failed,” she said.