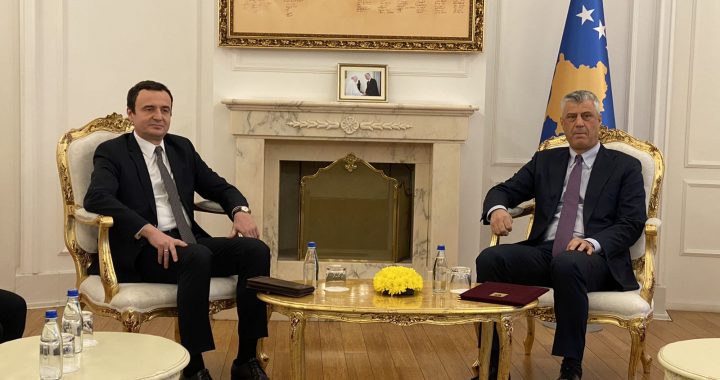 Deadline set on formation of the next government

In a rare meeting between the pair, Kosovo President Hashim Thaci and Vetevendosje leader Albin Kurti briefly discussed the formation of the next Kosovo government on Monday.

“In this meeting of a few minutes, the president expressed his interest in forming the government as soon as possible, and demanded that we make a proposal,” Kurti told a post-meeting press conference.

Under the Kosovo constitution, the president, in consultation with the winning party at the election must propose a candidate for prime minister to the Kosovo Assembly. The candidate then has 15 days to propose a government to the Assembly, which must be voted in by a majority.

In a Facebook post after the meeting Thaci stated that the Vetevendosje leader was not “ready” to propose a candidate. “Therefore, I have decided to offer to Mr. Kurti 48 hours to nominate a candidate for the next prime minister of the Republic of Kosovo before I undertake further constitutional steps,” said Thaci.

Kurti stated that, according to the Kosovo constitution, the proposal must be given in writing, and that he would consult with the leadership of Vetevendosje before submitting a written proposal to Thaci. “We will bring the proposal in written form to the president as soon as possible,” he said, without specifying a date.

The meeting came after Kurti’s rejection of two previous invitations from the president following the constitutive session of the Kosovo Assembly. The session saw Vetevendosje’s Glauk Konjufca elected as Speaker, amid a backdrop of faltering talks between Vetevendosje and the Democratic League of Kosovo, LDK, over the formation of a coalition government.

Despite the parties beginning discussions over a coalition government in October, LDK leader Isa Mustafa described Konjufca’s election as a “return to point zero” for coalition negotiations, having previously issued what he described as “a final offer” to Vetevendosje earlier in the day.

Before his meeting with Thaci on Monday, Kurti published a video on social media in which he described it as the second key step entered without a binding agreement with LDK. “No one thought that the new year would find us with no government,” he stated in the video. “Today on January 6, 2020, I am obliged to go to a consultative meeting with the president without an agreement with LDK, despite my efforts to meet with LDK’s leader.”

In the video, Kurti also proposed the names of six members of the cabinet from his party, urging LDK to do likewise as soon as possible. “I call on the leadership of LDK as soon as possible to send me the names of five ministers and the first deputy prime minister from its side,” he stated in the video, before revealing the names Vetevendosje will propose for some key cabinet positions.

Haki Abazi, who was elected as an MP for the first time in October’s election was proposed as second deputy-prime minister, while Albulena Haxhiu, a four-time Vetevendosje MP has been put forward to take charge of the Ministry of Justice. Blerim Reka, a renowned Albanian diplomat from North Macedonia was proposed as Minister of Foreign Affairs and Diaspora.

Deputy president of Vetevendosje and economics professor Besnik Bislimi has been put forward for the position of Minister of Finances and Transfers, while Rozeta Hajdari, who previously worked at the Austrian Development Agency was proposed as the new Minister of Economy, Trade and Industry. Arben Vitia, former director of the Health and Social Welfare department at the Municipality of Prishtina was proposed as the new Minister of Health and Sport

Kurti promised that the names of ministers from Kosovo’s ethnic minority communities, as well as at least 10 deputy ministers from Vetevendosje would be revealed once LDK put forward their nominations for the first deputy prime minister and five other ministers.

LDK held a meeting of its parliamentary group on Monday afternoon. No public statement was released to reveal the nature of the discussions, though daily newspaper Koha Ditore reported that party leader Isa Mustafa described Vetevendosje as “incorrect and inexperienced,” adding that no official decisions were taken.