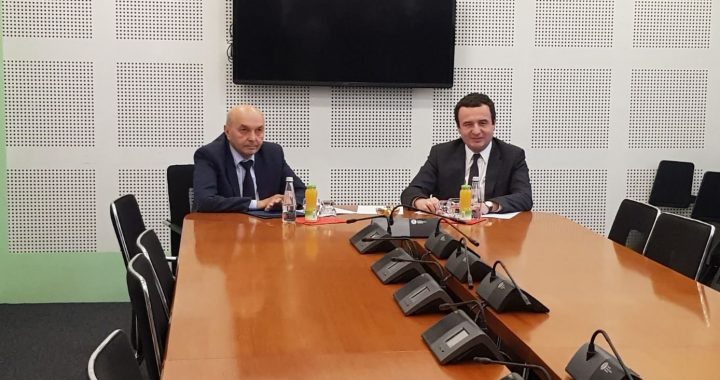 With more than two months having passed since the October 6 parliamentary elections in Kosovo, Vetevendosje and LDK have been pressed by officials from the EU, the US, the UK and Germany this week to swiftly form the next government.

As negotiations to finalize the agreement to form Kosovo’s next coalition government continue into their tenth week, EU officials, the British and US embassies and two members of the German Bundestag have stressed the importance of quickly reaching consensus.

Representatives from the two parties with the largest share of the vote, Vetevendosje and the Democratic League of Kosovo, LDK, first met in the days following the election, but are yet to constitute a government.

A statement issued by EU representatives in Kosovo on Thursday urged the parties to “overcome any remaining challenges.”

“Kosovo needs to resume urgent work on reforms of economic and social development as well as rule of law, on the implementation of the EU-Kosovo Stabilisation and Association Agreement and on the EU-facilitated Dialogue with Belgrade,” the statement from the EU Special Representative, EULEX and the Heads of EU Missions in Kosovo reads.

“A swift government formation is needed to take forward these processes, in the interest of Kosovo and its people and in line with the constitution and the expressed wish of the electorate,” it continues.

The statement was supported by the British Embassy in Kosovo and the Embassy of the United States: “We concur with the EU: the Kosovo people are impatient for a government that will bring positive change,” reads the statement made by the US Embassy on Facebook.

“Time is running out so successful negotiations are needed,” said Beyer, adding that “interference” in the negotiations was not the intention of their visit. “All politicians understand the importance of the responsibility they have after the election to establish a stable government.”

Outgoing Assembly Speaker Kadri Veseli confirmed on Wednesday that a constitutive session of the Kosovo Assembly has been scheduled for December 26, stating that he hopes that “a good legislature” will be formed on this date.

The certified results of the October 6 elections were announced by the Central Election Commission, CEC, on November 27. According to Kosovo electoral law, a constitutive session must be held within the 30 days following the announcement of the certified results to form the next legislature.

In an interview for BIRN’s televised program ‘Jeta ne Kosove’ last Thursday, Kurti said that the two parties have agreed to split the twelve planned governmental ministries between them and appoint a representative of LDK as the Speaker of the Assembly.

However, discussions surrounding who will become the president April 2021 have become a sticking point in the negotiations. Kurti believes that such discussions should take place in the future, stating that making a decision now would be “putting the cart before the horse.”

However, in an interview with ‘Jeta ne Kosove’ the previous week, LDK leader Mustafa stated that he believes discussions related to the presidency should take place before the government is formed. “I think now is the time to discuss all the issues,” he said. “Within the first half of the mandate, we will be challenged with the issue of the president, and we don’t want to neglect challenges that can jeopardize our coalition.”

Kurti has said that Vetevendosje has not offered any potential candidate for the position of president, and expressed support for the view that the president should have no party political background, ensuring a figure that unites the people.

“If you read the constitution, it says that the president should be non-partisan to represent the unity of the people, and I believe that we should seek someone who belongs to everyone and not a single party,” Kurti said.