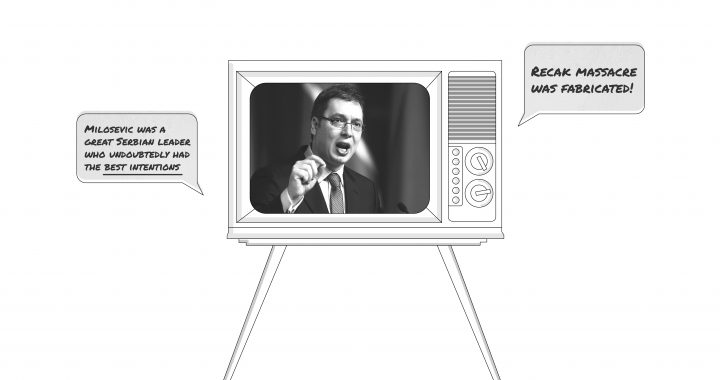 Srebrenica, Recak and the triumph of the lie

Only a concerted effort to preserve and promote the memories and truths surrounding the atrocities committed in the breakup of Yugoslavia can overcome the rise of the ‘alternative fact' argues Aidan Hehir.

In June this year, I visited the memorial center at Potocari, just outside Srebrenica. The former UN military base now houses an exhibition detailing what happened when Srebrenica was overrun by Serbian forces in July 1995. Across the road from the base is the graveyard where the thousands of victims are buried.

I have visited many places where atrocities occurred; they are always, of course, poignant and affecting. But there was something uniquely powerful about Potocari. Many moments there stand out: seeing the exhibition of personal items – toothbrushes, wedding rings, children’s photos – recovered from mass graves; listening to the testimony of those who witnessed their loved ones being forced onto buses; walking through the dorms used by the Dutch troops and reading the nihilistic, at times racist graffiti they left on the walls.

But one experience was especially powerful. My tour guide and I sat behind a group of school children while we were shown a short film. As we watched footage of a group of young boys being led bound and bloodied into the mountains, and then shot by ‘The Scorpions,’ the children in front of us began to cry. Many held hands as they wept.

The International Criminal Tribunal for the former Yugoslavia ruled that more than 8,000 people were killed at Srebrenica, while the International Court of Justice found that the crimes amounted to genocide.

These facts have always been denied by both die-hard adherents to the “Greater Serbia” project pursued by Milosevic, and wilfully deluded “leftists” who appear to view any group confronted by the West as righteous “anti-imperialists.” These used to be marginalized voices confined to the darker recesses of the internet. This is no longer the case.

Outright lies about what happened during the bloody breakup of Yugoslavia have made their way into the mainstream: with the support of a compliant press, government officials across the region now openly advance discredited conspiracy theories as they seek to literally re-write history. Serbian President Vucic’s recent comments about the Recak massacre in Kosovo in January 1999 is just the latest example.

I’ve been an academic for twenty years specializing in atrocity crimes, particularly those committed in the former Yugoslavia. Much of this work is dispiriting, largely because, despite all the solemn pledges made by world leaders and the work suggesting ways to improve the international response, there has been an increase across the world in human rights violations.

Given the lack of any meaningful improvement in the international community’s capacity and willingness to respond to such crises, people like me are effectively left with just one hope: that the details of these events and the memories of the survivors will be collected and stored, and that someday this repository will become the catalyst for change when the weight of evidence tips the balance.

But now even this hope is diminishing; the re-emergence of previously discredited ideologies, and the rise of populism and demagogues, means the evidence itself is being degraded. If the only tool with which we can leverage change is facts and memories, then the character of the new world can only inspire fear.

Today, inconvenient truths are routinely rejected in favor of “alternative facts;” experts are blithely dismissed and derided; and a person’s memory is not their truth, it is “fake news.” Determining what happened is not a matter of establishing truth, but of contriving a convincing story. Those who tell this story most effectively – by presenting their version of events in the most appealing, simplified and media-savvy fashion – are deemed to be the authoritative voices. What is accepted as a historical truth – what we accept as a fact – has become a function of power and expediency.

And so the victims and survivors become victimized once again; through this ‘retraumatization’ their experiences are denied, their pain is dismissed and their lack of power is exploited by those with the means to spread lies. This of course has gone hand in hand with a new willingness – across the world – to talk about identity in an intentionally polarizing way, whereby the ‘other’ is portrayed as degenerate, criminal and dangerous.

Rather than learning from the past – from events like Srebrenica and the hate-speech proliferated by people like Radovan Karadzic which preceded them – we are tolerating the emergence of a political discourse predicated on presenting difference as an existential threat that has to be aggressively tackled. Historical revisionism and the stoking of identity-based hostility – the very things which led to the bloody dissolution of Yugoslavia – are increasingly dominant features of our contemporary world.

Four months after I visited Srebrenica, Peter Handke was awarded the Nobel Prize for Literature. Handke denies that 8,000 people were killed at Srebrenica, and claims that Milosevic and his cabal only ever sought to ‘defend his country’s territory’.

Of course people are entitled to challenge orthodoxy, and artists in particular should do so, but Handke’s case is different. It is impossible to believe that those who visited Srebrenica soon after the massacre – as he did – and toured across Yugoslavia championing Milosevic (Handke visited visited Prishtina in 1996 at the height of the apartheid system then in place) was unaware of the extent to which a great violence had been committed against innocents by a corrupt, racist and violent regime.

It is important to understand that the honoring of Handke, despite his loathsome views, has not occurred in a vacuum, and that the Nobel Committee’s decision says much about our contemporary world. It tells us that the only power victims and survivors have – their memories, their experiences – is not powerful enough.

Decisions are increasingly being made by states, by international organizations, by businesses, purely on the basis of what is expedient. In pursuing their interests, these people are increasingly willing to overlook the inconvenient truths the victims and survivors in many contexts now represent. This, of course, has ominous implications for Kosovo.

Witness the lengths the EU is going to in order to facilitate Serbia’s integration with the “West” and how Kosovo has increasingly become little more than an inconvenience in this endeavor.

President Vucic’s naked authoritarianism, his description of Milosevic as a “a great Serbian leader who undoubtedly had the best intentions,” and his steadfast refusal to atone for the violence wreaked by Milosevic’s government – of which he was a part – don’t appear to meaningfully factor into decisions made about how Serbia should be treated by the EU.

When Vucic claimed that the massacre at Racak was “all fabricated,” or when Prime Minister Brnabic refused to admit that Srebrenica was an act of genocide, they did so knowing that these lies damage the victims and survivors, but not their own positions of power.

The reality is that Serbia – with the support of the EU – is wresting back control of the dominant narrative on the past, the present and the future. This leaves Kosovo – and more importantly the victims and survivors – in a very vulnerable position.

If Kosovo’s new government does not directly seek to redress this trend, at least by putting more meaningful effort into establishing a victim-centered approach to establishing the facts about the crimes committed by Serbian forces in the 1990s, Kosovo will remain relegated to a secondary concern, and the victims of the crimes committed in the 1990s will be marginalized.

All around the memorial site at Potocari there are signs reading, “Don’t Forget Srebrenica.” Initially I thought the sentiment was noble but a little alarmist. After all, I thought, who could forget Srebrenica? But since Handke was awarded the Nobel prize, the message reads like a plea that is being increasingly ignored. As the 25th anniversary of the Srebrenica massacre approaches not only have we not improved our ability to prevent or stop such barbaric acts, we actually appear to be questioning whether they even happened.

I can’t believe that anyone who goes to Srebrenica – or Racak – wouldn’t feel the weight of tragedy hanging in the air and buried the soil as I did. Few get the chance to do so. Those who do visit have a responsibility to recount their experiences, so that the power of these memories is recognized, and some, at least, don’t forget.