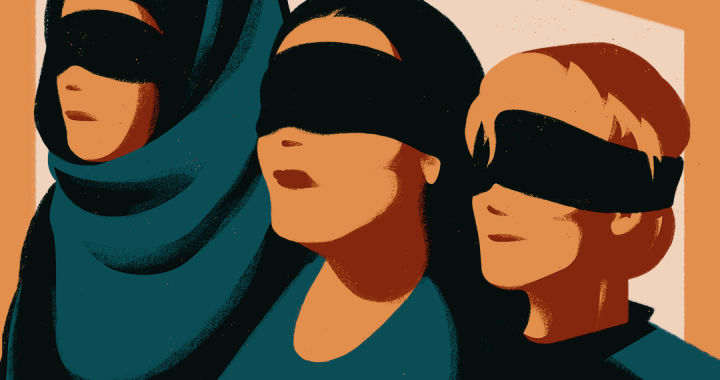 ‘The rapist is you:’ Kosovo joins global anti-violence movement

A group of Kosovo activists will join thousands of women around the world who have been chanting and stomping blindfolded outside government buildings, challenging men to consider their role in institutionalized violence against women under the slogan: ‘The rapist is you!’

A demonstration is taking place in Prishtina at 12:00 on Tuesday, where protestors challenging Kosovo’s public institutions and their complicity in upholding gender-based violence will perform an artistic work outside the Kosovo Government titled ‘Dhunuesi je ti!’ or ‘The rapist is you!’

‘The rapist is you’ is a translation of ‘El viador en tu camino,’ which literally means ‘The rapist in your path.’ It is the name of a song written by a Chilean feminist theater group that was performed by thousands of women in Santiago on November 25, 2019, to raise awareness of sexual violence as a political rather than a private problem.

The song and accompanying dance, choreographed by the Chilean activists, has been performed by women in countries all over the world, including Albania, the United States, Turkey, Kenya, Mexico, Colombia and Greece, who have helped transform it into a global feminist anthem.

The Prishtina performance of ‘The rapist is you’ will take place in Skanderbeg Square, surrounded by Kosovo’s public institutions. “We chose this location so we can physically point the finger at all of them, the courts, the government, the parliament, show them that they are the abusers. They will be our audience,” said one of the organizers, explaining that they are protesting against the ways in which Kosovo’s political and judicial systems reinforce gender-based violence in their decision making and retraumatize those that report and attempt to seek justice for gender-based violence.

The group of activists in Kosovo saw the same demonstration in Tirana a few weeks ago, and decided to organize a similar protest in Prishtina. Demonstrators will be donning blindfolds for Tuesday’s performance, and the organizers explained to Prishtina Insight why they have decided to remain anonymous: “We decided that we didn’t want to be identified with any single person or institution. The blindfolds are covering our eyes as we face the government, also representing institutions that turn a blind eye towards violence against women.”

In a survey published by the OSCE in January 2019 on the wellbeing and safety of women in the Balkans, 48 per cent of Kosovo respondents agreed that domestic violence is a private issue that should be handled within the home.

At the same time, the European External Action Service’s 2018 report on justice for gender-based violence said that up to 68 per cent of women in Kosovo could be subject to domestic violence, but that the majority of cases go unreported due to this continued perception that domestic violence is a private matter, the fear of stigmatization and embarrassment, and the overall low trust in rule of law institutions all hindering an increase in reporting.

The blindfolds the protestors will wear thus have even more significance. They are also intended to symbolize the women that Kosovo institutions will never see or hear, the organizers explained, creating a collective voice for those whose domestic situation prevents them from raising their voice against violence.

“There is power in anonymity,” one organizer told Prishtina Insight. “We represent women who are invisible to Kosovo’s institutions, that are not in a position to come forward and speak out. Violence can happen to every woman, no matter where they come from, what their age or their background is. With blindfolds, we show we represent everyone.”

The organizers believe that the demonstration gained traction internationally because of the way that dancing and singing are used as a form of social activism. The strong visual representation of the activists’ message through angry, stomping choreography challenges not just the traditional understanding that women should be quiet and submissive, but it also allows for emotional expression in a way that more traditional forms of political protest cannot.

“Using art, music and performance in demonstrations like this is a more subtle way of addressing problems, and is effective when it is a problem as serious as violence,” the organizers said. “We forget how powerful music can feel, and how incredible it is using your whole body to protest for something.”

The activists expressed hope that one day, more women in Kosovo would be able to experience these feelings: “In most of Kosovo, women are not welcome in public spaces. Feminist movements start when women find their own spaces to sit together and talk about the problems they have faced. It’s as simple as that.”

Kosovo’s Haveit collective was another inspiration for the organizers of Tuesday’s demonstration. The collective’s most notable artistic protest challeging institutional violence against women was in 2018, when they erected three billboards on Luan Haradinaj street outside the Kosovo Police headquarters, reading “How many more missed calls?”, referencing the murders of Diana Kastrati and Zejnepe Bytyqi, who were killed by their husbands after trying to alert the police.

“They introduced the idea of using art as a form of protest to Prishtina, and it is important that this continues with other young artists and students, too,” one activist told Prishtina Insight. “I want more people to do the same, to create their own intervention in public spaces.”

The organizers said that they hope to send a similarly simple yet powerful message. “This time we are showing them that we are here, women together, in front of the government, telling them ‘We know you are abusing us and we are here to end it.’”

‘The rapist is you!’ will be performed on Tuesday at 12:00 at Skanderbeg Square in Prishtina. The activists invite everyone to join in or watch the performance. For more information, check out the Facebook event.