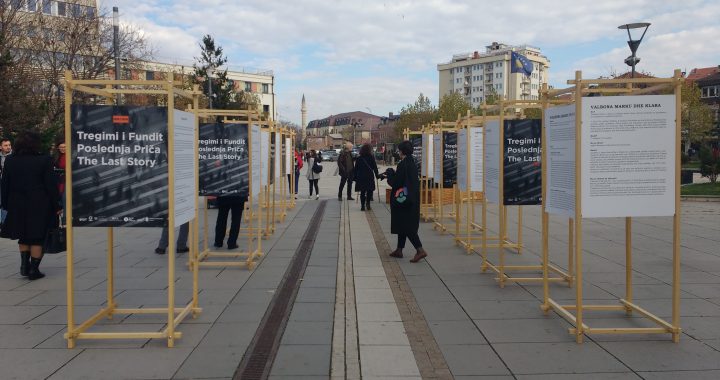 To mark the International Day for the Elimination of Violence against Women, an installation named ‘The Last Story’ featuring the names and stories of victims of femicide and domestic violence is being displayed outside the Kosovo Assembly building from Monday, November 25 to Wednesday, November 27.

The installation details the circumstances of the deaths of 11 women in Kosovo over recent years, the same number that have been killed between 2017 and 2019, according to Kosovo Police reports. It was designed and implemented by the Kosovo Center for Counselling, Social Services and Research, SIT, and aims to commemorate these women and raise awareness among the public, as well as government and parliamentary officials, concerning the prevention of domestic violence.

“The stories of women who are being killed year by year are still kept private, and all we get to see are numbers and statistics,” said Mirishahe Syla, a gender advisor at SIT. “We want to allow people to have more connection to the women themselves. We called the installation ‘The Last Story,’ because this really is the last story of these women, and we hope that this will make people really feel what happened to these women and understand how serious a problem domestic violence is.”

Syla hopes that putting the details of their deaths in the spotlight will help the public to see beyond the statistics and reframe the nature of conversations surrounding domestic violence in Kosovo.

“Domestic violence is a public, not a private issue,” she said. “When we talk about domestic violence we don’t tend to see it as a crime, or we see it as only physical and not psychological violence. We chose this location so the public gets engaged and sees something in these stories that might seem familiar to them: everyone has families, husbands, wives, kids, and this would maybe speak to them on a closer level.”

SIT have also included a public commitment form as part of the installation, in the hope that newly elected MPs and other representatives from public institutions will sign the declaration and show their commitment to ending domestic violence.

Among the current signatories is civil servant Albana Lumi, who urged institutions to express their commitment to SIT’s initiative: “I think that all the institutions should react as quickly as they can,” she said. “They need to be quick in their response so that we can end domestic violence before things get this bad, and we continue to see women and girls being killed.”

SIT has also been engaging in violence prevention efforts by working with high school students around Kosovo. “We ask students ‘what is violence?’” Syla said. “Most of the time they can identify it, but many realize they have seen, experienced or perpetrated it without actually knowing it is violence.”

According to Syla, introducing open and frank conversations about violence to young people as early as possible is one of the most effective ways to combat domestic violence. “After discussing it, you can see the students becoming more confident,” she explained. “Once they know that what they are experiencing is not okay and that violence is not normal, it makes them more empowered to fight against it and prevent it.”

If you have ever been affected in some way by sexual, gender-based or domestic violence, assistance and reporting mechanisms can be found through the Victims’ Assistance and Advocacy Division of the Kosovo Prosecution (0800 11 11 2) and the Kosovo Police hotline (0800 1 99 99).