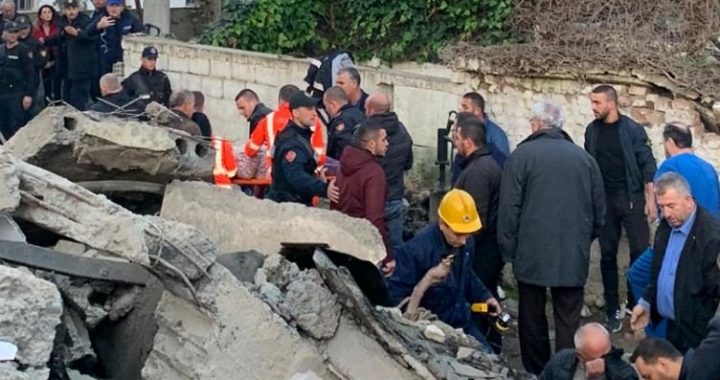 Emergency services are already on hand to search for survivors of the 6.4 magnitude earthquake that hit Albania on Tuesday morning. Photo: Top Channel Albania.

Members of the Kosovo Security Force have been dispatched to Albania to assist in rescue efforts after a 6.4 magnitude earthquake caused buildings to collapse, burying residents inside. Six deaths have been confirmed so far, while hundreds more are seeking hospital treatment.

A 6.4 magnitude earthquake hit Albania early on Tuesday morning, bringing down buildings and causing fatalities in Durres and the region northwest of Tirana. The earthquake was felt across the region, including in Kosovo, and was followed by a number of aftershocks, with as many as 18 being reported throughout the morning.

At 8:30, Albania’s Ministry of Defense confirmed six known deaths: three in the city of Durres, two found in the rubble of an apartment building in Thumane and one in the municipality of Kurbin. Health minister Ogerta Manastirliu said 300 injured people were being treated in Durres, Tirana and Thumane, with more arriving to hospitals throughout the morning.

According to reports from the Report TV television channel, two Kosovars were inside Hotel Tropikali in Durres, which collapsed in the earthquake. One was said to have been discovered alive, while the other had died.

Search teams continue to look for people buried under the rubble of collapsed buildings. Albanian Prime Minister Edi Rama announced that the state was “working intensively to save every possible life” and has asked for solidarity among the people. “It is a dramatic moment where we should keep calm, stay close to each other and deal with this blow together,” he said.

Kosovo President Hashim Thaci confirmed that members of the Kosovo Security Force were already on their way to the affected areas to assist. “On behalf of the citizens of Kosovo, Prime Minister Rama, I express my most sincere condolences to the victims of the earthquake,” Thaci wrote on Facebook. “I assured Prime Minister Rama that Kosovo will back and support Albania.”

The Albanian Institute of GeoSciences, Energy, Water and Environment has advised people to stay outdoors, but confirmed that the most powerful shocks have already passed. The Ministry of Education announced that schools will be closed nationwide, and there are reports of power being down in many cities across the country.

This is the second earthquake in a matter of months in Albania. On September 21, an earthquake of 5.6 magnitude shook the country, cracking buildings and leaving cars damaged by falling debris.